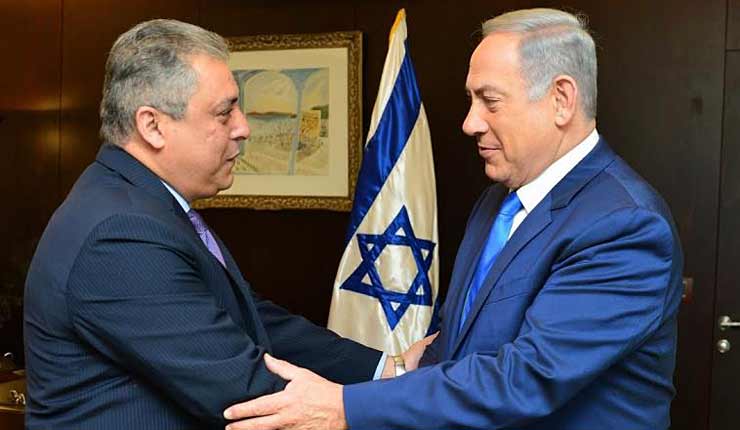 On the 39th anniversary of Sadat’s speech in Jerusalem, the two countries have never been closer, analysts say

Although many Egyptians continue to regard Israel as a threat and sympathise with the Palestinian cause, the relationship between the two countries has become markedly explicit under President Abdel Fattah el-Sisi.

And it certainly appears so.

In 2016, Egyptian foreign minister, Sameh Shoukry, visited Israeli Prime Minister Benjamin Netanyahu in a much-publicised meeting at the latter’s home in Jerusalem. It was the first visit by any Egyptian FM in close to a decade. Netanyahu said the two “made time to watch the Euro 2016 final” football game together.

Egypt also reinstated an ambassador to Tel Aviv this year, following Morsi’s decision to pull out the envoy in protest against the 2012 Israeli assault on Gaza.

In 2015, the Israeli embassy in Cairo was reopened after a four-year closure, due to protests in front of the embassy over Israel’s killing of several Egyptian police officers in the Sinai. And, in the same year, Egypt voted in favour of Israel to become a member of a United Nations committee – the first time that Egypt has voted for Israel at the UN since the creation of the Jewish state in 1948.

Such examples are only a few of the many developments that signal a new chapter in this relationship, which Mohamed Soliman, a Cairo-based political analyst, characterises as a “full partnership, unbreakable alliance and diplomatic completion” between the two countries.

The alliance, analysts say, has been predicated on military and security cooperation, mainly with regard to the armed groups operating in the Israeli-occupied Gaza Strip and the Egyptian Sinai desert.

The two have worked together to battle the Sinai insurgency, where allies of the Islamic State of Iraq and the Levant (ISIL, also known as ISIS), have gained momentum in recent years.

Thrall says Israel “has repeatedly allowed” Egypt to bring forces and weapons into the Sinai beyond the scope of the peace treaty.

Israel’s willingness to allow Egypt to deploy into areas that clearly defy the security appendix of the Camp David Accords demonstrates a “flexibility and coordination between Egypt and Israel [that came] early in Sisi’s tenure,” Soliman told Al Jazeera.

The relationship between the two countries has become so lucid that there have been multiple, but unconfirmed, reports of Israel carrying out drone strikes in Sinai with Egypt’s consent.

The common ground has also extended to a dislike of Hamas, the political and armed movement that governs two million Palestinians in the occupied Gaza Strip. Egypt has accused Hamas of being linked to the Muslim Brotherhood, while Israel considers it a threat to its sovereignty.

Since Sisi’s coming to power in 2014, Egyptian authorities have kept the Sinai border crossing with Gaza largely sealed. The move has suffocated its residents, whose only other passage to the outside world is through Israel, which imposes an airtight blockade.

Besides keeping their borders shut, the two countries cooperated in the most recent destruction and flooding of the vast Palestinian-built tunnel network between Gaza and the Sinai, analysts say. The tunnels, used for everything from smuggling people out and KFC in, are viewed as a threat to both Israel and Egypt. Both sides claim the tunnels were being used for weapon trade.

“Egypt and Israel view the tunnel economy between the Sinai Peninsula and Gaza as a clear and present danger. Cairo knows that the tunnel economy enriches smugglers on the Sinai side – many of whom have ties to the local Islamic State branch – while Israel is well aware that it bolsters and arms Hamas in Gaza,” Oren Kessler, deputy director of Foundation for Defense of Democracies, a DC-based think-tank, told Al Jazeera.

“Egypt has taken an uncompromising approach to destroying the tunnels, and has worked with Israel to do so.”

While cooperation over the flooding of the tunnels has not been announced publicly, Israel’s energy minister, Yuval Steinitz, stated that some flooding took place at Israel’s request, but he was reportedly forced to retract his claims.

Aside from military cooperation and common enemies, Israel and Egypt have found mutually beneficial economic opportunities in gas, in a partnership that predates Sisi’s arrival.

Until 2012, Egypt had been selling natural gas to Israel as part of a 20-year deal that was cancelled. According to Bloomberg, the two countries are now close to securing a new multibillion-dollar deal that would see Israel export gas to Egypt.

In May 2016, Sisi committed Egypt as a middleman between the Israelis and Palestinians. His FM’s visit to Jerusalem in July was subsequently publicised as part of Egypt’s initiative to push for peace.

Safa Joudeh, a Cairo-based political and security analyst, believes the calls for peace are merely a cover aimed at distracting Egyptians. “Renewing peace talks between Palestinians and Israelis was largely a smoke screen for Egypt to pursue closer diplomatic ties with Israel, while avoiding public backlash,” Joudeh told Al Jazeera.

The visit also took place at a time of local discontent over Egyptian foreign policy on issues that “are deemed more pressing” she said, which “raises the question of the timing [of Shoukry’s visit].”

“Although the rapprochement initiative is unpopular with the Egyptian public,” said Joudeh, “there was no adverse reaction to Shoukry’s visit as it was largely overshadowed by all the other foreign policy debates within the public sphere,” including the transfer of two Red Sea islands to Saudi Arabia and tension over Ethiopia storing Nile water behind its dam.

While in theory, the concept of closer Egyptian-Israeli ties is potential for pushing Palestinian-Israeli peace talks along, analysts say they are having an opposite effect by creating intra-Palestinian division and diverting Israeli responsibility to come to the negotiating table.

Israel has for years stalled and ignored US calls to halt illegal settlement building in the Israeli-occupied Palestinian West Bank and East Jerusalem. A French proposal to restart the talks this year was also bluntly rejected by Israel, claiming it would only agree to direct talks.

“Egyptian involvement could reduce international pressure on Israel over its lack of serious steps towards negotiating with the Palestinians,” said Soliman. “Sisi’s initiative does not cost Netanyahu anything other than more negotiations”.

Elie Podeh, head of the Middle East studies department at the Hebrew University in Jerusalem, agrees. He says Israel “is indeed interested in diverting the Palestinian question by getting closer to the Arab states”.

But crucially, he believes the Zionist state’s standing with Arab countries, as a whole, will not improve if it does not move forward on the peace process.

With Israel in a position of power, some believe it cannot be talked into making any concessions. For instance, Waleed al-Modallal, head of political science at the Islamic University of Gaza, says that it is not clear to him “how Egypt would be able to pressurise Israel into responding to the rights of the Palestinians.

“It seems that it is the other way round – that Egypt will pressurise Palestinians to relinquish more and more for Israeli objectives,” Modallal told Al Jazeera.

Instead, Modallal argues “the resistance movement”, particularly Hamas, has the most to lose in this new alliance. He also questions Egypt’s role as an honest broker between the Israelis and Palestinians, given its “negative attitudes towards the Palestinian cause, whether in contributing to the continued siege on Gaza or turning a blind eye to the Israeli aggression on the strip in 2014.

In fact, as Israel and Egypt tighten the noose on Gaza, the rift between Hamas and Fatah, the ruling party of the Palestinian Authority in the West Bank, is thought to be widening.

“Mahmoud Abbas and his Fatah movement likely take quiet satisfaction in the fact that both countries take a hard line against Fatah’s archrival Hamas,” Kessler says.

While the PA is “engaged in a concerted campaign to isolate Israel diplomatically, and is, therefore, disappointed to see its fellow Arabs embrace Israel in any way,” it also “cautiously welcomes any steps to rein in Hamas,” Kessler continued.

But there is a third dimension.

Playing on regional rifts in the Arab world, with the divide between the Gulf states and Iran, Israeli officials and analysts speak of an unofficial “moderate axis” of Arab countries that are purportedly working behind the scenes with the Israeli government.

In this “alliance”, Western-backed countries including Egypt, Turkey, Saudi Arabia and several of the Gulf states, as well as Jordan and Morocco, are said to be pitted against “common enemies” Syria, Iran, ISIL, Hamas and the Muslim Brotherhood.

Kessler believes the tighter Egyptian-Israeli partnership is “being received with quiet approval by traditional US allies in the region, such as the monarchies of the Gulf states and Jordan, who see those relations as useful in confronting shared adversaries.

“More broadly, those ties help shore up the camp of those relatively pro-Western regimes against the ‘resistance’ camp led by Iran and its proxies including the Syrian regime and Hezbollah,” he added.

Modallal, however, says this strategy will only mean more divide and instability for the region.

“Israel’s success in creating an ‘axis of relatively moderate states’ allows it to suffocate Iran by creating a basis for regional cooperation against it. This would fuel the conflict between the Arabs and Iran, in a way that would lead to the destruction of Israel’s two foes at the same time.”

He says that given the lack of any Arab country that could challenge Israel’s strength, strengthening this divide will allow Israel to achieve its strategic goals, and secure its superiority, while Arab countries are mired in conflict.

Egypt’s foreign policy towards Israel today is not much different from that of Mubarak’s, who, like Sisi, was a former military man.

The main aspects of bilateral ties, explains Joudeh, have remained intact, as historically, the relationship with Israel has been handled by the Egyptian army.

But the difference now, she says, is that under Sisi and his military-backed government, “the lines between political decision-making and national security strategy have become blurred”.