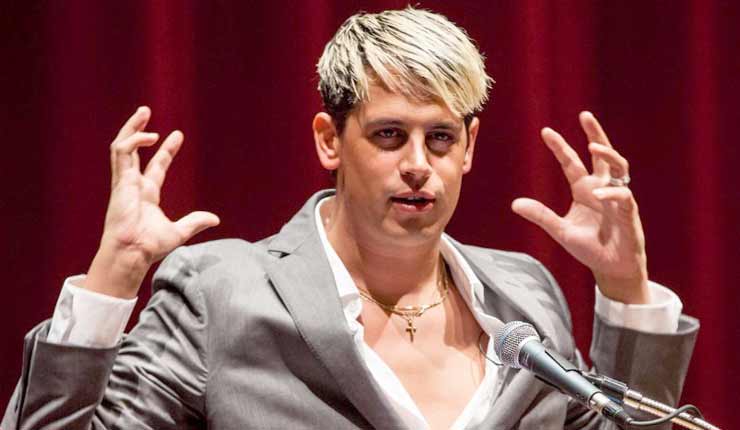 One of Donald Trump‘s most provocative supporters has been barred from speaking at his former grammar school in the UK after the Government’s counter-extremism unit intervened.

Milo Yiannopoulos, a 32-year-old  British journalist who has become the face of America’s “alt-right” movement, was due to speak this evening at the Simon Langton Grammar School for Boys in Canterbury.

However, James Solderholm, the school’s director of humanities, yesterday disclosed that the event had been cancelled after the Department for Education raised concerns about security and potential “reputational issues”.

He accused the Government of casting doubt on “both the pastoral care and intellectual preparation we offer our students” and said that the school will resist censorship and “remain committed to the principle of free speech and open debate”.

Mr Yiannopoulos accused Theresa May, the Prime Minister, of being a “total fascist” and accused her of deploying “sinister counter extremist goons” to bar him from speaking.

A journalist for the US right-wing website Breitbart, Mr Yiannopoulos has gained celebrity status among Mr Trump’s suporters for his aggressive and deliberately offensive sense of humour.

He was banned from Twitter in July after he was accused of harassing Leslie Jones, a black actress online who starred in the new Ghostbusters film. He has previously equated Islam with “rape culture” and boasted about Breitbart headlines such as “would you rather your child had feminism or cancer?”.

Since being banned from Twitter, Mr Yiannopoulos, who is gay, has embarked on a series of lectures at universities in the US named the “dangerous faggot tour”.

During an address to students at DePaul University in Chicago, black protesters stormed the stage and grabbed the microphone over his attacks on the Black Lives Matter movement.

The university’s president issued an apology and subsequently stepped down. Mr Yiannopoulos was invited to speak at his former school, from which he was expelled, by Professor Soderholm.

A total of 220 sixth formers had signed up for the event with the consent of their parents. But on Friday the Department for Education’s counter-extremism task force contacted the school after receiving a complaint from a member of the public.

While the unit has no power to ban speakers, it raised concerns about security surrounding the event as well as the potential of long-term damage to the school’s reputation. The event was subsequently cancelled.

Professor Solderholm said: “The staff and students of the school were overwhelmingly in favour.

“While disappointed that both the pastoral care and intellectual preparation we offer to our students has been called into question, we at the Langton remain committed to the principle of free speech and open debate and will resist, where possible, all forms of censorship.”

Mr Yiannopoulos, who previously worked for Telegraph Media Group, claimed that the school had been “bullied” into cancelling his talk.

“Who even knew the DoE (sic) had a counter-extremism unit?,” he asked on Facebook. “And that it wasn’t set up to combat terrorism but rather to punish gays with the wrong opinions? Perhaps if I’d called the speech “Muslim’s are awesome” they’d have left us alone. Disgusted.”

He later told The Sun newspaper: “So everybody’s worst fears that Theresa May is a total fascist have been confirmed by her sinister counter extremist goons.

Roger Gough, Kent County Council’s councillor for education, said that the cancellation was “up to the school” but said that those with “unsavoury” views should be challenged.

He said: “Direct sunlight is sometimes the best disinfectant. I’ve met some of the students and they are very bright and capable young people. I’m sure (Yiannopoulos) would not be in for an easy night.”

A spokeswoman at the Department for Education said: “When concerns are raised by members of the public following media coverage in advance of an event, the department would contact the school as a matter of routine to check they had considered any potential issues. “The decision to cancel the event was a matter for the school.”

Mr Yiannopoulos speaks frequently at universities and was given a hero’s welcome at the University of California, Santa Barbara, in May. Seated on a throne, he was was carried to the stage by a group of  men wearing caps bearing Trump’s “Make America Great Again” slogan.