Proud Palestinians must lead the fight to reform UNRWA 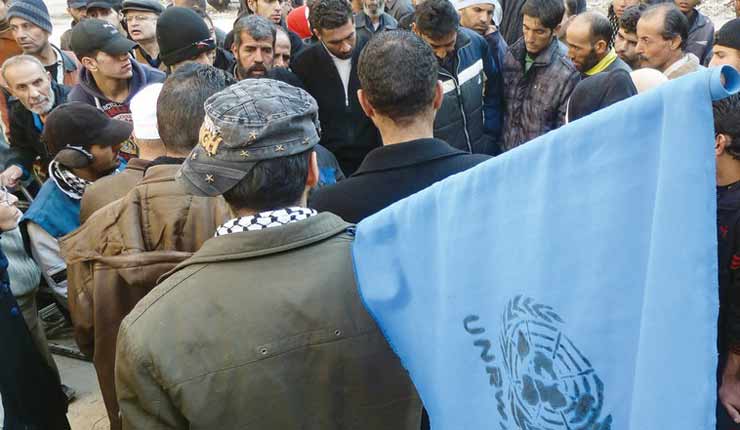 “We can no longer deny our responsibility for the future of our people.”

We Palestinians can no longer deny our responsibility for the destiny of our people. For 26 years I have been devoting my life to the mission of defending human rights. I have seen wars and terror. I live in Jerusalem and was brought up in an United Nations Relief and Works Agency (UNRWA) refugee camp in Shuafat, a refugee camp like 58 other UNRWA refugee camps created for the sole purpose of keep Palestinian Arab people in “temporary” conditions, for 65 years, under the false pretense and specious promise of the “right of return” to pre-1948 villages that do not exist.

As a proud Palestinian, I must take responsible for what will happen to our people.

We can no longer deny our responsibility for the future of our people.

UNRWA, to continue its operation, depends on death and the visual suffering of five million Palestinians who continue to wallow in and around UNRWA facilities.

The more Palestinians suffer, the more power goes to UNRWA, which allows it to raise unchecked humanitarian funds and purchase munitions. People ask: Why not abolish UNRWA? Well, this cannot be done.

The only agency that can abolish UNRWA is the UN General Assembly, which has never had the interests of the Palestinian people at heart. After all, the UN rakes in more than $1.2 billion a year as an “incentive” to continue our status as refugees.

People ask: Why not ask the donor nations to defund UNRWA? Do they not realize that a Western defunding of UNRWA would allow nations like Qatar to enter the vacuum, leaving the West with no leverage over UNRWA policy? The point is to influence donor nations to reform UNRWA and predicate future aid to UNRWA on reasonable conditions:

1. Audit all funds allocated to UNRWA, which operates with a $1.2b. budget.

3. Cancel the UNRWA war curriculum, based on principles of jihad, martyrdom and right of return by force of arms.

5. Dismiss UNRWA employees affiliated with Hamas, defined by the donor nations to UNRWA as a terrorist entity.

It is therefore the responsibility of the Palestinian people to rebel against the arbitrary administration of UNRWA, which seeks to perpetuate our refugee status instead of helping our people to strive for a better future.

The Palestinians see that UNRWA is continually cutting back on its activities, devoting most of its budgets to health and education.

UNRWA claims that this is because the contributing countries have not upheld their commitments regarding the transfer of funds. Furthermore, UNRWA provides many more services to the Gaza Strip than it does to the West Bank, and this even further infuriates the residents of the West Bank. Moreover, UNRWA has not raised the salaries it pays to its local workers for years, and, in many cases, has even neglected to pay its workers for months at a time –thus enraging the Palestinians even further and leading to numerous strikes and conflicts.

UNRWA has not conducted a census within the refugee camps for some two decades, and so the organization cannot know how many refugees are living in the camps in the Occupied Territories and in the Diaspora. To this day, the numbers remain unclear. While one source says there are 2.5 million refugees, the Palestinian Authority claims that the number is higher than 6 million. UNRWA, which should be the authoritative source, is silent. So on what figures is UNRWA basing its requests for funds? Do the contributing countries have any idea of what they are contributing to? The Palestinian refugees have lost all hope that UNRWA will make any effort to return them to their original lands (right of return) and they believe that they will have to settle for compensation. But they are concerned that if they don’t bring pressure to bear on UNRWA, these monies, too, will be swallowed up by its vast organizational apparatus.

In my opinion, it is essential to carry out a comprehensive investigation within the refugee camps throughout the entire Middle East, not only to ascertain the precise numbers of refugees, but also to understand what the Palestinian want for themselves, what they wish for, and what they believe they can reasonably expect.

In the eyes of the Palestinians, UNRWA acts a state with its own foreign policy.

And that foreign policy does not serve the best interests of the Palestinian refugees.

The author is the founder and director of the Jerusalem-based Palestinian Human Rights Monitoring Group. This article will be part of a special presentation to the British Parliament sponsored by the London-based Henry Jackson Society and the Jerusalem-based Center For Near East Policy Research.


Pamela Geller : As a Jew, I Stand with Steve Bannon Sweden paid ISIS fighter $600 a month in child benefits