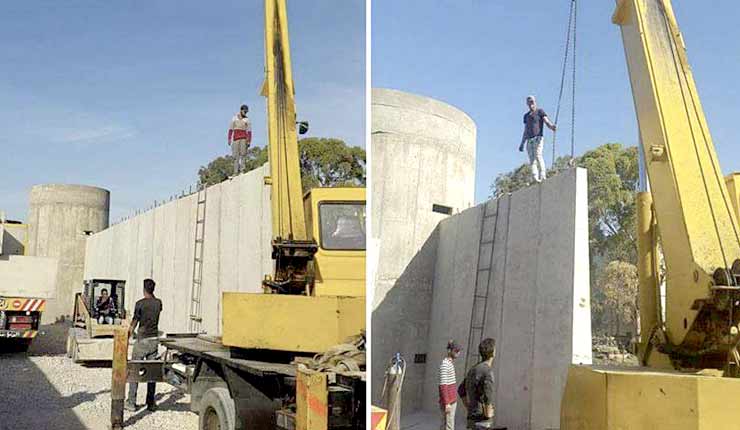 The first blocks of an isolation wall were erected around the largest Palestinian refugee camp in Lebanon this week, as a plan to build ‘security’ cordones and watchtowers around Ain al-Hilweh came into effect.

The isolation wall is set to be completed within the next 15 months, according to a report by Lebanon-based al-Modon news site.

“The construction of the wall aims to decrease the confrontation between [the camp’s] inhabitants and the army.”

Despite being approved by Palestinian leadership in Ain al-Hilweh, located southeast of the port city of Sidon, for thousands living in the overcrowded camp life will only worsen.

Angry Palestinians took to social media to voice their frustration, dubbing the watchtower “the wall of shame” and comparing it to similar Israeli measures.

Those residing in the southern edge of the camp voiced complaints as the wall expected to sit a mere 3 metres away from their homes, according to reports on the construction plans.

[Translation: This image is not from the occupied Palestinian territories. This is a picture of the wall of shame – the apartheid wall built by the Lebanese authority around Ain al-Hilweh refugee camp]

Authorities in Lebanon maintain the security watchtower will enable the army to better control the camp amid claims that militants linked to the Islamist factions seek refugee there.

In September, Islamic State group’s top commander in Lebanon, Imad Yassin was arrested at his hideout in an overnight raid on the camp.

Ain al-Hilweh camp is home to over 70,000 registered Palestinian refugees, who were recently joined by thousands of Palestinians fleeing the conflict in Syria.