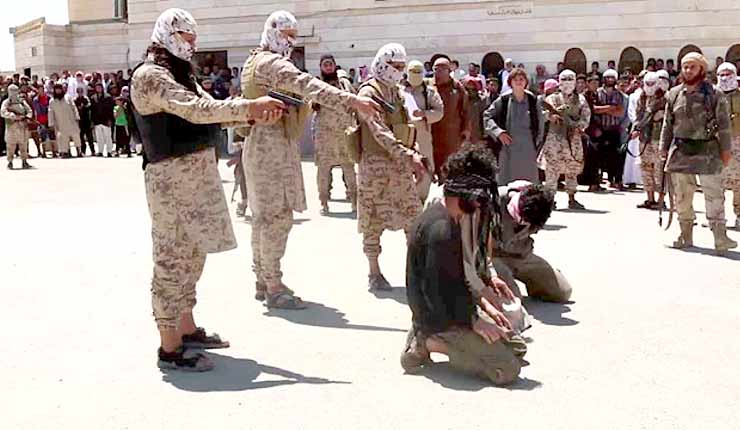 A TOP British official has taken aim at some Muslim nations during a meeting at the United Nations this week, slamming them for not clamping down on extremism

It comes as it can be revealed just 18 out of 57 Muslim majority world states have signed up to a coalition against ISIS.

The UK’s permanent representative to the UN, Matthew Rycroft, delivered a strongly worded speech blasting what he called “evil groups” and saying not enough is being done.

The comments came as the UN general assembly supported a plan by the Islamic Development Bank to invest £7.2bn to tackle the cause of terror.

Britain is using its muscle at the UN to encourage more cooperation and has also pledged to invest £20m of taxpayers’ money to the Arab Women’s Enterprise Fund.

Mr Rycroft said: “One issue facing the OIC’s (Organisation of Islamic Cooperation) members, indeed all members of the UN, is the growing threat of extremist ideologies and violent extremism.

“Sadly, as we in this Council know only too well, this threat affects Muslim majority states in a truly disproportionate way – in Iraq, in Syria, in Libya, in so many places.

“Put simply and starkly, far more Muslim men, women and children have lost their lives at the hands of groups like Al Shabaab and Da’esh than any other faith or religion.

“The fact that these evil groups claim to represent Islam only makes this reality even more sickening.

“The United Kingdom is clear that we must tackle violent extremism in all its forms, whether radical Islam or neo-Nazism.”

Worryingly, Mr Rycroft pointed out that just 18 of the 57 member states, with a collective population of over 1.6 billion – that makes up the Organisation of Islamic Cooperation which was founded in 1969 – are members of the Global Coalition against Da’esh.

It comes after the UK set up a Strategic Communications Cell to tackle terrorists in London last year, handing over an initial £10million.

“Among them are of course our colleagues from Egypt and I want to pay tribute to the work of those two great Egyptian institutions, Al-Azhar and Dar Al-Ifta.

“These beacons of Islamic thinking help provide a narrative of tolerance that counters the hate preached by the likes of Da’esh.

“The UK is committed to help spread that narrative, to showing the reality of Da’esh’s lies.

“That’s why we’re hosting the Coalition’s Communications Cell in London.

“It draws on the expertise of Coalition members, including our partners from the United Arab Emirates, to help counter the misrepresentation of Islam and its values by Da’esh.

“Countering an ideology is part about offering a competing narrative.

“But it’s also about delivering consequences for those who join Da’esh and it’s about supporting survivors of their crimes by giving them a voice and ending impunity.

“Da’esh accountability is a top priority for the UK and we are seeking UN action to preserve evidence of Da’esh’s crimes as a first step.”


ISIS is increasing its presence, recruiting Uzbek militants in Pakistan ISIS and Palestinians: Both groups indoctrinate children to kill