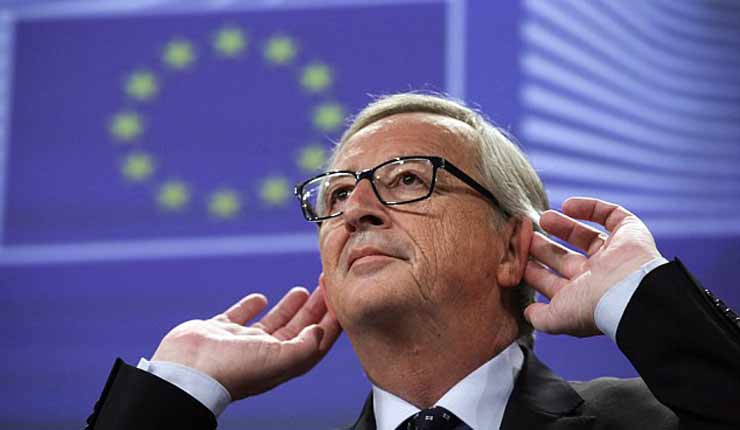 In Europe, is the enemy now the governments? Evidence is mounting that expressing even a mild opinion that runs counter to official government policy can land you in prison, or at least ensure a visit from your friendly local Kafkaesque police. Has Europe effectively become a police state?

Several European governments are making it clear to their citizens that criticizing migrants or European migrant policies is criminally off limits. People who go “too far,” according to the authorities, are being arrested, prosecuted and at times convicted.

In the Netherlands, the police visited people who naïvely made critical comments about asylum centers on Twitter in October 2015. In the town of Sliedrecht, police came to Mark Jongeneel’s office and told him that he tweeted “too much” and that he should “watch his tone”: his tweets “may seem seditious”. His offense? The town had held a citizens meeting about a refugee center in the region, and Jongeneel had posted a few tweets. One said: “The College of #Sliedrecht comes up with a proposal to take 250 refugees over the next two years. What a bad idea!” Earlier he had also tweeted: “Should we let this happen?!”

He was not the only one. In Leeuwarden, according to New Europe:

“…about twenty opponents of the plans [to establish asylum centers] in the region received police visits at home. It also happened in Enschede, and in some places in the Brabant, where, according to the Dutch media, people who had been critical of the arrival of refugees and ran a page on social media on the topic were told to stop”.

A spokesperson for the national police explained that ten intelligence units of “digital detectives” monitor Facebook pages and Twitter accounts in real time, looking for posts that go “too far,” so that they can visit with people to tell them “what effect a post or tweet on the internet can have.” In other words, the Netherlands are engaging in state censorship, thus raising the question: Is the Netherlands now a police state?

In the United Kingdom, Scott Clark was arrested in February 2016 for writing on the Facebook page of the Scottish Defense League that Syrian refugees would “see the nasty side to us.” According to a news report, he referred to sexual assaults on women in Cologne, Germany on New Year’s Eve by men of Arab or North African appearance as justification for his online comments, in which he also wrote, “If anything happens to any young girl I will personally spit in the face of councilors who pushed and pushed to get them housed here…” He also wrote, “There’s defo an Islamic invasion. Defo something going down. Just witnessed 15 Syrians in the local boozer… I opposed their arrival from the start.”

“I hope that the arrest of this individual sends a clear message that Police Scotland will not tolerate any form of activity which could incite hatred and provoke offensive comments on social media.”

In Germany, a married couple, Peter and Melanie M., were prosecuted in a criminal trial for creating a Facebook group that criticized the government’s migration policy. According to news reports, the page stated, “The war and economic refugees are flooding our country. They bring terror, fear, sorrow. They rape our women and put our children at risk. Make this end!”

At the trial, Peter M. defended his remarks online and said, “One cannot even express a critical opinion of refugees without getting labelled as a Nazi. I wanted to create a discussion forum where you can speak your mind about refugees…” He said that in his role as an administrator of the group, he removed pro-Nazi or radical remarks, but since Facebook had deleted the page, he could not present the evidence to the court.

In his verdict, the judge said, “The description of the group is a series of generalizations with a clear right-wing background.” Peter M. was sentenced to a nine-month suspended prison sentence and his wife to a fine of €1,200 with the judge adding, “I hope you understand the seriousness of the situation. If you sit in front of me again, you will end up in jail.”

In Germany, being critical of migrants and the government’s migrant policies can have other draconian consequences. In September 2015, Die Welt reported that people who air “xenophobic” views on social media, risk losing the right to see their own children. There need not even be a criminal offense for a court to consider the child’s welfare to be endangered and to restrict the parents’ right to see his or her child or to order “an educator” present during a meeting between parent and child, who can “intervene as required.” It is also possible to forbid certain actions, expressions or meetings in the presence of the child. As a last resort, the court can take the child out of the parent’s care entirely.

According to Eva Becker, Chairwoman of the Working Group on Family Law in the German Bar Association (DAV), “The decisive factor is a healthy understanding of people.” Becker estimates that it would not be enough to consider the child’s welfare endangered, if a parent said that he would rather not have any Syrian migrants living in his neighborhood. On the other hand, if a father or a mother makes comments that contain verbal threats against refugees in the presence of the child, he or she would “clearly exceed the critical limit.”

It is not even relevant whether those comments are criminal according to German law. Even a comment that is not punishable under German law can push a parent over the “critical limit.” It is not crucial whether the act is criminal, but whether it “influences” the child in a way that endangers its welfare. If a court establishes that the child’s welfare is at risk, the parent may have his or her rights of access to the child initially limited.

Actions, rather than talk, are considered even more incriminating. According to Becker, it is one thing to talk disparagingly with acquaintances about asylum seekers in the presence of the child, but much worse to take the child to “xenophobic” demonstrations.

Becker never defines what is meant by “xenophobic.” It seems implied that the talk is of one-way xenophobia, not Islamic xenophobia against non-Muslims, for example, but no attempt is made at a definition, although this is clearly the most crucial part of the matter.

While ordinary European citizens risk arrest and prosecution for “xenophobic” remarks, it is an entirely different matter for those at the top echelons of the European Union.

In a speech in Hamburg in October, Germany’s EU Commissioner for digital economy, Günther Oettinger, called a visiting Chinese delegation of ministers “slant eyes” (“Schlitzaugen“), an expression that is generally considered racist. Oettinger did not even bother to apologize, but told Die Welt that it was important to see his comments in a “larger context.”

The European Commission also refused to apologize for, or investigate, Oettinger’s remarks (which were apparently also disparaging of women and homosexuals). Commission Chief Spokesman Margaritis Schinas told incredulous reporters that, “We have nothing to add.” Asked if there would be an investigation into the remarks, he said, “We do not have an FBI at the Commission.”

As recent as October 28, European Commission President Jean-Claude Juncker promoted Oettinger to the highly coveted and powerful position of vice-president with responsibility for the EU budget.

Clearly, the law is not equal. EU Commissioners can make “xenophobic” remarks and get a promotion; European citizens, for exercising their right to free speech, are arrested and prosecuted.


European Union Orders British Press NOT to Report when Terrorists are Muslims As IS loses power, will group tap women jihadis to fight?