As IS loses power, will group tap women jihadis to fight? 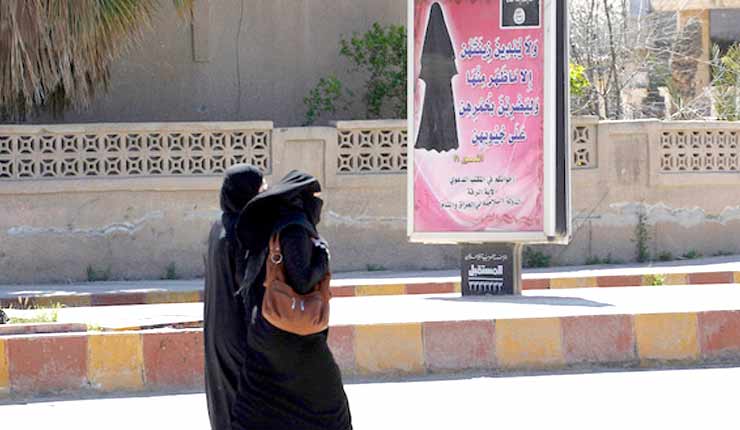 The glory days of the so-called caliphate are over. For the past two years, the Islamic State (IS) has suffered severe losses on the battlefield, and it seems only a matter of time before its largest stronghold, Mosul, will also fall. The operation to liberate Raqqa, IS’ de facto capital, was announced on Nov. 6. While the caliphate is shrinking and IS loses ever more manpower, a question arises: Will the traditional roles of female jihadis change?

The men who typically joined terrorist organizations like al-Qaeda and went to Pakistan, Chechnya or Afghanistan for jihad usually did so alone. But because Syria was relatively easy to reach via Turkey and IS repeatedly stated that everyone who shared the group’s ideology was welcome in its “state,” girls and women from all over the world also joined the terrorist organization, including at least 600 from the West. Many foreign women traveled to Syria to marry jihadi fighters on the spot, while others came with their entire families.

The terror group not only lured tens of thousands of foreign jihadis from all over the world to join its ranks in Syria and Iraq, it also changed the dynamics of jihadism by making it a family affair. Al-Khansaa Brigade, an all-female police unit tasked with enforcing IS’ strict laws for women, highlighted this ultra-religious family ideal in its manifesto: Women’s role is to be housewives and to take care of their husbands and children. By doing so, they contribute to IS’ goal of building a state governed by a strict interpretation of Sharia. They may work — as doctors or teachers, for example — but only when necessary.

In February 2016, The Times reported that IS had employed female fighters and suicide bombers in Libya. Several female operatives had been killed in one week fighting alongside the men. One of them tried to blow herself up in the attacks, which marked the jihadi group’s first recorded use of female militants. In France, police disrupted an all-female terrorist cell in Paris in early September. The women had either sworn alliance to IS or had connections with IS fighters.

But what about female IS jihadis in Iraq and Syria? Until now, women have been largely confined to noncombat roles, although some received weapons training when they joined the group, according to the Dutch secret service. The idea was reportedly that women should be able to defend themselves when their husbands are absent.

However, in addition to al-Khansaa Brigade, the terror group recently opened camps where women receive expanded military training and form all-female battalions, according to Syrian media activists from Sound and Picture, an organization that documents the violations of extremists and the Syrian regime.

“Tim Ramadan,” a media activist from Sound and Picture who works under a pseudonym for his own protection, told Al-Monitor, “About 11 months ago, two new camps opened in Raqqa and its countryside for women only. IS women here learn how to fight and to use weapons. These camps are different from the standard training they received in the beginning.”

Ramadan said he is currently in IS-controlled areas inside Syria, where he is able to talk to local Syrian women. He said, “Women who joined IS are now trying to recruit the locals. I heard from Syrian women that the group offers them money in exchange to support their families. When the women ask what IS expects from them, they say they should obey if IS decides they will involve women in the future — for example, in suicide attacks, or maybe when they have to defend Raqqa.”

Although al-Khansaa Brigade points out in its manifesto that the primary function of women is to take care of their families, there are secondary functions that make it permissible for certain women to leave the house to serve society. Jihad is one of them.

“Women may go out to serve the community in a number of situations, the most important being … jihad [by appointment] — if the enemy is attacking her country and the men are not enough to protect it and the imams give a fatwa for it, as the blessed women of Iraq and Chechnya did, with great sadness, if the men are absent [or] even [if] they are present,” wrote the brigade’s media wing.

In the past, female extremists’ roles within Islamic militant groups occasionally changed from passive to active according to the circumstances. The Chechen “Black Widows” carried out many suicide attacks after their husbands, fathers or brothers were killed in the war with Russia. They were also involved in the hostage crisis in the Dubrovka Theater in Moscow and in the massacre at an elementary school in Beslan, where hundreds of hostages were killed.

A study published by the Institute for Strategic Dialogue in January 2015 found that the deaths of male IS jihadis may create a new generation of female suicide bombers. This is what happened with the Black Widows, who also primarily played a domestic and supportive role in a patriarchal society. This situation changed with the loss of a large proportion of the male population, and Chechen women took on a more central and public role that included combat. They became suicide bombers both inside Chechnya and throughout Russia.

Even though it goes against al-Qaeda’s religious restrictions to involve women in fighting, women carried out dozens of suicide attacks between 2003 and 2009 in Iraq. One of them was committed by a foreigner, the Belgian jihadi Muriel Degauque, who blew herself up in 2005 in Baghdad.

Western female IS jihadis used to post pictures of Kalashnikovs, pistols and explosive belts on social media, sometimes expressing their desire to use them, in addition to daily updates about their lives. But about a year ago, most of the social media accounts run by these women were deleted or became inactive as IS shut off private internet access, forcing residents and fighters to use public internet cafes, where they can be monitored. Since then, the flow of information about how IS women spend their days has dried up.

Abu Ibrahim Raqqawi, a media activist from the group Raqqa Is Being Slaughtered Silently, doesn’t think IS will allow women on the front lines or into battles because the group doesn’t even allow women to travel to areas not under their control. However, he does think suicide attacks by women could be expected in the future.

“I know they train them on how to use weapons to defend themselves. It could be the same with suicide attacks carried out by women. With IS, you never know what is going to happen. If they want to do something new, they will look for some Quran or hadith verse to legitimize it. That is how IS works,” he told Al-Monitor.

It is to be expected that IS will increasingly use women in fighting or attacks — not because they would like to do so, but rather because they might be forced to by their circumstances.