The Secret War of Agence France Presse against Israel 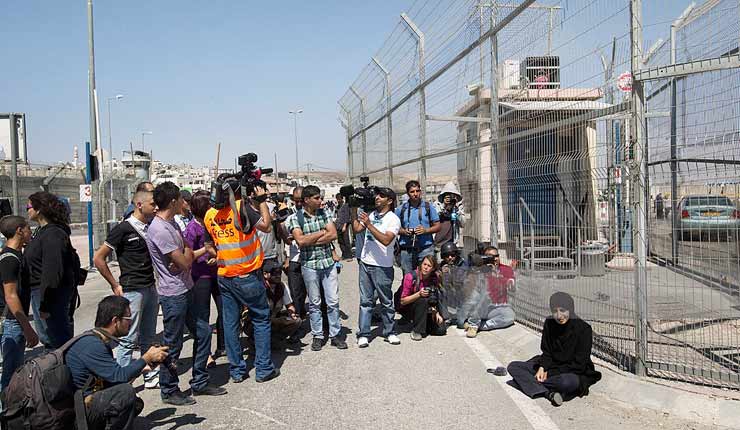 On July 15, 2016, after the truck ramming that killed 84 people in Nice, France, Agence France Presse (AFP) released a report entitled, “When Vehicles Become Weapons”. It is the duty of a large news agency such as AFP to list, for its customers, examples of countries that are suffering from vehicular terrorism.

Concerning Israel, we can read in the third paragraph: “In Israel and the Palestinian territories, car-ramming attacks have featured heavily in a wave of violence that has killed at least 215 Palestinians, 34 Israelis, two Americans, an Eritrean and a Sudanese since October last year”.

A naïve reader might understand that in Israel and Palestinian territories, Jews and Muslims — or Israelis and Palestinians — find it amusing to use their vehicles to kill innocent passersby. He might think also that Jews are far better players of this gamer than are Muslims, because they killed “215 Palestinians” against only “34 Israelis.”

Biased information about Israel in the French press is not an episodic occurrence. It is a systematic one. The main engine of this biased information industry is blatantly the Agence France Presse.

AFP — like Reuters, Associated Press or Bloomberg — is a news agency with offices all over the world (150 countries and 200 bureaus). But it is not a private company; it is supposed to be a cooperative owned by customers (newspapers, radios and TV channels), but it is actually a state-owned company, heavily subsidized due to the large number of subscriptions from different French government ministries — especially the Ministry of Foreign Affairs. The managing director of AFP is appointed by the government. AFP is a tool of French diplomacy and is considered an arm of France’s cultural international influence.

AFP has a large “bureau” in Jerusalem and its journalists have an enormous influence on the European and Middle Eastern press. This influence is enormous because its reports are literally copied-and-pasted by newspapers and countless websites in France and Europe.

The terrorist attack on June 8, 2016 at the Sarona Market in Tel Aviv is a good example of the systematically biased headlines sent by AFP to its customers.

Three types of biased headlines can be documented.

The “pro-Palestinian” bias is so glaring that many people in France call now AFP, “Agence France Palestine.”

It is so thoroughly a “pro-Palestinian news agency” that this French institution does not see anything unethical about hiring Palestinian activists as reporters. According to the Committee for Accuracy in Middle East Reporting in America (CAMERA):

“Nasser Abu Baker, the chairman of the Palestinian Journalists’ Syndicate, the leading force for the boycott of Israeli journalists and media, also writes for the influential French news agency… for more than a decade, Abu Baker has also worked as a reporter for AFP covering Israeli-Palestinian affairs. Two Israeli journalists who cover the Palestinians confirmed to CAMERA that Abu Baker continues to work for the news agency. One of those reporters checked his information with three Palestinian journalists, who also confirmed that Abu Baker still reports for AFP while he serves as a senior official at the PJS. Abu Baker’s Facebook account also indicates that he works for AFP”.

What is the goal of this obsessive repetition? It is probably to ensure the reader never forgets that Israel has no legitimacy in the West Bank and that any Palestinian killer is not an Islamic extremist but a freedom fighter busy “liberating” supposedly “occupied” territory. But since the Palestine Liberation Organization (PLO) was founded in 1964, and the “occupied territories” came under Israel’s control only in 1967, what was the PLO “liberating”? To the AFP, the murderer is the real victim, and the Jews murdered in Tel Aviv are only meant to be seen as dead symbols of an “occupation.”

In every wave of violence, AFP reports usually mention, at the end of almost each news item about Israel, that “Israel, Jerusalem and the Palestinians territories are embroiled in internal violence, in which 207 Palestinians, 32 Israelis, 2 Americans, 1 Eritrean and 1 Sudanese have been killed since October 1st, according to a counting made by AFP.”

AFP appears to be trying to lure you into nurturing the suspicion that many of the Palestinians were shot in cold blood.

You will notice also the phrase “Israel, Jerusalem and the Palestinians territories,” a distinction repeated day after day to remind people that Israel’s international legitimacy and claim to the holy city of Jerusalem might be under dispute.

Palestinians are not Islamists like other Islamists. News from AFP never mentions that the Palestinian murderers shout “Allahu Akbar” [“Allah is the Greatest”] while they are stabbing, shooting, and ramming into Israelis. They never say that the terrorists who survived, explained that they wanted to become “shahids” [martyrs] in order to have 72 virgins who await them in gardens of Allah. This simple truth would destroy the system of lies built by the AFP, which portrays Palestinians not as Islamists like other terrorists, but as “activists” fighting for the “liberation” of their country.

A Denial of Palestinian Islamist Terrorism. AFP keeps systematically refusing to call an Islamic terrorist a “terrorist,” especially if this terrorist is a Palestinian. All of them are “activists,” “militants” or “attackers.” In AFP news, the word terrorist appears only within quotation marks when the police or government officials speak about a “terrorist.” The AFP says this is the proof that the agency refuses any value judgement. For AFP, the words “terrorism” and “terrorist” would imply a moral judgement (it is bad) and not a designation for a type of political fight. This rule, however, is applied systematically only to Israel. In the item entitled, “When Vehicles Become Weapons,” mentioned above, the first sentence is: “Transforming a vehicle into a simple but deadly weapon of terror…,” showing that for the truck-ramming in France, the word “terror” is not emphatic or connected to a moral judgment.

In 2015, the Conseil Représentatif des Institutions Juives de France (CRIF), a federation of around sixty Jewish organizations in France, ordered a group of professional journalists to look into how the AFP produces its news on Israel. The report, called “The AFP Faces Palestinian Propaganda: October-November 2014,” has — not out of shyness — never been published; instead it was sent to the managing director of AFP.

What do we find in this report? A survey of many value judgements!

In conclusion, one might ask: Why criticize only the AFP? The same bias appears in the media and news agencies all over the developed world, including Reuters, the BBC and the AP. But this situation leads to another, more frightening question: Why, when it comes to Israel, is such a misinterpretation of reality so generalized in the press? The only answer is that a war is in progress: a war of delegitimization. Historians have shown that each time a group is targeted as “bad” — sub-human because of its religion, ethnicity, country or skin-color — the desire for genocide is not far behind.

Yves Mamou, based in France, worked for two decades as a journalist for Le Monde.

[1] “Under international humanitarian law and the Rome Statute, the death of civilians during an armed conflict, no matter how grave and regrettable does not constitute a war crime…. even when it is known that some civilian deaths or injuries will occur. A crime occurs if there is an intentional attack directed against civilians (principle of distinction) or an attack is launched on a military objective in the knowledge that the incidental civilian injuries would be clearly excessive in relation to the anticipated military advantage (principle of proportionality).” — Luis Moreno-Ocampo, Chief Prosecutor, International Criminal Court.