Did a CAIR Official Call for the Overthrow of the US Government? 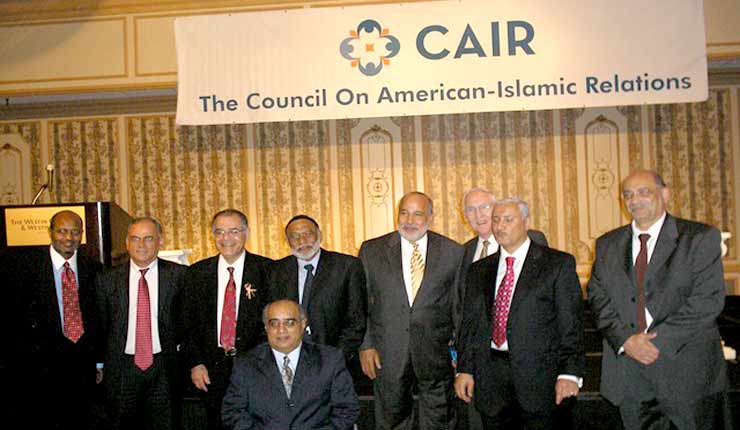 The Council on American-Islamic Relations (CAIR) successfully presents itself to the media as a benign civil rights organization, comparable to the NAACP or the ADL — a description that conservatives ineffectively rail against.

In this light, perhaps a tweet sent out just after midnight EST on November 9 by Hussam Ayloush, the long-time head of CAIR’s Los Angeles office, will help awaken the press to CAIR’s true Islamist identity. Ayloush wrote:

That second line is Arabic (“الشعب يريد إسقاط النظام‎‎”) means, “The people wants to bring down the regime.”

In other words, Ayloush called for the overthrow of the US government.

Ayloush may be the most vicious of the CAIR leaders. So far as I know, for example, he’s the only one of them to bandy about the term “Zionazi,” as evidenced in his e-mail below, dated March 18, 2002:

Ayloush is not a marginal figure, but someone with access to the heights of American power, including the White House. According to an Investigative Project on Terrorism analysis in 2012, he

was a delegate to the 2012 Democratic National Convention in Charlotte, N.C. [and] … attended at least two White House meetings. The logs show Ayloush met with Paul Monteiro, associate director of the White House Office of Public Engagement on July 8, 2011, and Amanda Brown, assistant to the White House director of political affairs Patrick Gaspard, on June 6, 2009. According to reliable sources, Monteiro was White House liaison for secret contacts with CAIR, especially with Ayloush.

The dawning of Donald Trump’s victory was apparently a trying moment for Ayloush, so he let loose with an emotion he’d normally have kept under wraps. In other words, he offered a rare, candid insight into the mind of a CAIR apparatchik.

Whoever knowingly or willfully advocates, abets, advises, or teaches the duty, necessity, desirability, or propriety of overthrowing or destroying the government of the United States … Shall be fined under this title or imprisoned not more than twenty years, or both.

So, journalists, editors and producers: do please note what CAIR stands for.

One thought on “Did a CAIR Official Call for the Overthrow of the US Government?”