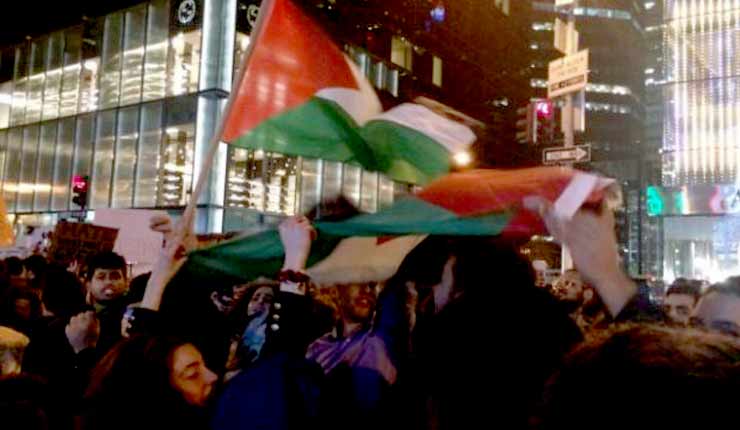 Anti-Israel activists are seeking to co-opt the left-wing protests that have erupted across the US following Donald Trump’s victory over Hillary Clinton in last Tuesday’s presidential election to further their cause, a prominent conservative US legal expert said on Monday.

“None of this is solidarity,” Cornell Law School Professor William A. Jacobson wrote on his Legal Insurrection blog. “It’s conquest of other peoples and movements to redirect them to and focus attention on the BDS anti-Israel agenda.”

As highlighted by Jacobson, the New York City branch of Students for Justice in Palestine (NYC-SJP) has been calling on its members to join the anti-Trump demonstrations.

In video uploaded to Facebook by NYC-SJP , protesters can be heard chanting, “There is only one solution…intifada revolution,” and “Trump, Obama, you will feel the intifada.”

“Intifada” is an Arabic word meaning “tremor” that is most commonly associated around the world with two violent Palestinian uprisings against Israel.

“How will this end?” Jacobson asked in his blog post. “The way it usually ends in these hijackings — anti-Israel activists damage the movement they supposedly support.”

On Sunday, Fox News contributor Pete Hegseth asserted that the Trump protests were being driven by George Soros-funded groups that want “perpetual anarchy.”

“These are Communists, these are anarchists, they’re antisemitic,” Hegseth said on Fox and Friends. “They’re not pro-American liberals who are frustrated with conservatism. They’re anti-American and they want to foment chaos across our country.”

Trump himself has tweeted twice about the demonstrations. In the first tweet— published on Thursday night — he said, “Just had a very open and successful presidential election. Now professional protesters, incited by the media, are protesting. Very unfair!”

Just a few hours later, the president-elect adopted a more conciliatory tone, tweeting, “Love the fact that small groups of protesters last night have passion for our great country. We will all come together and be proud!”

Watch the video below of anti-Israel marchers at a Trump protest in Manhattan last week (published by pro-Israel blog Israellycool on YouTube):