What can be done about Europe’s listless pursuit of Hezbollah terrorists? 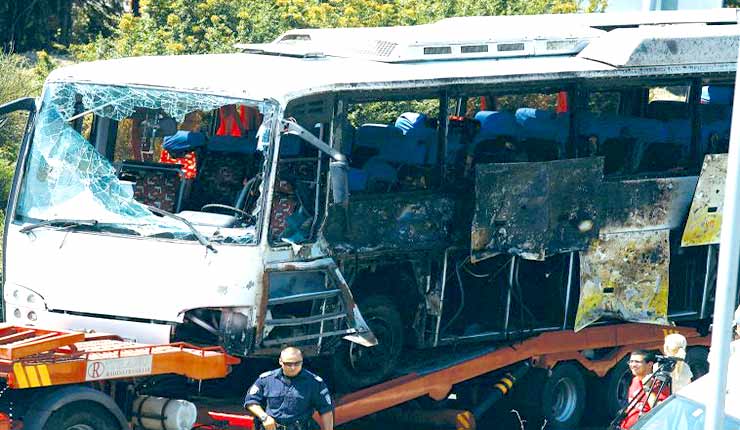 After murdering five Israelis and their Bulgarian bus driver in 2012, two Hezbollah operatives who were put on trial in absentia on Thursday at a Sofia court remain secure in Lebanon. The lethargy surrounding the efforts to capture the two mirrors the glacial-like pace of the trial.

Procedural difficulties in serving legal notification to all of the Israeli victims, including 32 wounded in the terrorist attack in Burgas, caused a second postponement until December 12.

“Iran and Hezbollah were behind the Burgas bombing, just as they were responsible for the atrocities in Argentina. But in Europe, the fear of confronting both are daunting, as they have been for many years,” Prof. Gerald Steinberg, founder and president of NGO Monitor and lecturer in political science at Bar-Ilan University, told The Jerusalem Post on Sunday.

The former head of Bulgaria’s counter-terrorism unit and the US government believe both suspects – Lebanese-Canadian Hassan el-Hajj Hassan and Lebanese-Australian Meliad Farah – are in Lebanon. In a sign of waning enthusiasm, there has been no significant action to compel the Lebanese government to extradite the Hezbollah operatives.

Bulgaria asked the Lebanese to cooperate in 2013, but was swiftly rebuffed. Bulgarian officials have been tight-lipped about their plan to arrest the men.

Bulgaria has not publicly summoned the Iranian and Lebanese ambassadors to demand that their countries aggressively pursue the capture of the terrorists. Bulgaria has not replicated diplomatic action like that of the Netherlands in 2011, following the execution of Zahra Bahrami, a dual Iranian-Dutch national.

She was most likely executed for her participation in the pro-democracy Green movement in 2009 against Iran’s clerical regime.

As a result of the execution, the Netherlands suspended diplomatic relations with the Islamic Republic of Iran. The Netherlands labels Hezbollah’s entire organization as a terrorist militia.

Why hasn’t Bulgaria cut diplomatic relations with Lebanon over the harboring of suspects who murdered Mustafa Kyosev, a 36-year-old Bulgarian Muslim whose widow and daughter are struggling to survive.

In sharp contrast to the vigorous pursuit of jihadists who executed scores of people in Paris and Bremen, political inertia, wittingly or unwittingly, has taken over Europe’s desire to capture the Hezbollah operatives believed to be responsible for Burgas.

Solomon Bali, who serves as a mentor for the B’nai B’rith lodge in Sofia, told the Post, “Unfortunately, when it comes to terrorist acts in poor countries, these attacks are easily forgotten.

The international attention to them is limited. The case in Burgas had a very important impact on the international treatment of Hezbollah.” He cited the EU’s decision to designate Hezbollah’s military wing as a terrorist organization in 2013.

“They [Bulgaria and EU authorities] should do more, but I am skeptical of their willingness and their capacity to do so,” said Bali, adding they can “use the decision [2013 EU terrorist listing] as a reason to act. If someone wants to make the life of terrorists difficult, they can.”

Bali said the distinction of Hezbollah into political and military wings is bogus. Steinberg, on a similar note, said, “Instead of isolating Hezbollah, the EU maintains the fiction of a ‘military wing,’ which is classified as a terrorist organization, and a separate ‘political wing,’ which continues to raise funds and build terrorist infrastructure. This is absurd.

“And regarding the Iranian regime, European hopes for lucrative business contracts take precedence over the ‘moral principles’ that ostensibly guide foreign policy. Until these fictions are confronted, the victims of terrorism and their families, including from the Burgas attack, will not see justice done,” added Steinberg.

The US Senate and Congress have passed resolutions this year calling on Europe to outlaw all of Hezbollah. In a March speech at AIPA C’s policy conference, Democratic candidate for president Hillary Clinton said, “And we must work closely with Israel and other partners to cut off the flow of money and arms from Iran to Hezbollah. If the Arab League can designate all of Hezbollah as a terrorist organization, surely it is time for our friends in Europe and the rest of the international community to do so as well and to do that now.”

US President-elect Donald Trump recognized the role of the troika of Islamic terrorism: Hezbollah, Hamas, and Iran. In an early November statement from Jason Dov Greenblatt and David Friedman, co-chairmen of the Israel Advisory Committee to Donald J. Trump, wrote: “Despite the Iran nuclear deal in 2015, the US State Department recently designated Iran, yet again, as the leading state sponsor of terrorism, putting the Middle East particularly, but the whole world at risk by financing, arming, and training terrorist groups operating around the world, including Hamas, Hezbollah.”

To judge by the 2013 classification of Hezbollah’s military wing as a terrorist entity – and the role of the US government in twisting the EU’s arm – the Trump administration will be the decisive factor in pushing the EU to outlaw all of the Iranian-backed Shi’ite Lebanese militia within its territory.