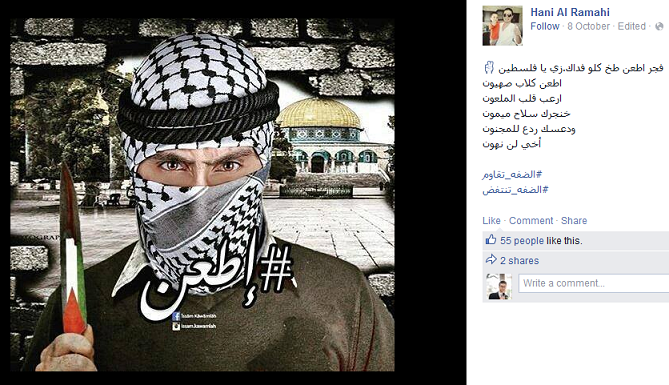 UPDATE, Oct. 19: Despite all of the links and screenshots below, the UN spokesman said Friday that it “remains to be seen” if UNRWA officials are engaged in incitement.]

GENEVA, October 16, 2015 – At least ten different UN staffers are using the imprimatur of their official positions to incite Palestinian stabbing and shooting attacks against Israeli Jews, with one calling on Facebook to “stab Zionist dogs,” according to a new report issued today by UN Watch, the Geneva-based non-governmental organization that is accredited by the United Nations with the mandate to monitor the world body’s compliance with its charter.

“The UN and top funders of UNRWA such as the United States government must act immediately to terminate employees who are inciting murderous anti-Semitism and fueling the deadly pandemic of Palestinian attacks against Israeli Jews that have claimed innocent men, women and children, aged 13 to 78,” said Hillel Neuer, executive director of UN Watch.

“Despite UNRWA’s promise, in the wake of our previous report, to take action and dismiss UNRWA perpetrators of incitement, there has been no accountability whatsoever,” said Neuer. “On the contrary, UNRWA’s main response has been to try and intimidate UN Watch.”

“We call once again on Ban Ki-moon and UNRWA to immediately terminate their employees who incite to murder. Moreover, we call for the establishment of an independent commission of inquiry, to include representatives of the U.S., the EU (gave $139 million), the UK ($95 million), and other top UNRWA funders, to investigate the culture of impunity for perpetrators of racism and incitement that pervades UNRWA.”

“UNRWA’s strategy of impunity, denial and deflection only enables more incitement and violence. It’s time to put an end to the pattern and practice of UNRWA school principals, teachers and staff members posting antisemitic and terror-inciting images, indicating a pathology of racism and violence within UNRWA that must be rooted out — and not buried, as UNRWA spokesman Chris Gunness has attempted to do by calling for boycotts of newspapers or NGOs that dare to report these incidents of hate,” said Neuer.

“We’re urging the UN to finally recognize that these despicable posts, published on Facebook accounts run by people who openly identify themselves as UNRWA officials, constitute a gross violation of the International Covenant on Civil and Political Rights, which prohibits incitement to discrimination, hostility or violence,” said Neuer.

Report on UNRWA Teachers and Other Officials Inciting Violence & Antisemitism Hani Al Ramahi, who identifies himself on Facebook as a “Projects Support Assistant at UNRWA” (screenshot below), posted the violent image below on October 8th, in which a keffiyeh-clad man stares down the camera as he grasps a knife, bearing the Palestinian colors, daubed in blood. “Stab Zionist dogs,“ reads the caption. Recommendation: UNRWA should fire Hani Al Ramahi for using the name of UNRWA on an account that incites violence and terrorism. Ibrahim Ali, who lives in Hebron and identifies himself as an UNRWA employee on his Facebook page (screenshot here), posted this video on his timeline on October 6th (screen captures below), which glorifies a gruesome series of terrorist attacks, including shootings and stabbings, of Israeli Jews. Recommendation: UNRWA should fire Ibrahim Ali for using the name of UNRWA on an account that promotes violence and terrorism.


Israeli President Rivlin in 6 day visit: India is an important ally What can be done about Europe’s listless pursuit of Hezbollah terrorists?