PA threatens to make US ‘miserable’ if embassy moved to Jerusalem 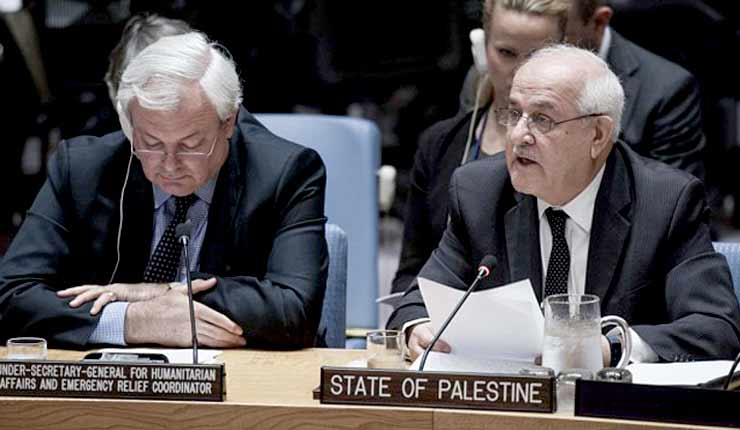 The Palestinian envoy to the United Nations threatened to exact revenge on the US at the world body should President-elect Donald Trump make good on his promise to move the American embassy from Tel Aviv to Jerusalem.

Boasting that the Palestinians have a variety of tools at their disposal at the UN against the United States, Riyad Mansour said he could make the life of US diplomats “miserable” in retaliation for the move.

“If they try to attack us by moving the embassy to Jerusalem, which is a violation of Security Council resolutions and a violation of Resolution 181… it means they are showing belligerency against us,” Mansour said at an event sponsored by the Jerusalem Fund Foundation in the US capital Friday.

“Maybe I cannot have resolutions in the Security Council” — likely due to a US veto — “but I can make their lives miserable every day by precipitating a veto on my admission as a member state,” he said.

“Nobody should blame us for unleashing all of the weapons that we have in the UN to defend ourselves, and we have a lot of weapons in the UN,” Mansour added. Israelis waiting for US visas line up at the US Embassy in Tel Aviv. (photo credit: AP/Eitan Hess-Ashkenazi/File)

While on the campaign trail, Trump and his surrogates said Jerusalem was Israel’s undivided capital and vowed to move the embassy there from Tel Aviv — a promise made by many US presidential candidates but never made good on.

Since winning the election, the president-elect has begun to signal a possible walking back of his stances on Israel.

On Thursday, a Trump adviser said he would only move the embassy “under consensus,” and the next day Trump himself told the Wall Street Journal he would prioritize solving the Israeli Palestinian conflict, defying predictions that he would take a more hands-off approach than the current administration.

Mansour also cast doubt on whether Trump would follow through with the measure, noting that other US presidential candidates had in the past promised to move the US embassy to Jerusalem but did not follow through.

“What you do when you are campaigning is one thing, but when you have to deal with the legal thing it is something else,” he said.

Congress passed a law in 1995 mandating the move of the embassy to Jerusalem, but allowed the president a waiver. Each president since then has routinely exercised the waiver, citing the national security interests of the United States, despite repeated campaign promises.

Referring to measures against Israel in the UN that the Palestinians have reportedly held back at US President Barack Obama’s urging in order to keep a negotiated solution viable, Mansour indicated Ramallah would take a more hard-line approach.

“You show belligerency against me, then I will do all the things that I can. I can have emergency meetings in the Security Council, I can reopen the whole Pandora’s box of the ruling of the International Court of Justice over the wall,” he said, referring to Israel’s security barrier.

Mansour argued that he was working via legal means while the next US administration would be breaking international law by acting against a number of UN Security Council resolutions that declared Israel’s annexation of the East Jerusalem illegal.

In November, Trump told Netanyahu that if elected, “a Trump administration would finally accept the longstanding Congressional mandate to recognize Jerusalem as the undivided capital of the State of Israel.”

During the campaign, Trump called Jerusalem “the eternal capital” of Israel and said he was “100 percent for” moving the embassy there.

A number of Israeli politicians, including Jerusalem Mayor Nir Barkat, have seized on Trump’s victory by asking him to fulfill his pledges, which would break with longstanding US policy of awaiting a final status agreement on the city.

However, Walid Phares, one of Trump’s top foreign policy advisers, signaled on Thursday that Trump might not move the US Embassy to Jerusalem immediately.

Phares told the BBC that while Trump was committed to moving the US Embassy from Tel Aviv to Jerusalem, as other presidential candidates have vowed, he would not do so unilaterally.

“Many presidents of the United States have committed to do that, and he said as well that he will do that, but he will do it under consensus,” Phares said.

Phares did not elaborate on what consensus would be sought for such a move, which would break with decades of precedent and put Washington at odds with nearly all United Nations member states.