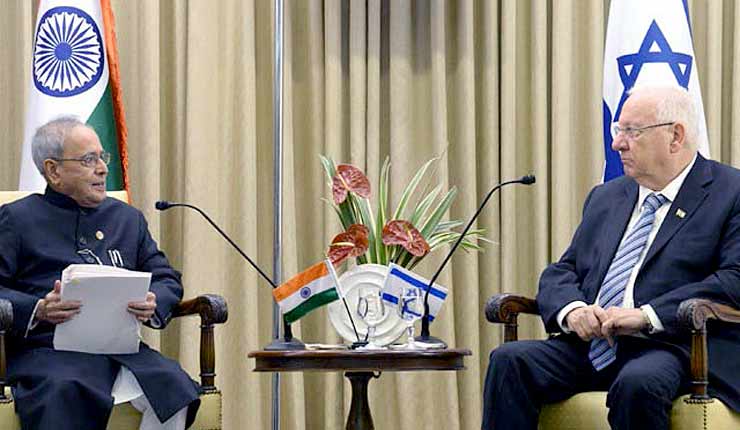 President Rivlin departs on a state visit to the Republic of India, where he will open an agro-tech conference with his local counterpart

President Reuven Rivlin and First Lady Nechama Rivlin on Sunday evening departed on a state visit to the Republic of India, at the invitation of Indian President Pranab Mukherjee.

During the visit, Rivlin will join Mukherjee in opening an agro-tech conference in the city of Chandigarh, hold meetings with Indian Prime Minister Narendra Modi, External Affairs Minister Sushma Swaraj, and visit several sites of cooperation and joint projects between the two countries.

He will also pay his respects at the sites of the 2008 Mumbai terror attacks, and lay wreaths on the tomb of Mahatma Gandhi, and at the memorial for Indian soldiers who fell in the First World War in combat in the land of Israel and the Middle East.

Rivlin will also hold meetings with senior Indian officials, and with leaders of the Jewish community.

Since coming to power in 2014, Modi has been a leading force in boosting India’s diplomatic relations with the Jewish state.

Security cooperation between the two countries has greatly increased, with India even turning to Israel for help on building a security fence – similar to one Israel erected on its border with Egypt.

During a visit to Jerusalem earlier this year, India’s foreign minister said the country intended to further strengthen its ties with Israel, stressing the relationship is of “utmost importance to the Indian people.”

Before departing on Sunday evening, Rivlin said, “I am departing now on an important visit to India, an important ally and close friend of Israel, a state with whom we have much in common.”

“Israel and India are both countries of innovation and of inspiration. Countries that have ancient traditions, but have built strong and thriving hi-tech economies, and now celebrate 25 years of diplomatic relations. I will be accompanied on this visit by a large delegation of business and academic leaders and together we will promote our bilateral cooperation. This visit is a sign of the strong relations and friendship between our peoples, and I hope will plant the seeds for that friendship to grow closer and closer,” he added.

Accompanying the delegation, Yaffa Zilbershats, head the Council for Higher Education’s budget committee, said, “The issue of international cooperation in higher education and the expansion of academic ties between Israel and the world – in particular with India – is one of the central aims of the multi-year plan for higher education in Israel.”

Heading the business delegation is Shraga Brosh, President of Manufacturers Association of Israel, who noted, “India represents a great challenge for Israeli manufacturers and this delegation will afford the opportunity to strengthen cooperation and partnership with their Indian counterparts. I have no doubt that this will be a fruitful visit and forge long-lasting economic partnerships which will strengthen and help grow the bilateral trade between the countries.”

One thought on “Israeli President Rivlin in 6 day visit: India is an important ally”