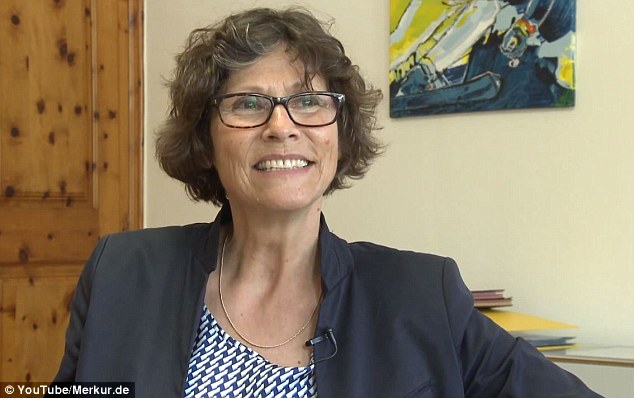 Dr Sigrid Meierhofer (pictured) has written about the ‘massive problems’ caused by refugees in a letter begging for help from Bavarian politician Maria Els, which was leaked to the press

The mayor, from the centre-left SPD party, says she will need to take action ‘to secure public safety and order’ after a series of public clashes with police.

The Abrams centre, a former US Army site that now houses around 250 asylum seekers, is also affecting tourism and the health of residents, she claims.

‘There has been an increasingly worsening situation in recent weeks around the registration centre Abrams,’ wrote the mayor, in what was seen as a cry for help.

In the previous year it was mostly occupied by Syrian families but now, around 150 of the residents are Africans, 80 per cent of them unaccompanied young men.

Mayor Meierhofer makes it plain that the current occupiers of the building have become ‘problematic’ and said she is increasingly concerned about ‘public order’.

Curfews on migrants entering certain areas, like the spa park in town, have been implemented in the past few weeks.

Police officers have responded to more incidents in the past six weeks in and around the centre than in the past 12 months put together.

Deputy police chief Thomas Holzer recently said: ‘The blacks are in charge,’ as he described the constant clashes with asylum seekers at the centre.

He went on: ‘There are brawls, fights and property damage. The blacks occupy the best wi-fi places, choose who sleeps in what room.

‘The situtation is a problem for us and causes some concern. In September, we recorded a quarter of our annual operations.’

Repeat offenders at the centre have been moved to some of the other 11 facilities in the area, but the problems persist.

Local social media speaks gravely of sexual assaults of the worst kind taking place in the accommodation centre, but Holzer said he cannot confirm this.

Frau Meierhofer explained in her letter that the complaints from locals were accumulating and that they were not from the far-right or other extremist groups.

She writes: ‘They are expressing their trials and tribulations to us. Massive problems with refugees in Garmisch-Partenkirchen,’ according to the local Merkur newspaper.

A local official was outraged that the letter, and the deputy police chief, identified black Africans for causing the trouble, saying ‘stereotyping’ was unacceptable.

But the mayor’s office insisted she was telling it like it is, not as bureaucrats elsewhere would like it to be.

More than a million refugees and migrants came to Germany in 2015 alone, sparking a heated debate that has seen Chancellor Angela Merkel come under immense pressure.


When the Trump Team Comes Looking for the Secrets of Obama's Iran File Geert Wilders: The witch hunt against a freedom fighter continues