Muslim-Zionist Activist: ‘Antisemitism Is the Norm in the Islamic Community, But the World Will Come to Realize Its Mistake About Israel’ 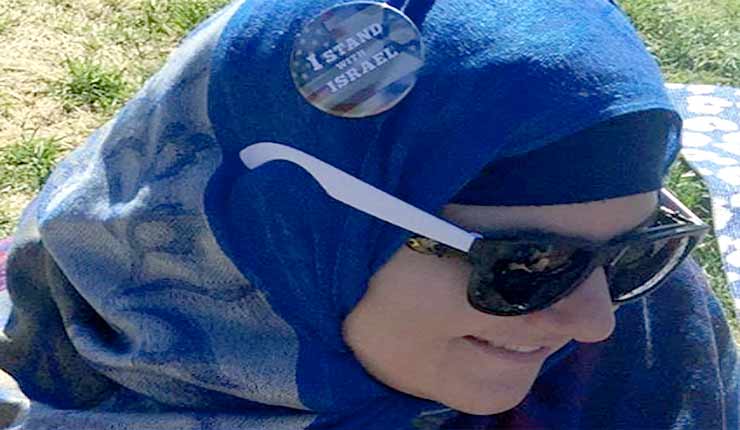 Antisemitism and Israel-hatred is the norm among Muslims, including in the United States, even though the Koran can be read as a “Zionist text,” a devout American Muslim told The Algemeiner this week, explaining how she came to work to promote interfaith dialogue and understanding and how she thinks the world will come to see the Jewish state in a different light.

Nadiya Al-Noor — a graduate of Maryland’s Goucher College studying for her master’s degree at Binghamton University in upstate New York — was explaining her evolution into a person who warmly embraces both Jews and the Jewish state. On and off campus, Al-Noor said she constantly finds hypocrisy about antisemitism and Israel, and she has made a mission of letting the world know about these incidents through social media.

Recently, Al-Noor posted a picture on Facebook of a drop-down menu on an online Binghamton emergency contact form that listed “Occupied Palestinian Territories” as a location option. She told The Algemeiner, “Israel was also included, so that was a relief, but no other location was labeled ‘occupied.’ Not Northern Cyprus, Kosovo or Crimea [all under military occupation by various countries]. Just the Palestinian territories.”

JNS.org – For two American Jews who immigrated to Israel last summer, their first Veterans Day in the Jewish state presents an…

Raised in Stony Brook, Long Island, Al-Noor had many Jewish friends, but said antisemitism was still imbued in her at an early age. In an hour-long interview, she spoke of the journey that led to her change in outlook and why she started blogging about being a Muslim Zionist.

The Algemeiner: How did you get into pro-Israel activism?

Al-Noor: When I was at Goucher, I was trying to sign up for access to the Hillel’s kosher kitchen — because that was the closest thing to halal — but I filled out the wrong form. I had actually signed up for the pro-Israel committee, and then I was too scared to tell the Israel fellow my mistake. At that point, I was still pretty anti-Israel, but I had become very interested in Judaism, so I began going to the programs. I met Israelis and IDF veterans, started reading material from sources other than anti-Israel ones — before that, I was getting my information from places like Electronic Intifadaand Al-Jazeera — and I realized how wrong I had been about it all.

The Algemeiner: What had drawn you to Judaism?

Al-Noor: One day I woke up with yearning in my chest to learn about Judaism. I just had to. It felt like a call from God.

The Algemeiner: What has it been like to be a Zionist at university?

Al-Noor: As soon as undergraduate students get on campus, they are bombarded by anti-Israel rhetoric and activists, and there is a light trained on you by such movements when you are Muslim. You are expected to join.

Goucher’s chapter of Students for Justice in Palestine (SJP) was really intense a few years ago, and then it died down. But when it was bad, it was really bad. The pro-Israel group planned a program featuring Assi Azar [an Israeli television personality and LGBT rights activist], and the SJP tried to get the school to cancel the event. The college refused, so SJP stormed the event and protested so intensely that the program had to be stopped early. After I saw how SJP treated my Jewish friends, making them scared to be openly Jewish or go to class — one of my friends got his kippah knocked off his head while he was walking on campus — I decided that I had to do something, I had to act. I started with a blog post, “Open Letter from a Muslim Woman.”

Binghamton — which is 30% Jewish and far more pro-Israel than not — once had a very active SJP, but it has since disappeared. Today, the biggest problem facing advocates of Israel is apathy from the general student population.

The Algemeiner: Would you say those instances of your friends being afraid to be visibly Jewish on campus are isolated cases?

Al-Noor: Antisemitism is a problem at universities, and it goes unrecognized because people see Jews as white. They think white people can’t be oppressed, so it follows, in their minds, that Jews cannot be persecuted. Antisemitic tropes feed this thinking: Jews are seen as wealthy and powerful, as JAPs (Jewish American Princesses) with privilege. Even though 60% of religion-based hate crimes in the US are antisemitic, no one really talks about it. They say, “But there are Hillels on campus,” or, “A Jew almost became president [Democratic primary contender Bernie Sanders],” and so they conclude that there is no antisemitism.

The Algemeiner: How do you see your role in combating this way of thinking?

Al-Noor: When someone like me speaks out for Israel, I challenge everybody’s idea of what they think they know about Zionism and the country. It changes minds. Whenever non-Jews are pro-Israel, they get more attention and credibility, and are taken much more seriously. I can also speak to Muslims at a theological level that is rarely ever reached or talked about.

But, the Jewish and pro-Israel world needs to do more to reach out to people like me, to bring us into the community and make us allies. You have to start educating the public about Israel, because you aren’t getting anywhere when you’re only talking to Jews, while the majority of the public isn’t Jewish.

You have to communicate with Muslims, in particular. I’m actually pushed away by many Jews who are suspicious of my motives. I’ve been called a “lying terrorist” many, many times by people who think I only talk about peace so that I get infiltrate the Jewish community and attack from the inside.

This breaks my heart, because I’m here and trying to be an ally. I’ve devoted my life to this work.

The Algemeiner: What should the pro-Israel and Jewish world know about the Muslim community?

Al-Noor: First, that there is a big difference between Islam and Islamism. Islam is a religion that can exist in secular society; Islamism is the violent attempt to force that on other people, like ISIS.

Terrorism is a cycle: there is a terrorist attack, then the Muslim community is marginalized, which breeds more terrorism, and so on. We need more dialogue to stop this sequence, and not to give up on changing things before we even start.

It actually says in the Koran that some of its verses are metaphorical and some literal — and it states outright that there will be people who will select verses in order to harm others. It’s all about interpretation and education.

The Algemeiner: What is the attitude of mainstream Muslims?

Al-Noor: Antisemitism is entrenched in the community. Growing up, I had antisemitic thinking so ingrained in me, I didn’t even notice it until I was older and had learned more. Even though most of my friends were Jewish or Christian, not Muslim, I remember thinking, “Why are all the Jews rich? Why do they have big noses?”

And the community’s deep-set antisemitism only got much worse, exploded, after the establishment of Israel. We are all taught that the county is evil, that it’s a Nazi and apartheid state, committing genocide. In America, where there are a lot of Palestinians, it is particularly bad.

Muslims stand with our Ummah, the term for Muslim peoplehood. So, Palestinians are seen as our brothers and we are taught that they are being oppressed. I really don’t think Muslims would care about Palestinians if they weren’t Muslim — but, even more, if their “oppressors” weren’t Jewish. The Muslim world doesn’t care about what’s going on in Pakistan — and that’s an actual apartheid state — because the oppressors there aren’t Jewish. But Muslims need to start looking at the facts about Israel and stop getting their information from anti-Israel sources.

The Koran says — and I’m paraphrasing here — “The holy land belongs to the Jewish people and one day all the Jews from the four corners of the earth will converge on Israel.” What is that if not the state of Israel?

The Algemeiner: So, what can be done to try and change these perceptions?

Al-Noor: I am the social media intern for the Institute for Jewish Muslim Action (IJMA), a young organization started by two Rabbis and a Muslim to educate people about the Judeo-Islamic tradition and what makes the two nations natural parents. I also work at Binghamton’s Center for Civic Engagement, where I help students volunteer and get politically engaged. I’m getting a double Masters in Public Administration and Student Affairs Administration, so I’ll be able to work in government or at universities to build interfaith dialogue.

The Algemeiner: How do you view the future of Zionism?

Al-Noor: Israel has a lot of enemies, but I believe things will change. The world will one day realize its mistake, like it realized with the Holocaust, and will become much more friendly to Israel. Don’t give up on hope and peace, because it can still happen. Try to build bridges, and if you can change one person’s mind, that will start a chain reaction.


Nobel Peace Prize Winner: Israel Can Teach Europe to Fight ISIS While Preserving Freedoms Muslim's screaming “Death to America” in this US city after Trump’s victory