I’m a Muslim, a woman and an immigrant. I voted for Trump. 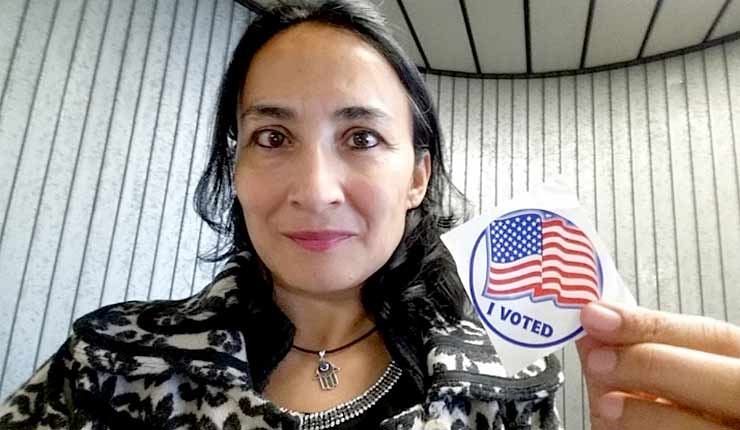 Asra Q. Nomani is a former Wall Street Journal reporter and a co-founder of the Muslim Reform Movement. She can be found on Twitter at @AsraNomani

A lot is being said now about the “silent secret Trump supporters.”

This is my confession — and explanation: I — a 51-year-old, a Muslim, an immigrant woman “of color” — am one of those silent voters for Donald Trump. And I’m not a “bigot,” “racist,” “chauvinist” or “white supremacist,” as Trump voters are being called, nor part of some “whitelash.”

In the winter of 2008, as a lifelong liberal and proud daughter of West Virginia, a state born on the correct side of history on slavery, I moved to historically conservative Virginia only because the state had helped elect Barack Obama as the first African American president of the United States.

But, then, for much of this past year, I have kept my electoral preference secret: I was leaning toward Republican presidential candidate Donald Trump.

Tuesday evening, just minutes before the polls closed at Forestville Elementary School in mostly Democratic Fairfax County, I slipped between the cardboard partitions in the polling booth, a pen balanced carefully between my fingers, to mark my ballot for president, coloring in the circle beside the names of Trump and his running mate, Mike Pence.

Trump supporters revel in victory across the nation

After Hillary Clinton called Trump to concede, making him America’s president-elect, a friend on Twitter wrote a message of apology to the world, saying there are millions of Americans who don’t share Trump’s “hatred/division/ignorance.” She ended: “Ashamed of millions that do.”

That would presumably include me — but it doesn’t, and that is where the dismissal of voter concerns about Clinton led to her defeat. I most certainly reject the trifecta of “hatred/division/ignorance.” I support the Democratic Party’s position on abortion, same-sex marriage and climate change.

[Did you vote for Donald Trump? Tell us why.]

But I am a single mother who can’t afford health insurance under Obamacare. The president’s mortgage-loan modification program, “HOPE NOW,” didn’t help me. Tuesday, I drove into Virginia from my hometown of Morgantown, W.Va., where I see rural America and ordinary Americans, like me, still struggling to make ends meet, after eight years of the Obama administration.

Finally, as a liberal Muslim who has experienced, first-hand, Islamic extremism in this world, I have been opposed to the decision by President Obama and the Democratic Party to tap dance around the “Islam” in Islamic State. Of course, Trump’s rhetoric has been far more than indelicate and folks can have policy differences with his recommendations, but, to me, it has been exaggerated and demonized by the governments of Qatar and Saudi Arabia, their media channels, such as Al Jazeera, and their proxies in the West, in a convenient distraction from the issue that most worries me as a human being on this earth: extremist Islam of the kind that has spilled blood from the hallways of the Taj Mahal hotel in Mumbai to the dance floor of the Pulse nightclub in Orlando, Fla.

In mid-June, after the tragic shooting at Pulse, Trump tweeted out a message, delivered in his typical subtle style: “Is President Obama going to finally mention the words radical Islamic terrorism? If he doesn’t he should immediately resign in disgrace!”

Around then, on CNN’s “New Day,” Democratic candidate Clinton seemed to do the Obama dance, saying, “From my perspective, it matters what we do more than what we say. And it mattered we got bin Laden, not what name we called him. I have clearly said we — whether you call it radical jihadism or radical Islamism, I’m happy to say either. I think they mean the same thing.”

By mid-October, it was one Aug. 17, 2014, email from the WikiLeaks treasure trove of Clinton emails that poisoned the well for me. In it, Clinton told aide John Podesta: “We need to use our diplomatic and more traditional intelligence assets to bring pressure on the governments of Qatar and Saudi Arabia, which are providing clandestine financial and logistic support to ISIL,” the politically correct name for the Islamic State, “and other radical Sunni groups in the region.”

The revelations of multimillion-dollar donations to the Clinton Foundation from Qatar and Saudi Arabia killed my support for Clinton. Yes, I want equal pay. No, I reject Trump’s “locker room” banter, the idea of a “wall” between the United States and Mexico and a plan to “ban” Muslims. But I trust the United States and don’t buy the political hyperbole — agenda-driven identity politics of its own — that demonized Trump and his supporters.

I gently tried to express my thoughts on Twitter but the “Pantsuit revolution” was like a steamroller to any nuanced discourse. If you supported Trump, you had to be a redneck.

[Why this Frenchman plans to resist President Trump — by becoming a U.S. citizen]

Thought-provoking opinions and commentary, in your inbox daily.

Days before the election, a journalist from India emailed me, asking: What are your thoughts being a Muslim in “Trump’s America”?

I wrote that as a child of India, arriving in the United States at the age of 4 in the summer of 1969, I have absolutely no fears about being a Muslim in a “Trump America.” The checks and balances in America and our rich history of social justice and civil rights will never allow the fear-mongering that has been attached to candidate Trump’s rhetoric to come to fruition.

What worried me the most were my concerns about the influence of theocratic Muslim dictatorships, including Qatar and Saudi Arabia, in a Hillary Clinton America. These dictatorships are no shining examples of progressive society with their failure to offer fundamental human rights and pathways to citizenship to immigrants from India, refugees from Syria and the entire class of de facto slaves that live in those dictatorships.

We have to stand up with moral courage against not just hate against Muslims, but hate by Muslims, so that everyone can live with sukhun, or peace of mind, I finished in my reflections to the journalist in India.

He didn’t get the email. I didn’t resend it, afraid of the wrath I’d receive. But, then, I voted.