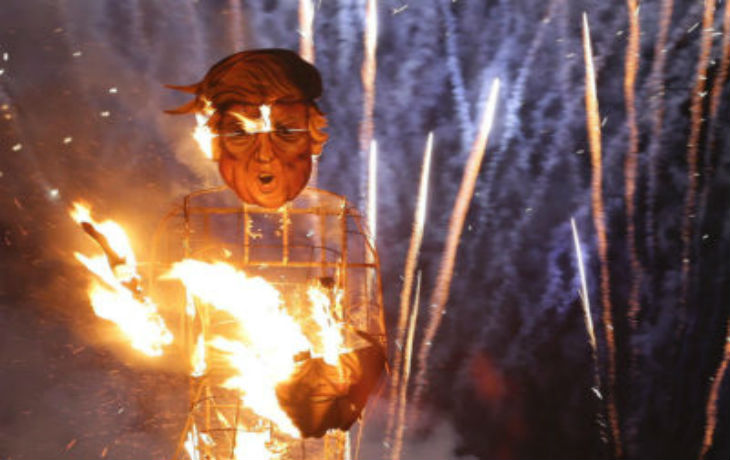 Once again, the black hand of George Soros has reached into America’s political system, this time as the man behind the money that’s funding the on-going and violent anti-Donald Trump protests around the country.

Note to protesters: Setting fires, thwarting traffic, screaming obscenities and disrupting the lives of the working sane to rebel against democracy – despite the fact that it was democracy in action the brought Trump to the White House – is insanity in action.

“MoveOn.org, a liberal activist group that has exploded all across the nation, is funded by Soros’ Open Society Foundations. It is now well known that MoveOn.org was responsible for many of the riots and protests at Donald Trump’s campaign rallies, some of which became violent and dangerous.

Wednesday – the day following Trump’s victory – MoveOn.org moved into action. The group put out a notice on their Facebook page, announcing they would conduct ‘peaceful gatherings of resistance’ all across the country Wednesday evening.”

Well, guess it wasn’t so peaceful after all.

As news from around the country by social media posters revealed, some protesters blocked traffic, others shouted “f–k the police,” others blocked Americans from making their daily commutes to work, still others outright clashed with police, and more set fires, destroyed and defaced properties and burned American flags.

“We will gather … in cities across the nation to affirm to ourselves and one another that, despite the outcome of this election, we will not give up. No matter what challenges confront us in the times to come, we will unite with one another and defend our communities—across race, religion, gender, age, ability, national origin, immigration status, sexual orientation, class, and all of our identities. The fight for a nation with liberty and justice for all—and with an economy and democracy that work for everyone—continues.

“Those of us in immigrant, refugee, and Muslim communities are threatened. We reject and are prepared to resist attacks on all of our communities, and we commit to care for, look out for, and stand with one another. An attack on any of us is an attack on all of us. Tonight, we will join hands, share our reactions, pledge our mutual solidarity, and resolve to forge ahead together in this moment of peril. We have experienced setbacks before, and we have always come back. Our movements are resilient and unstoppable.”

Note the call to resistance – the logic being that these leftists are the ones under attack, and only reacting in rational defense.

This is what nearly eight years of an Obama administration, including a radical, activist Justice Department and a propaganda-pusihng Education Department, have brought. Perhaps a Trump administration means that come January 20, the adults are back in charge.