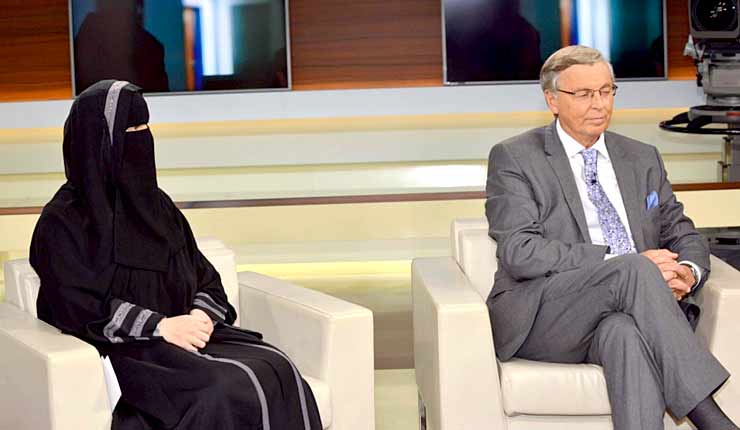 Nora Illi, the women’s representative of an unofficial group called the Islamic Central Committee of Switzerland, wears a niqab Sunday night on a talk show in Berlin. Next to her is Wolfgang Bosbach, a lawmaker from Chancellor Angela Merkel’s Christian Democratic Union party.

She certainly was an unusual TV guest: Nora Illi, the representative for women of a Swiss Muslim group.

But to many viewers of a popular German Sunday evening talk show, the 32-year-old convert wearing a face veil was also a provocation. It was not because she chose to cover much of her face at a time when a ban on full-face veils in public has been proposed. But rather it was her comments that caused an immediate public backlash.

Speaking on the show, Illi made arguments that some non-Muslims would probably disagree with: “In Islam, women have many rights and possibilities. We don’t have to balance family and career as much as other women do. We can evolve in our role.”

More controversially, though, Illi appears to think that it is understandable and even praiseworthy that some European youths might think of Syria as the “promised land” and fight there for militant groups, according to social media posts she wrote and that were read out on the talk show.

Referring to those young people, Illi had written in a Facebook post: “Muslims are faced with repressions all over the world. It is no wonder that the temptation to break out of that misery is gigantic.

“One must highly praise such a determination as civil courage, given that context.”

Women “who feel that they have been shut out by society and want to break away could view Syria as the promised land, as the only way out,” she also has been quoted as arguing.

Her comments were criticized by journalists and talk show panel participants. German media outlets said her TV appearance was being perceived by many viewers as a “call for jihad.” Illi has rejected such claims.

Illi’s comments come at a sensitive time. After the influx of more than 1 million refugees into the country over the past two years, relations between Muslims and other communities have become a major focus of Germany’s public debate. Anti-Islam groups, such as Pegida, continue to attract thousands of supporters at their weekly marches.

Meanwhile, Syrian refugees complain about German mosques being “too conservative” for them, indicating divergent opinions within Muslim communities in the country.

Such debates are unlikely to disappear over the next months.

The possible prohibition of burqas and a revamped anti-radicalization strategy may feature in the run-up to next year’s general elections.