Muslims in Italy: ‘Give Us Back Our Mosques or We Will Pray to Allah in the Vatican’ 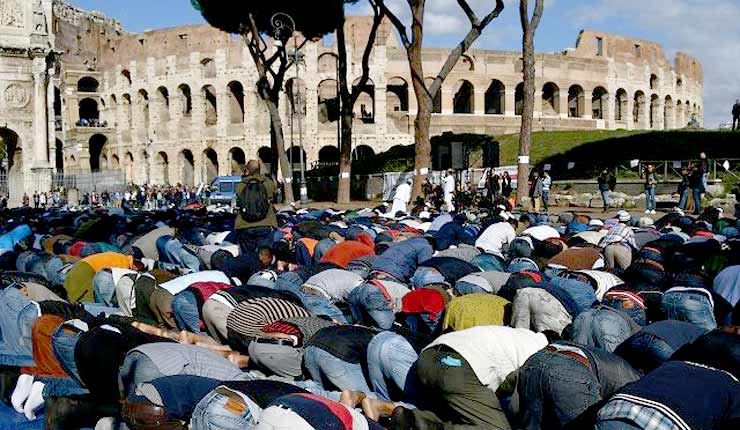 Despite a major Muslim protest at the Colosseum against the closure of illegal mosques, Rome police have continued shutting down so-called “garage mosques,” and now Muslims are threatening to invade Saint Peter’s Basilica to pray there

This week, authorities closed down another makeshift mosque in Rome for failure to meet building norms and for non-compliance with safety standards, the sixth such mosque-closing in the last months.

In response, Muslims in Rome have threatened to invade the Vatican to pray in Saint Peter’s Basilica, which Italian media are calling Islamic “blackmail.”

“As many as 300 people can pray here; where will we go if it’s closed?”, said a young Muslim man identified only as “Hussein,” who works in a hardware store not from one of the “Islamic centers” that police have closed.

This center is located in the eastern suburbs, a district where half of the inhabitants are Muslims and the heart of the Islamic protest against the closure of Islamic places of worship.

“We live here, we work here, we cannot go to pray in Parioli [the other side of town],” says Anwar, the president of a neighborhood prayer hall.

“The problem must be solved at the social and political level,” said Bachcu, the organizer of the Coliseum protest. “Continuing with the closings will not solve anything. A prayer room cannot be closed due to a problem in urban planning. Prayer is our fundamental right and if they insist on shutting down the mosques, we will pray in the streets,” he said.

A number in Rome’s Muslim community have suggested staging a more provocative protest in the form of a “flash mob.”

“They wanted to go and pray ‘Allahu Akbar’ throughout the city, all the way to the Vatican,” said Bachcu. “In the end we managed to stop them, but if they start these initiatives, what do we do?”

Last month, thousands of Muslims gathered outside the Roman Colosseum to protest the closures of a number of “garage mosques,” purportedly to avoid young people becoming radicalized.

During the demonstration, an imam led the group in chanting “Allahu Akbar,” as they prostrated themselves on the ground.

The Muslim leaders said that another peaceful protest has been organized for Friday, November 11. In the Prati area of Rome, hundreds of Roman Muslims are expected to attend a street march and to all pray together “facing Mecca.”