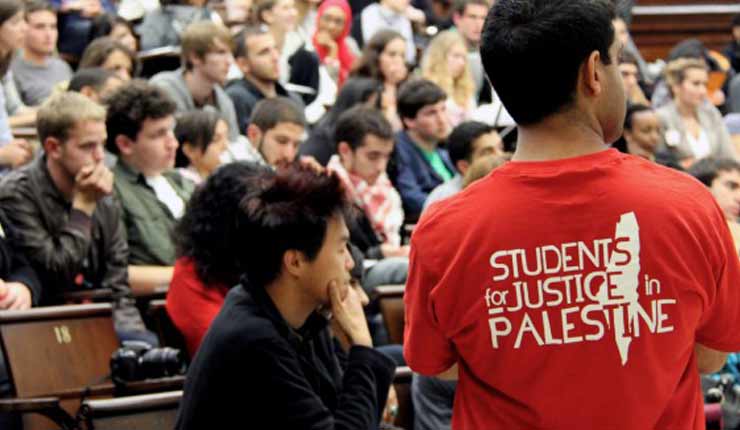 The organizers of an anti-Israel conference held over the weekend at George Mason University restricted press access only to “movement outlets” that support economic warfare against the Jewish State, according to statements provided to THE WEEKLY STANDARD by a media coordinator for the event.

The national conference, hosted by Students for Justice in Palestine (SJP), a group that has been criticized by the Anti-Defamation League for demonizing Israel, featured a slew of prominent advocates for boycotting Israel as well as training workshops for student activists.

After TWS was denied press credentials to the conference, a media coordinator said that SJP had “only invited people from what we call movement outlets … because we didn’t want students to be under the pressure of having outlets that might not report in a way that was very friendly to them.”

Conference organizers gave credentials to websites that watchdog groups have condemned for distributing hateful material against Israel and Jews, including Mondoweiss and Electronic Intifada. The left-wing Israeli newspaper Haaretz, which has just under a 4 percent market share in Israel, also received access.

When contacted for comment about its status as a “movement outlet,” Haaretz denied that characterization, telling TWS that their reporter’s attendance “does not imply any endorsement or support of the ideas and opinions voiced at the event.”

The media coordinator, Leah Muskin-Pierret, described SJP’s gathering as a “learning conference,” and suggested that the presence of publications like TWS might upset student attendees.

“We decided that if Mondoweiss wants to write a really cute writeup about ‘hey, students are doing work,’ great, cool, good for them,” she said. “That’s just something that we have the right to do.”

“Unfortunately, you’re not going to find a story here,” she added.

A coalition of free speech activists and pro-Israel groups protested the conference, filling the entrance and holding up signs that condemned SJP as a hate group. Upon learning of an increased police presence surrounding the protests, one attendee tweeted that she would “f— up a Zionist.” Another student who appeared to be an attendee posted a photo Sunday that showed the Israeli flag being used as a doormat, scattered with shoes and garbage bags.

During the conference, students were trained in launching an SJP chapter or boycott campaign on their own campus, with pointers on “how to deal with administration” and “how to prepare for backlash,” according to conference materials obtained by TWS.

“This workshop will take you through the steps of a divestment campaign — planning, research, coalition building, media, and launch,” read the description for one workshop. “You will learn how to choose targets, what goes into writing a resolution, when to launch, and how to prepare for backlash.”

Another workshop titled “(50) Shades of Zionism” taught students the social-historical knowledge needed “to combat Zionism,” with a focus on “the nature of the ideology and its historical progression.”


Trump advisor: ‘West Bank settlements are not an obstacle to peace’ Seven Moroccan Journalists Visit Israel to ‘Improve’ its Image in Arab World