UNESCO on the Temple Mount 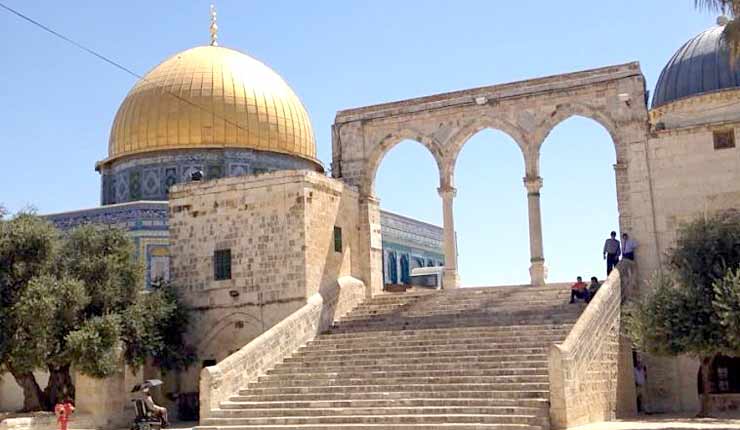 The sun rotates around the world. The world is flat.

There was never a Jewish Temple on the Temple Mount.

When people make foolish declarations with conviction they are usually motivated by a political agenda or religion or both.

The ongoing Palestinian campaign to erase Jewish ties to the holy places of Jerusalem falls under this category. Last October, the Palestinian Authority failed in its attempt to garner enough support in the United Nations Educational, Scientific and Cultural Organization for a resolution that ignores Jewish ties to the Temple Mount and that mentions only Muslim ties to the site.

This October it will try again.

In April, UNESCO’s 58-member Executive Board met in Paris and adopted a resolution that spoke solely of Muslim ties to the Temple Mount.

The 21-members of UNESCO’s World Heritage Committee had been poised to vote on the matter as it wrapped up its 40th session in Istanbul.

A botched coup attempt against the Erdogan government postponed the vote, which is slated to take place later this month in Paris at the World Heritage Committee’s headquarters.

The resolution had been initially submitted by Jordan and the PA as part of the bureaucratic process by which the World Heritage Committee reaffirmed the placement of Jerusalem and its Old City ramparts on its World Heritage in Danger list.

As part of the confirmation process Palestinians and Jordan introduced a text attacking Israeli actions, including archeological digs within Jerusalem’s Old City which continue to unearth proof of Jewish ties to the area. But although the Temple Mount is Judaism’s holiest site, it is referred to solely by its Muslim name of al-Haram a-Sharif (the Noble Sanctuary).

Palestinians’ preoccupation with ancient history has little to do with culture or science and everything to do with politics. The underlying assumption behind Palestinian activism in UNESCO seems to be that if Jews’ ties to Jerusalem and to the Temple can be denied or questioned, it serves the cause of Muslims who stake a claim to the place. Conversely, admitting the simple historical truth that there was a Jewish temple on the Temple Mount is, according to this mode of thinking, a way of weakening Palestinian and Muslim claims to Jerusalem. Or at the very least it calls into question Palestinian claims that they are the indigenous population and the Jews are trespassers.

Muslims’ interest in Jerusalem has ebbed and flowed in concert with historical developments. During the Crusades, Muslims emphasized the importance of the city.

Jerusalem’s importance in the eyes of Muslim increased considerably after the Six Day War, when control of the city fell into the hands of Israel. A concerted attempt was launched to reject Jewish ties to Jerusalem. At other times in history, Muslims were more willing to admit the centrality of Jerusalem for Jews. For instance, in a guide to al-Haram a-Sharif published in 1930 by an organization called the Supreme Muslim Council, the authors admitted “its identity with Solomon’s Temple is beyond dispute.”

All of this is, however, beside the point. Jews’ claims to sovereignty in Israel should not be based on the veracity of archeological finds or the willingness of international forums to recognize Jewish ties to the Land of Israel. No other nation’s sovereignty hinges on the findings at an archeological dig.

Israelis and Palestinians are engaged in a territorial dispute.

But referencing ancient history does not clarify the conflict, it only complicates it further by engaging in a game of who was here first when the question at hand is how can we live together now.

No one with intellectual honesty seriously doubts that the Jewish people has religious, cultural and historical ties to the Land of Israel. Any attempt to deny these ties is a perversion of science. That UNESCO is lending its hand to such perversion is a tragic testimony to the sorrowful state of UN institutions.

But all of this is irrelevant and counterproductive to the real issue: finding a way in which Israelis and Palestinians can coexist peacefully on a tiny slab of land that happens to be endowed with a rich, resonant history.


Now even Juncker hits out at migrant crisis: Refugees refusal to relocate is OUTRAGEOUS Nato puts 300,000 ground troops on 'high alert' as tensions with Russia mount