Israel’s Arab soldiers who fight for the Jewish state 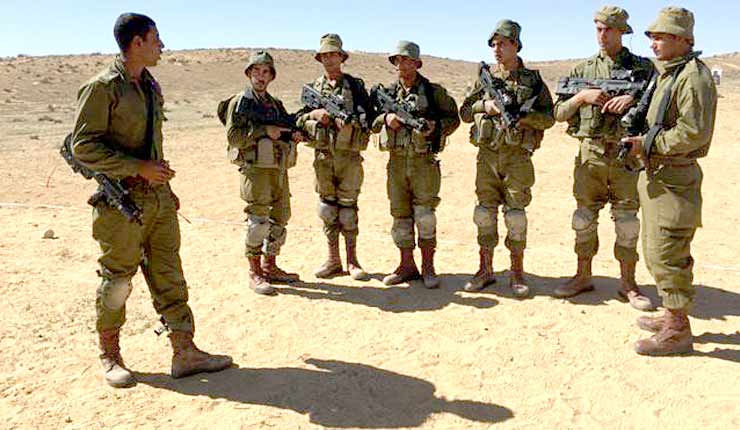 It is dawn in the Negev desert and Mahmud Kashua is saying his first prayers of the day – a gun by his side. Mahmud is one of a growing number of Israeli Arabs who have volunteered to serve in the army of the Jewish state.

“I consider myself an Arab and a Muslim but I also consider myself part of this country,” Mahmud tells me during a break in live fire practice on the range. “It’s our state and we have to give back, to help as much as we can to the state which protects us.”

Over six months a BBC Arabic documentary team gained extraordinary access to the Gadsar – an all-Arab unit of 500 within the Israeli Defence Force. Ten times as many Israeli Arabs – Muslims and Christians – are joining the IDF compared to three years ago.

“Our mission is to enlist as many as we can,” says Col Wajdi Sarhan, head of the IDF Minorities Unit. “We have a few hundred and we want to double that in the next year.”

Twenty per cent of Israel’s population is Arab but only about 1% of them serve in the army. Enlisting is controversial in many of their communities.

Hanin Zoabi is an Israeli Arab MP who identifies herself as Palestinian and is a fierce critic of the state.

“This small marginalised group that serves in the Israeli army which serves Israel against its people knows they are crossing a patriotic red line,” she says.

“Ninety per cent of the Arabs who serve in the Israeli army don’t have equality with Israelis. Israel does not need them to protect its security, it’s a political issue – first to divide and rule.”

We followed the Gadsar as it became the first Israeli Arab unit ever to serve on the occupied West Bank, home to 1.7 million fellow Arabs – Palestinians.

It is a tense time – in the past year, 37 Israelis have been killed in a wave of knife, gun and car-ramming attacks by Palestinians or Israeli Arabs.

More than 200 Palestinians – mostly attackers, Israel says – have also been killed in that period.

At a checkpoint between two Israeli settlements, Mohammed Ayashi, a Muslim soldier, is stopping some Palestinian cars.

“Sometimes its hard because I am an Arab like them and they look down on me but in the end I am doing my job and I have to do this,” Mohammed says. “Some people from the way they answer us you can tell they can’t stand us – they look down on us with contempt.”

One driver says he understands Mohammed is just doing his duty and is free to do as he wants but another is clearly angry.

“We wish an Arab soldier wouldn’t do this – we are all Arabs,” says the driver. “We consider him a Palestinian and he is serving the army of occupation. I don’t know what to make of it.”

On the Gadsar base Mahmud and the other new recruits take the oath of allegiance to Israel. His parents and fiancee are there to see him swear on the Koran as he is given his own gun.

“I’m proud of him – this is his choice and we back him. We are happy and he is happy,” says his father, Jamil Kashua.

Back at home in an Arab town in northern Israel there is a barbeque in Mahmud’s honour. But he will only wear his uniform when he is in the family compound.

“A few guys saw me wearing the uniform and told me that I’m a traitor. I told them that’s my own business but I don’t care what others say,” Mahmud says.

“If I’m a traitor then why is he living in this state?”

In contrast to many of his friends Mahmud gets a good salary as a soldier. Unlike Jewish recruits he can apply for a grant of land to set up his own home.

“Guys who go to the army have a good position and live comfortably,” says Jamil. “The army supports them financially and their lives move forward.”

For the Israeli government increasing the number of Arabs in the army is key to integration of the two communities.

“We are doing our utmost to integrate minorities into the army to maintain the status quo demographically,” says Col Sarhan. “Serving in the army is a great platform to connect the Muslim community to the state.”

Security for the future

Some Israeli Arab politicians accuse the government of bribery. “Israel is after people to serve in the army who are poor and have no work,” says Hanin Zoabi.

“Fifty-two to 54% of our Palestinian people in Israel are under the poverty line – and the government’s policy of creating poverty obliges people to look for the only solution they can.”

The peace process is not going anywhere it seems – the two state solution is still a distant prospect – so many young Arabs see integration into the Israeli military as their future.

“Ten people from my town are serving in the army now. I have friends who want to enlist,” says Mahmud. “I encourage everyone to join – to improve his or her life and look to their future.”

You can watch Israel’s Arab Warriors on BBC Arabic TV at 19:10 on Tuesday 8 November.

Today: UN to condemn Israel 10 times; 3 for the rest of world combined France Closes Radical Mosques – Why Were They Allowed?