Michel Aoun in Iranian Media: from Warlord to Man of Peace 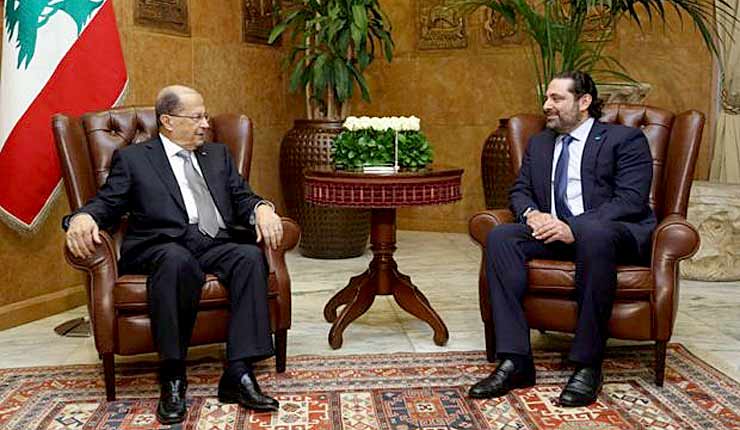 “A warlord allied to Saddam Hussein and the Zionist enemy”.

“A man of peace who can save Lebanon from great dangers ahead.”

Are we talking of the same man? Yes, we are. The man is retried general Michel Aoun who has been sworn in as the new President of Lebanon. The comments on him come from the media of the Islamic Republic in Iran and highlight the difference that the passage of decades could make in the assessment of friend and foe by an opportunist regional power.

“The Maronite forces were led by a man who has sold Lebanon to the enemy,” the paper claimed.

The second comment came from the daily Etemad (Confidence) on November 1 as part of an analysis that saw Aoun’s presidency as “a major setback for the Zionist enemy.”

However, Aoun, or “General” as his supporters like to call him for short, only really caught the attention of the Iranian mullahs in 1988 when he set himself up as “Prime Minister” in East Beirut, claiming supreme authority over Lebanon.

The Tehran media saw Aoun’s bid for power as a plot by Iraqi dictator Saddam Hussein to score a point in the region to partly cover the humiliating end of his eight-year war with Iran in August 1988.

Having created a branch of the so-called Hezbollah in Lebanon in 1982-83, Iran needed time to train this militia for use as a means of exerting pressure on communities hostile to the Islamic Republic. Tehran saw Aoun as a pawn jointly advanced by Israel and Saddam Hussein to counter Iran’s plans for the domination of Lebanon with the help of its Syrian allies.

“It is urgent that Iran prevent the formation of a new counter-revolutionary base against it in Lebanon,” the daily Jumhuri Islami commented in July 1989, after the death of Ayatollah Ruhallah Khomeini, the founder of the Islamic Republic.

Believing that Syria alone wouldn’t be able to keep Lebanon on the side, Tehran moved to create a bloc of its own allies by inviting the leaders of Hezbollah Sobhi al-Tufayli and the head of the rival Amal Movement Nabih Berri to Tehran for unity talks. To keep Syria on board, Tehran also divided the Syrian Foreign Minister Farouk Al-Sharaa for two days of negotiations presided over by FM Al-Akbar Velayati.

Iran’s agenda was clearly spelled out by Ali Khamenei who had taken over as “Supreme Guide” when he received the Lebanese Shi’ite leaders and the Syrian diplomat.

“Fighting the Maronites in Lebanon is the same as fighting Israel,” Khamenei told the meeting.”

Khamenei described the Lebanese political system as “one of the most regressive in the world” and compared it with Apartheid in South Africa.

“In Lebanon, a Maronite minority unjustly rules a majority, which is twice or three times larger, and its rule is based on betrayal of Lebanon’s territorial integrity and independence in the service of Zionist goals and Zionist regime,” Khamenei told the group.

Reflecting Khamenei’s instructions, Amal and Hezbollah, backed by Syria, issued a communique pledging to fight to end what they described as “Zionist occupation”. They specifically promised to fight “the Michel Aoun clan which is backed by Zionists and the criminal Iraqi regime.”

“A new vision of Lebanon’s future is born in Tehran ”Jumhuri Islami commented at the time. “In this vision, Lebanon will have a new political system based on justice and honorable coexistence among all communities, enabling Lebanon to play its full part in the struggle against the Israeli usurper.”

Aoun, however, continued to resist Syrian occupation and Iran’s attempt at expanding its influence in Lebanon. His end draw close when Saddam Hussein invaded Kuwait, thus turning the Western powers, notably the United Sates, against him. An alliance that included the US, Syria and Iran was hard to resist for Aoun and his isolated band of devotees in their East Beirut bunkers.

Even the Tehran media grudgingly noted that “the little general” and his men showed “desperate courage in a battle against forces many times superior.

President George HW Bush gave the green light to Syrian leader Hafez Al-Assad to finish off Aoun. Thanks to French President Jacques Chirac, a friend of Saddam Hussein, Aoun was escorted safely out of Beirut and into a 15-year exile in France.

During those years, the Iranian media remembered Aoun only occasionally, gradually softening its tone as the exiled general indicated that his fight had been against Syrian occupation of Lebanon not Iranian influence in Lebanon. By the mid-1990s, Aoun had established reliable links with both Hezbollah and Amal and held meetings with Iranian Ambassador to Paris Ali Ahani.

Iran has definitely revised its assessment of Aoun.

Some commentators now consider him as “our man in Beirut”. The daily Kayhan, believed to reflect Khamenei’s views, headlined Aoun’s election as “Hezbollah’s Historic Victory in Lebanon” and ran a photo showing Aoun being received by Hezbollah leader Hassan Nasrallah in his office.

The paper’s top editorial had this to say: “Aoun’s election illustrates (the fact) that the Resistance Movement (Muqawamah) led by Nasrallah is the principal force in ending the political deadlock in Lebanon even though the movement has refrained from intervening in domestic political squabbles.”

The daily Etemad, however, cast Aoun as a symbol of democracy in Lebanon. In a column signed by Massoud Idrisi, a former ambassador of Iran to Beirut, the paper claimed: “Democracy took place in Lebanon, and the figure who was more popular and had more votes has become president.”

It added: “In Lebanon, the president has an important role in adjusting the country’s foreign affairs.”

Idrisi then predicted Aoun would make resolving issues in diplomatic relations with international and regional powers a priority.

According to Edrisi, France, the United States, Iran and Saudi Arabia are the countries that Aoun will likely attempt to strengthen relations with. “I think Iranian-Lebanese political ties will be warming further in the coming days. Aoun is a powerful figure, and he can shape a balance regarding the influences of Iran and Saudi Arabia inside Lebanon.”

The daily Watan-Emruz (Homeland Today) speculated that as president Aoun would focus his energies on keeping Lebanon “out of harm’s way” in a regional ablaze with multiple conflicts and tragedies.

The daily Arman (Ideal) noted Aoun’s “capacity for endurance” but warned that he has “a tough task ahead.”
“Nothing indicates that the road ahead in Lebanon is going to be smooth.”

A similar note of caution came from the official news agency IRNA. It noted that Aoun, aged 81, is the “most popular Christian figure in Lebanon” and claimed that his election is “without a doubt a victory for Hezbollah and the 8 March coalition.”

Nevertheless, IRNA warned that Aoun’s election isn’t “the end of political divisions, but the reconfiguration of forces” in Lebanon.

IRNA’s cautious tone is in order. In a career spanning three decades, Aoun may have acted as weathervane. But, in the final analysis, he has remained his own man. That is one quality that friend and foe would ignore at their peril.


Inside Germany's No-Go Zones: Part I - North Rhine-Westphalia A Firsthand Account of Anti-Israel Violence at a UK University