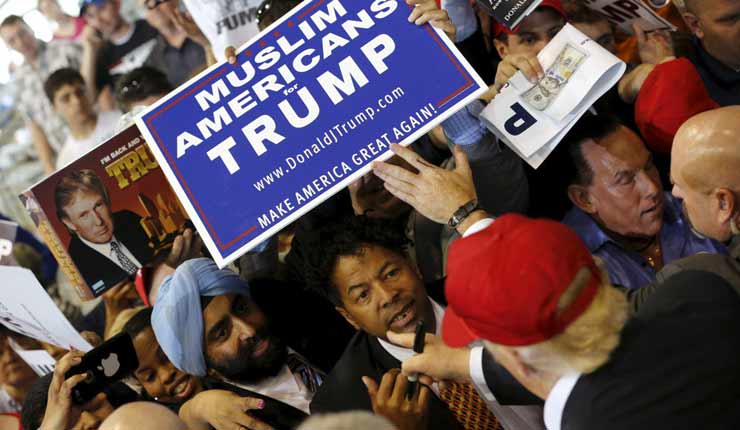 Republican Arab-American citizen Nedal Tamer has been unfazed by Donald Trump’s sexual assault allegations, shoddy debate answers, or empty accusations against Democratic rival Hillary Clinton. He believes Trump will ‘save Islam’ once he becomes president of the United States.

Trump and the Arab world

When asked what Donald Trump would bring to the Arab world, Tamer replied saying ‘peace’.

“He’s also gonna help the Arab world and Muslims by making peace or by stopping the war. What’s the worst that can happen now in Libya, Iraq & Syria? People are losing their lives there for what? Hillary destroyed the Arab world…Trump is better for Arab and Muslim world than Hillary…she gave power to Iran, and Iran has agenda against the Arabs,” he said.

Tamer largely blames Clinton for the Libyan crisis, questioning what she did for the Arab region as the Muslim religion – even saying that she ‘betrayed the Arab world.’

“I think he [Trump] will negotiate and stop funding the ISIS. He will stop ISIS. I think Trump will save Islam,” The republican said.

“If we take these groups out of Islam; he is saving Islam and save the picture of Islam around the world. Look at where we are now and we don’t know what would happen.”

Skewed by the media

The Republican candidate has come under fire as of late after 15 women have come forward accusing Trump of sexually assaulting them. The New York Times has come out with an in-depth report in which alleged victim Jessica Leeds accuses him of ‘physically violating’ her aboard a plane in the early 1980s. The real estate magnate replied with a tweet discrediting the feature as ‘total fabrication.’

“Media controls 80pc of the population here. They believe everything the media says. These 5-6 women woke up now, one month before the election, remembering their sexual assault? It’s too obvious,” Tamer said.

In addition to these allegations, Trump has been caught on tape speaking lewd comments about woman to TV host Billy Bush, claiming he can ‘do anything’ to women.

He has since apologized – a rarity – publicly for the comments.

Tamer is among a small percentage of Arabs in the United States that have campaigned for Trump, believing his business-minded approach and distance from actual politics – unlike his competitor – are what put him ahead.

“We pray Trump becomes the President so we don’t have more problems and more scenarios by Hillary,” he concluded.


German sailors abducted, killed in Philippines by Islamic Terrorists President Assad laughs and says he sleeps fine when asked about all the children killed in Syria