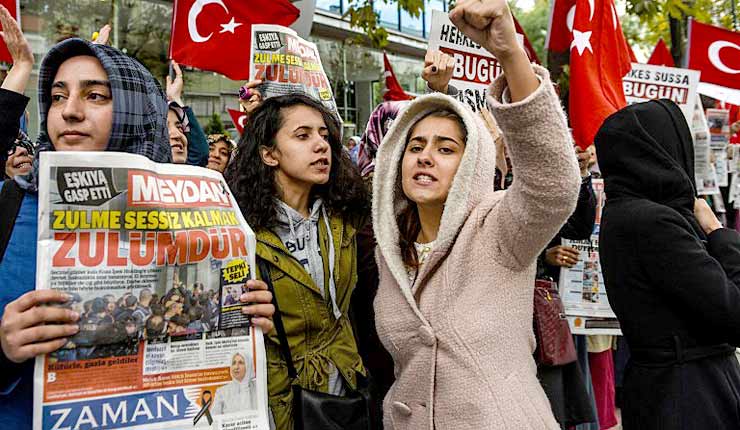 The European Commission spoke out for press freedom in Turkey. Which seems praiseworthy – until you take a closer look

‘Better late than never’, was the general and lukewarm reaction to the statement of the European Commission, delivered by European Commissioner for Enlargement Negotiations Johannes Hahn, about the problematic situation of press freedom in Turkey. Rather late indeed, because since the coup attempt in Turkey on 15 July, already more than a dozen media outlets have been forced to close and the European Commission was remarkably silent about that. Only now that the Istanbul-based left-secular Cumhuiyet is targeted does the EC open its mouth. And thus shows that it does not back the principal of press freedom.
In the early hours of Monday morning, the police started searches at the houses of several contributors to Cumhuriyet, and well known journalists, like editorinchief Murat Sabuncu and Kadri Gürsel, were detained. It was far from the first attack on an outlet that still has the guts to criticize the government of president Tayyip Erdogan (officially it’s the government of prime minister Yildirim but naming the cabinet after him wouldn’t do justice to his status as puppet). Since 15 July at least fifteen papers and news agencies have been closed. Why didn’t the European Commission speak out about that?

Destructive and lethal
That’s not so hard to understand. Many of these fifteen media outlets are connected to the Kurdish political movement. In September IMC TV, the only channel that reported on the realities of the large scale, destructive and lethal operations of the Turkish security forces in the Kurdish southeast of Turkey, was closed. The doors of the women’s’ news agency Jinha, based in the south-eastern city of Diyarbakir, were sealed by the authorities, as were the doors of the Kurdish news agency Dicle. Azadiya Welat, the only Kurdish language daily in Turkey, got a publication ban. The biggest Kurdish TV channel that is beamed into millions of Kurdish households in Turkey from its studios in Belgium, MedNûce, no longer exists: the French satellite company Eutelsat pulled the plug, pressured by Turkey. The European Commission stayed silent every time.

Turkey accuses all these media of making propaganda for the PKK, the armed Kurdish movement that has again been in a bitter war with the state since the summer of 2015. However, these media outlets have been, sometimes for many years (Dicle, Azadiya Welat) and sometimes since rather recently (Jinha), pretty reliable sources when it comes to news about the Kurdish cause. And that is of course what bothers President Erdogan. The crimes of the state are supposed to stay secret, as has been customary ever since the foundation of the Turkish republic in 1923.
It was Dicle that, at the end of December 2011, broke the news of a bombing by the Turkish army on the Iraqi border close to the village of Roboski, in which 34 civilians died. It was Jinha that extensively reported about the dead female PKK fighter Ekin Van, who was left naked by soldiers on a public square in the town of Varto in August last year. Without IMC TV, nobody would have been able to closely follow the battle for the Syrian Kurdish city of Kobani between September 2014 and January 2015.

Liquid concept
Yes, these media are, just like the PKK, part of the broad Kurdish movement. They have never been guilty of punishable acts, like calling for murder or other violence, the only reason why media or journalists could be prosecuted. And ‘propaganda’ is a liquid concept. Just like ‘terrorism’, a term that often tells us more about the stance of the one using the term than about the group concerned. And that’s exactly where it itches.

After all, the PKK is listed as a terrorist organisation by the European Union. President Erdogan would explode with anger if the European Commission were to speak out openly for Kurdish press freedom. Europe, Erdogan would say, is being a PKK mouthpiece and isn’t committed to the war against global terrorism.

The European Commission could in that case grab the opportunity presented to support press freedom. After all, press freedom is in essence unconditional. And making propaganda, whatever you consider that to be, is allowed – this is why Turkish government media also shouldn’t be banned but instead tarred and feathered for the ongoing stream of lies they publish daily. But the European Commission doesn’t dare to be principled, pressured as they are by Turkey because of the ‘refugee deal’ and the wars in the MiddleEast. The (by all means justified) support for Cumhuriyet is ‘safer’ – and illustrates the total cowardice and the lack of principle on the part of Europe.

The Dutch version of this op-ed was published in Dutch daily De Volkskrant on 4 November 2016. Read it here.


Claim: Researchers Covering Up Relationship Between Immigration and Crime The KGB's Middle East Files: Palestinians in the service of Mother Russia