In Plea to Join PLO, Hamas Emphasizes Commitment to Terror 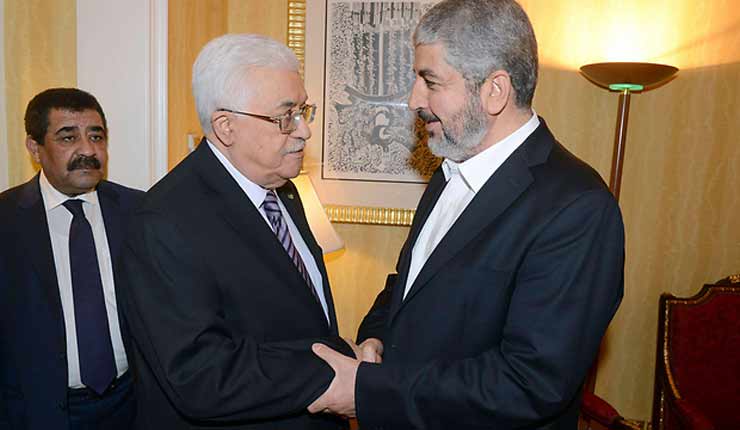 A top official of the Palestinian terrorist group Hamas has called for its inclusion in the Palestine Liberation Organization (PLO), an umbrella group internationally recognized as the representative of the Palestinians, while stressing the Islamist movement’s continued commitment to attacking Israel, The Times of Israel reported on Wednesday.

The PLO is dominated by the Fatah party, which is headed by Palestinian Authority President Mahmoud Abbas. Accepting Hamas into the PLO would call into question Abbas’ commitment to internationally accepted requirements — including rejection of terrorism — for securing a peace treaty with Israel.

Speaking from Qatar, Hamas leader Khaled Meshaal called for a “united authority for inside and outside of Palestine under the umbrella of the Palestinian Liberation Organization.”

“It is time we reconsider the organization [the PLO],” Meshaal continued in a speech broadcast by Al Jazeera from the Fourth Palestinian National Security Conference in the Gaza Strip. “In order to build our lives and political system on democratic foundations, we must be partners in shouldering responsibility and partners in the decision of war and peace.”

Meshaal emphasized that joining the PLO would have no effect on his organization’s commitment to terrorism. “The wager on the diplomatic movement on its own has been proven a failure. Let us agree on a national strategy and that everyone is with the [armed] resistance, which is a legitimate right that raises the cost of the occupation,” he said.

The Hamas charter includes quotes calling for the killing of “warmongering Jews” and envisions a religiously-inspired fight to destroy Israel. In regards to the PLO, it states: “The day The Palestinian Liberation Organization adopts Islam as its way of life, we will become its soldiers, and fuel for its fire that will burn the enemies.”

Meshaal’s bid for a unity agreement came after he met with Abbas in Qatar.

Wasel Abu Yousef, a member of the PLO Executive Committee, told The Times of Israel that the group wants “all of the Palestinian factions, including Hamas, to be within the framework of the PLO.” Addressing Meshaal’s stated intent to continue attacking Israel, Abu Yousef said that “the type of struggle the Palestinians wage will be decided by the PLO. We agree on the basis that the Palestinian struggle will be a popular struggle.”

Shaul Mishal, head of the Middle East program at the Interdisciplinary Center in Herzliya, told The Times of Israel that he thought a merger between Hamas and the PLO was likely. “Both sides are looking to find a common denominator. They realize that to unite is the only effective way to be on the regional map, considering the harsh current events in the region,” he said. “They [the Palestinians] cannot continue working on the bilateral approach with Israel.”

Accepting Hamas into the PLO without forcing it to renounce terrorism would put the Palestinian Authority at odds with the Quartet’s Roadmap for Peace, which requires Palestinian leadership to issue an “unequivocal statement reiterating Israel’s right to exist in peace and security and calling for an immediate end to all acts of violence against Israelis anywhere.”