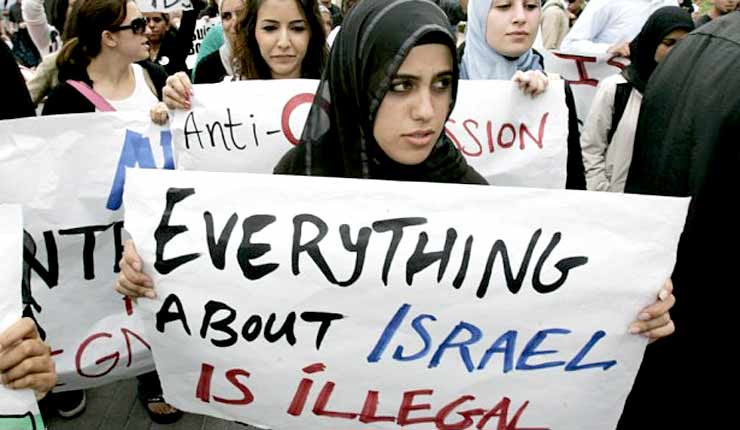 Reports of anti-Semitic incidents on US college campuses have increased, much of it attributed to the rise of the anti-Israel Boycott, Divestment and Sanctions movement, a new report has found.

Researchers at the Maurice and Marilyn Cohen Center for Modern Jewish Studies at Brandeis University conducted the study, which was released in late October. It was based on a survey taken in the spring among Jewish undergraduate students at 50 US campuses who applied to go on the Birthright Israel trip.

The study found that Brooklyn College, Northwestern University and many of the schools in the University of California system are “hotspots,” where the majority of Jewish students perceive a hostile environment toward Israel and over one-quarter sense a general environment of hostility toward Jews on their campus. On these campuses, it appears that the high rates of anti-Semitic harassment and hostility are largely driven by malice toward Israel.

The study also found that one of the strongest predictors of a perceived hostile environment toward Jews and Israel on campus, according to the Brandeis study, “is the presence of an active Students for Justice in Palestine (SJP) group.”

The campuses selected for the study were not chosen randomly, according to the report, “but were purposely sampled based on the estimated size of the campus Jewish population, geographic diversity, public/private status, selectivity, and prior evidence of high levels of anti-Israel hostility or anti-Semitism.”

Some 75 percent of those surveyed reported hearing hostile remarks toward Israel and more than 20 percent said they had been “blamed for Israel’s actions because they are Jewish.” About one-third of those who answered the survey reported being witness to “some form of anti-Semitic harassment, often Israel related.”

The study also found that there are many schools where anti-Semitism and hostility to Israel are negligible. Respondents at several large private universities, including the University of Miami, Washington University and Syracuse, perceive very little hostility toward Israel, and virtually all of those respondents disagree that there is a hostile environment toward Jews.

The study’s authors concluded that while public discussion has focused on legislative remedies to temper anti-Semitism and anti-Israel hostility on college campuses, based on the present research, “our view is that more emphasis needs to be placed on educational strategies.”

“The complex picture painted by this study not only suggests a different policy emphasis, but also reinforces the importance of systematic research to assess the prevalence of anti-Semitic and anti-Israel environments on campuses, and their impact on Jewish students,” they said. “Future research should focus on understanding the dynamics of hostility as they are reflected on different campuses and how they are experienced by both Jewish and non-Jewish students.”