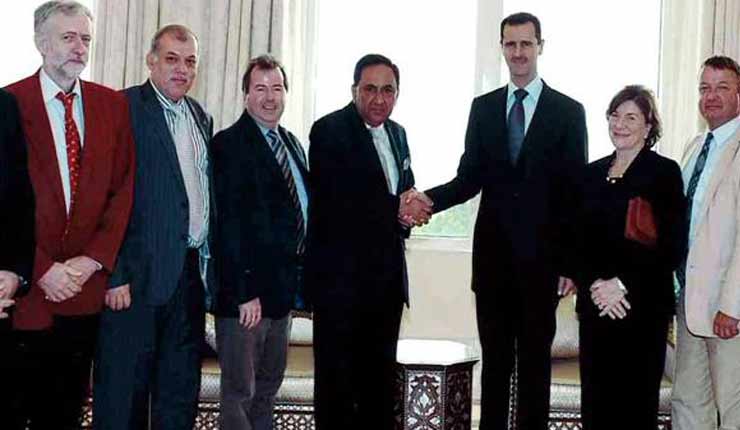 The Labour leader praised Assad for housing half a million Palestinian refugees and appeared to allege Israel meddled in American politics.

During the trip, which cost £1,300 according to Mr Corbyn’s own Register of Members’ Financial Interests, the left wing politician said: “Once again the Israeli tail wags the US dog.”

The British-based Palestinian Return Centre (PRC) hosted the event, a group which four days ago courted controversy by organising a House of Lords event demanding Britain apologise for a pledge made by Arthur Balfour in 1917 which supported the establishment of a Jewish state.

Israel has claimed that the organisation is affiliated to Hamas, a designated terrorist group, but the PRC says it denounces antisemitism.

Politicians on the trip met President Assad, who is responsible for the displacement and killing of millions of Syrians during the ongoing civil war in the Middle Eastern nation.

Mr Corbyn wrote about the event in communist Morning Star newspaper, saying it marked the anniversary of the date “when Arthur Balfour gave his infamous declaration of support for a Jewish state of Israel”.

He went on to claim Hillary Clinton’s failure to back Palestinian settlements, something she announced while secretary of state, showed Israeli bias in American politics.

He blasted: “Once again the Israeli tail wags the US dog as Hillary Clinton drops demands to even halt new settlements as the Netanyahu government pushes to continue its dismemberment of the West Bank.”

Mr Corbyn spoke about his experiences of the trip in the Commons, saying: “I pay tribute to the fact that Syria has accommodated a very large number of refugees and ensured that they are able to live in that country in safety.”

A Labour Party spokesman said: “Jeremy has consistently spoken out against all forms of antisemitism.

“In his speech to Labour Party conference this year, he said: ‘Let me be absolutely clear: antisemitism is an evil.

“‘It led to the worst crimes of the 20th century, every one of us has a responsibility to ensure that it is never allowed to fester in our society again.”


500th Anniversary of Reformation Would be ‘Perfect Time’ for Protestants to Apologize for Luther’s Antisemitism, US Jewish Official Says The Rothschild Libel: Why has it taken 200 years for an anti-Semitic slur that emerged from the Battle of Waterloo to be dismissed?