Palestinian Authority schools use plays to teach murder and hate 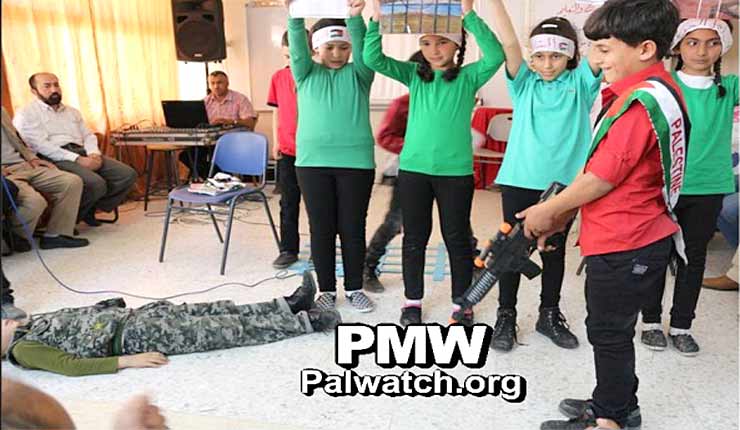 A recent play at a PA high school for boys reinforced the PA libel that Israel fabricated the many recent stabbing attacks by Palestinians by planting knives near innocent Palestinians who were then shot and killed by Israelis for no reason. At the Tuqu’ High School for Boys, which is part of the Bethlehem Education Directorate under the PA Ministry of Education, this libel was reinforced by depicting Israeli soldiers as cold-blooded murderers in a school play.

In the play performed in front of hundreds of high school students, actors portray Israeli soldiers arresting a Palestinian youth. The soldiers make the Palestinian kneel and lie on the ground, then they plant a knife next to him to frame him as a stabber, and finally shoot him in cold blood. Other actors portray Palestinians carrying away the “Martyr’s” body. [Official Facebook page of Tuqu’ Municipality (PA), May 11, 2016]

In another example of PA education, young Palestinian children “executed” an Israeli soldier in a play at an art exhibition at the Al-Surra Elementary School for Boys and Girls, which is part of the Hebron Education Directorate under the PA Ministry of Education.

A photo from the exhibition posted on the Al-Surra Elementary School’s Facebook page show a Palestinian boy wearing a ribbon with the Palestinian flag and the word “Palestine” on it. The boy is preparing to “execute” another child dressed as an Israeli soldier. He points a toy M16 rifle at the Israeli soldier, who kneels with his arms raised in surrender. A second photo shows “the Israeli soldier” lying on the ground after being “executed” by the smiling Palestinian child.

A report in the Palestinian daily Al-Ayyam described the exhibition at the Al-Surra Elementary School, south of Hebron, as “a cultural art exhibition… for Palestinian Prisoner’s Day.” [Al-Ayyam, April 21, 2016]

The way the Palestinian Authority educates its children will determine if there can be peace in the future. PA Chairman Mahmoud Abbas repeatedly professes to foreign audiences his desire for peace between Israel and a Palestinian state living side by side. However, with the prevalence of this type of hate and terror promotion, PA schools themselves are a great impediment to peace.

The following is an excerpt of the article reporting on the art exhibition that included a play in which Palestinians execute an Israeli soldier:

Headline: “Cultural art exhibition to mark Prisoner’s Day in the Al-Surra School in southern Hebron”
“A cultural art exhibition was opened yesterday [April 20, 2016] in the mixed [boys/girls] elementary school of [the village] Al-Surra, south of Hebron, for Palestinian Prisoner’s Day. The exhibition included many sections, the most notable of which was a handicrafts section created by prisoners inside the [Israeli] prisons, a cartoon section about the international failure to protect the prisoners, and [the display] Graves of the Living (the prisons) [parentheses in source]. Likewise, the exhibition included pictures of the district’s prisoners with life sentences, and pictures of child prisoners and female prisoners. A delegation from the [PLO] Commission of Prisoners’ and Released Prisoners’ Affairs visited the exhibition together with a number of released prisoners. Director of the commission in Hebron Ibrahim Najajreh praised this magnificent artistic cultural activity, which includes many references to the prisoners’ cause and to the daily actions and violations that the Israeli occupation carries out against them.”
[Al-Ayyam, April 21, 2016]


The Islamization of France in 2015 Germany-Based Syrian Activist Malik Fndy, Previously Arrested For Posting Pro-ISIS Videos, Calls On Like-Minded Activists To Take To The Media In Support Of ISIS In Mosul