UNESCO had help from Israeli NGOs and their Funders 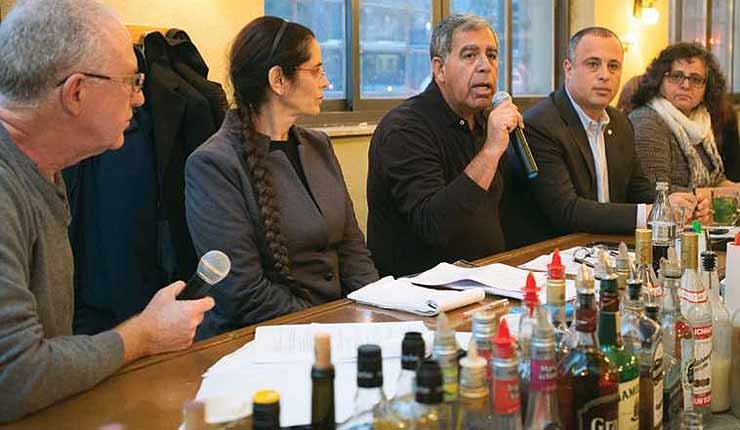 UNESCO (United Nations Educational Scientific and Cultural Organization), whose motto is “Building peace in the minds of men and women,” recently committed a heinous crime — or to be entirely accurate, two crimes — against the Jewish people. In attacks seeking to erase Jewish history in Jerusalem, as part of the narrative war, the UN perpetrated the equivalent of the wanton desecration committed by the Taliban and ISIS in their unholy crusades. UNESCO also claimed that Jewish visitors were “storming” the Temple Mount; and the October 12 resolution also refers to the Western Wall Plaza (a central place for Jewish prayer for centuries) as the “Al Buraq Plaza.”

In committing these crimes, the Palestinians and Jordanian governments that led the efforts, and the member states in the different UNESCO frameworks (including EU-members Finland, Poland and Portugal, which abstained, allowing the resolutions to pass) did not act alone.

For years, some of the non-governmental organizations (NGOs) in the network that demonizes Israel with false claims of “war crimes” have also targeted the Jewish history of Jerusalem. In their publications, parliamentary appearances around the world, UN submissions, and “guided tours” of Jerusalem for foreign diplomats and journalists, these groups repeat Palestinian accusations that Israel is guilty of the “Judaization of Jerusalem” and propagate the incendiary myth that “Al-Aqsa is in danger”, while ignoring Palestinian attacks against Jewish visitors to the Temple Mount and systematic efforts to destroy archeological evidence of Jewish ties.

In May 2016, for example, the NGO known as Ir Amim (the City of the Nations) published a report jointly with Peace Now, which included the accusation that the objective of Israel’s policy “is to Judaize the Old City basin — in the Muslim Quarter…and surrounding neighborhoods.” On Twitter, Ir Amim also attempted to spin and whitewash the UNESCO attacks, absurdly claiming that the focus was “NOT Jewish connection to Temple Mt but ISR’s duties under intnl law to protect status quo.”

The campaign has been taking aim at Jewish history in the Holy City for many years, echoed in the international media and picked up by government officials, members of parliaments, and others. In 2010, Danny Seidemann, the founder of the Israeli NGO Terrestrial Jerusalem, (he had earlier been a leader of Ir Amim before a falling out), published an article in the American journal Foreign Policy headlined “East Jerusalem settlers and Israel’s never-ending War of Independence”. Seidemann has close links to UN, European and other officials who are inclined to accept the Arab version of history (to understate the case), and in this article he declared that Israel’s policies in Jerusalem “contribut[e] to the transformation of a resolvable national-political conflict into an intractable mix of jihad, war of mitzvah, and Armageddon — a religious war driven by the Biblical imagery.” Nothing less. At the same time, article erased the complexities of Jerusalem realities — including large-scale illegal building and crime in Palestinian neighborhoods, damage to the Temple Mount as a result of unauthorized excavation by the Waqf (the Moslem religious authority), and incitement to violence and murder against Jews.

Yet another example is found in the activities of Emek Shaveh (“an organization of archaeologists and community activists”), which, although condemning the UNESCO resolutions, makes claims that archeological excavations are “lending force to an historical narrative focusing on the Jewish people, and marginalizing the Palestinian[s] …from their connection to the Temple Mount/al-Haram a-Sharif.” Emek Shaveh omits the extensive Waqf destruction and desecration of historically significant finds from the Temple Mount, which physically erases Jewish history and gives credence to the UNESCO narrative. In a 2014 interview immediately after the Gaza war, an official of Emek Shaveh absurdly referred to archeological excavation in Jerusalem as “much more dangerous than the story of the Hamas tunnels,” which are used for terror attacks.

In these attacks, the NGO funders are also enablers and share major responsibility for the UNESCO Jerusalem travesty. As shown in NGO Monitor research, the majority of the budgets of each of the three groups is provided by European governments, in some cases directly and others, via funds to radical church and political groups. Ir Amim gets about two-thirds of its money from Europe including Sweden, Norway, the European Union,  Germany. And 90% of Terrestrial Jerusalem has come from the governments (and taxpayers, although they were not consulted) ofthe UK, Norway, and Switzerland, and Sweden). Similarly, Emek Shaveh NGO (funded by the Swiss Foreign Ministry, Cordaid (Netherlands), Norway, Ireland, a French group, Oxfam GB and Oxfam Novib (Netherlands) also gets 90% of its funds from these governments.

Not coincidentally, the three “Jerusalem” NGOs are also part of the New Israel Fund’s network. The NIF, which is based in the U.S. and is not registered with the Israel Non-Profit Authority, provided seed money and coordination for its wide political network, which also includes B’Tselem, Breaking the Silence, Adalah, the +972 blog (that published the Emek Shaveh interview quoted above) and others. The NIF receives most of its $30 million annual budget from private foundations and individuals, although their Shatil project in Israel inexplicably also gets European Union grants. And, as in the case of Ir Amim, Terrestrial Jerusalem, Emek Shaveh and the rest, the NIF seed money is followed by much larger European government funding.

To counter the role of NGOs in the vicious Jerusalem propaganda wars, (the UNESCO resolutions are far from the end), as in the other dimensions of NGO demonization of Israel, confronting the European governments that are their funder/enablers is central. Emotional attacks from Israeli politicians on the NGOs or the individuals who run them are not the way to go, but rather, a consistent and effective strategy that “follows the money” is necessary.


Germany-Based Syrian Activist Malik Fndy, Previously Arrested For Posting Pro-ISIS Videos, Calls On Like-Minded Activists To Take To The Media In Support Of ISIS In Mosul Parents face court after refusing to let son go on school trip to mosque