UK baroness quits party that suspended her over anti-Israel rhetoric 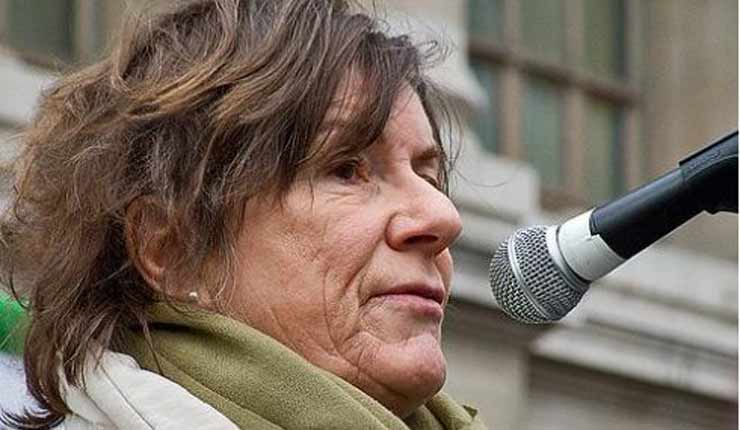 British lawmaker Jenny Tonge said she left her Liberal Democrat party hours after her suspension from it amid an outcry over her latest anti-Israel rhetoric.

The party suspended Tonge, who serves in the upper house of the Parliament, on Thursday after she hosted an event earlier this week at the House of Lords that featured critical observations about the Balfour Declaration of 1917, in which the United Kingdom committed to viewing favorably the establishment of a Jewish national home in what would later become the British Mandate on Palestine.

At the meeting, one member of the audience won applause for claiming that Jews were to blame for the Holocaust and comparing Israel to the Islamic State group.

Tonge, who sits as an independent peer in the Lords after resigning from the party parliamentary group over anti-Israel comments in 2012, chaired the meeting organized by the Palestinian Return Centre.

“The party has suspended the membership of Jenny Tonge. We take her comments very seriously and have acted accordingly,” The Daily Telegraph quoted a party spokesperson as saying. The Guardian quoted Tonge as saying she quit at “about the same time” as her suspension.

In July, Tonge, who has hosted and participated in many anti-Israel events, said that “the treatment of the Palestinians by Israel is a major cause of the rise of extreme Islamism and Daesh,” using the Arab-language acronym of the Islamic State terrorist organization.

Tonge resigned in 2012 from the position of party whip, a task equivalent in the United States to speaker, after she spoke about Israel’s demise at an event promoting boycotts of the Jewish state. She lists her party, which has eight seats among the 650 in the House of Commons, the British lower house, and 104 out of 813 in the upper house, the House of Lords, as “independent Liberal Democrat.”

“Beware Israel. Israel is not going to be there forever in its present form,” she said at the time. “One day, the American people are going to say to the Israel lobby in the USA: Enough is enough. Israel will lose support and then they will reap what they have sown.”

The Board of Deputies of British Jews, which has called repeatedly for Tonge’s dismissal, welcomed her suspension.

“She is a repeat offender, propagating the worst anti-Semitic tropes over and over again,” Jonathan Arkush, the board’s president, said in a statement.

Gideon Falter, the chairman of the Campaign Against Antisemitism charity, also called the suspension a step in the right direction.

“Baroness Tonge specializes in baiting Jews,” Falter said, “and her ongoing membership in the House of Lords and the Liberal Democrats is a disgrace to both institutions.”

Earlier, the Zionist Federation of Great Britain said that the measure against Tonge “highlights the sheer nastiness of the ‘human rights’ meeting” she attended.

“For years these events have been going on, existing as echo chambers where speakers seem to compete with each other as to who can say the most ignorant, grotesque and offensive statements about Israel,” the statement said.

The Israeli embassy in London said in response to the suspension only that “Anti-Semitism should never be tolerated.”

The comments at the meeting, which was live streamed on Facebook by the Palestinian Return Centre, were raised in the House of Commons on Thursday.

Welsh Conservative MP David Davies brought up the issue, asking the Leader of the House David Lidington: “May we have a debate on the use to which these premises may be put following reports that outrageously a member of the House of Lords presided over an event at which Israel was compared to Islamic State, and the Jews were even blamed for their own genocide?”

Davies continued: “Could we discuss this and also whether we should be issuing an apology for these outrageous comments to the Israeli government and the Jewish people.”

Lidington said in response that he was “genuinely horrified” by the comments at the meeting, and that “we should all be very concerned about what happened there.”

The leader also expressed the hope that Lib Dem chief Tim Farron “does launch an immediate and thorough investigation so we can get to the truth and any appropriate disciplinary action can be taken.”

Farron on Tuesday told London’s LBC radio that the comments by Tonge were “intolerable” and that action had been taken, although he could not specify what that action was.

A party spokesperson told the Jewish News that “Tonge does not take the party whip [does not accept party discipline] in the House of Lords and does not speak for the Liberal Democrats on Middle East issues.”