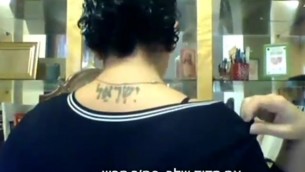 Ramallah-born Sandra Solomon, a convert to Christianity, says her dream is to one day come to Israel, fly the flag and salute it

The niece of a top official in the Palestinian Fatah party and a close confidant of the late leader Yasser Arafat says she loves the State of Israel so much, she had the word “Israel” in Hebrew tattooed across her shoulder blades.

Sandra Solomon, 38, was born a Muslim in Ramallah under a different name, but grew up in Saudi Arabia before moving to Canada where she converted to Christianity.

Solomon said she is the niece of Saher Habash, one of the founders of the Fatah party, a member of its Central Committee and a leader of the Second Intifada.

“I grew up in a home that hated the Jews, hailed Hitler and praised the Holocaust,” she told Channel 2 in an interview Wednesday.

She has another tattoo on her arm of the word “Jesus” in Hebrew, above a menorah.Solomon, who wears a pendant of the Star of David around her neck, and has since become an advocate for Israel, said she hoped the Jewish people would forgive her for the insults and the demonization they underwent in her home and in her surroundings growing up.

Her family has denounced her for converting, she said, which “didn’t come overnight” and was mainly driven by her upbringing in Saudi Arabia.

Solomon said her “dream, one day, is to come to Israel, to fly the flag and salute it.”“The [forced wearing of the] hijab is the main reason I left Islam…and also because of the way of life under Islamic Sharia law,” she told Channel 2.

“The State of Israel was created not to be erased but to stay,” she added in the interview.

Solomon said that were her uncle alive, he would have surely incited against her for her actions and her advocacy for Israel, as have other Muslims and Palestinians.

“I stand behind what I say and I will tell the truth even if it leads to my death one day. I will at least know that I’ve had the honor to die for the truth,” she said.