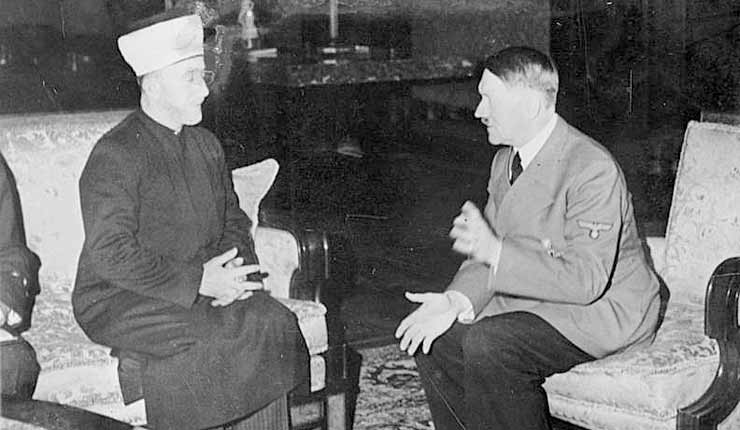 It’s no coincidence that just a few months after Nazi Germany surrendered, on November 2, 1945, the anniversary of the Balfour Declaration, many synagogues were burned down in Egypt and dozens of Jews were killed on the streets of Cairo.

On November 5, 1941, the grand mufti of Jerusalem, Haj Amin al-Husseini, arrived in Berlin. He was fleeing Iraq following the failure of the coup he was involved in there, and three weeks later he met with Adolf Hitler. The meeting took place despite Nazi Germany’s entanglement in Operation Barbarossa and the war against Russia.

The Nazis appointed the mufti “Das Arabische Buro Der Grossmufti” of Berlin and gave him a monthly allowance of tens of thousands of dollars a month. He was instructed to hire dozens of assistants, each of whom also received a salary directly from the Third Reich. Among the individuals with whom he worked closely during his time in Berlin was Hassan Salameh – the father of the Palestinian terrorist Ali Salameh (aka “the Red Prince”), one of the perpetrators of the 1972 Munich Olympics massacre of Israeli athletes.

In his new position, the mufti was placed in charge of the Nazi’s Arabic-language radio station, that broadcast anti-Semitic propaganda in Arabic from 1939 until the Nazi party collapsed in 1945. This radio station was highly popular and could be heard throughout the Middle East. The mufti was also responsible for disseminating written Nazi propaganda in Arabic designed to encourage protests against British and French occupation.

The mufti lived in Germany until May 1945, when the Second World War came to an end. Throughout this entire period, the mufti was involved in espionage, sabotage, terrorist activity against the British and the Jews, as well as anti-Semitic propaganda.

As part of his alleged struggle for independence for the Palestinian people, the mufti attempted to prevent the arrival of European Jews to Palestine, as well as the establishment of a national Jewish homeland in the Land of Israel. At least that’s what he claimed in his memoirs.

But this is far from the truth. In actuality, the mufti was constantly engaged in the deportation and extermination of Jews from Arab countries and from Palestine.

I recently discovered documents that attest to the depth of the Arab world’s animosity toward the Jews and how the Arabs incited against the Jews and spread propaganda. Many people have asked just how closely the mufti identified conceptually and practically to the Nazi approach regarding the extermination of the Jewish people.

There are recordings of the mufti broadcasting from Berlin to the Arab world in Arabic, in which he says, “Kill the Jews wherever you find them – this is God’s will.”

On November 2, 1943 – the anniversary of the Balfour Declaration – the mufti organized a protest in Berlin in which thousands of Muslim immigrants to Germany participated. The following is an excerpt from the speech the mufti gave at the protest: “26 years ago the Jews received the Balfour Declaration so they could build a national Jewish homeland. The British betrayed the Arabs and Islam by supporting the Jews. Jews are selfish.

They think they are the chosen people and that all the other people of the world are meant to serve them. The Jews are the enemy of Islam – they are the ones killed the prophet Mohammad!” The Mufti continues, “The Jewish British minister [Benjamin] Disraeli bought the Suez Canal, thus paving the way for the British to conquer Egypt. And Algerian Jews helped France occupy Algeria. …The Arabs – and especially the Muslims – must expel the Jews from Arab countries.

This is the ultimate solution.

The prophet Mohammad used this solution 1,300 years ago.

“The Treaty of Versailles was a disaster for Germany and for the Arabs, but the Germans know how to get rid of the Jews, and this is why the Arab world has such close relations with Germany.

Germany never harmed the Muslims and is fighting against our common enemy – the Jews.

The most important thing is that they have found the final solution to the Jewish problem. Time is working against the Jews even though the Allies are helping them.”

According to the mufti’s memoirs, he was aware of the Final Solution already in the summer of 1943.

On March 19, 1943, the mufti made a speech from the Islamic Mosque in Berlin in honor of the prophet Mohammad’s birthday, during which he said, “The Jews have managed to use their influence to control the British and the Americans. This is proven by the recent passing of a bill in Congress allowing the Jews to build a national homeland in Palestine.

“The Jews took advantage of the previous war to settle in the Holy Land. The Jews are a threat not just in Palestine, but in every Arab country, since this is where the Allies plan to resettle the millions of Jews who were expelled from Europe. The Arabs must fight with all their strength to put an end to this plot.”

From the above, we can clearly conclude that the mufti was aware of the Final Solution and the plan to exterminate the Jewish people in Europe from the beginning of the war. There is also documentation showing that the mufti toured concentration camps in Poland with Heinrich Himmler. Killing European Jews was not good enough for the mufti, though, and so he planned to kill all the Jews in the Arab world and in Palestine. While the mufti publicly called for Arab countries to expel Jews living in them, he secretly planned to build extermination camps for Jews from Arab countries and Palestine, so that he could implement the Final Solution in the Middle East.

Haviv Kanaan, who was a researcher, journalist and police commander during the British Mandate, wrote many books about Nazi propaganda. After he retired from the Police, Kanaan began working as a journalist for Haaretz and researching the construction of the concentration camps in Palestine and uncovered the mufti’s plan to build incinerators in the Dotan Valley. Kanaan based his conclusion on the testimony of Faiz Bay Idrisi, who was a senior Arab officer in the Mandate Police and a Jerusalem area district commander.

Idrisi is quoted as saying, “Chills go through my body even today as I recall what I heard back then from police officials and mufti supporters [when General Field Marshal Erwin Rommel was about to enter Egypt as part of the 1942 El Alamein campaign].

Haj Amin Husseini was preparing to enter Jerusalem at the head of the Muslim Arab Legion squadron he’d created for the army of the Third Reich. The mufti’s grand plan was to build huge Auschwitz- like crematoria near Nablus, to which Jews from Palestine, Iraq, Egypt, Yemen, Syria, Lebanon and North Africa would be sent and then be gassed, just like the Jews were by the SS in Europe.”

Kanaan also tells how once, when he was carrying out his research, he met a retired German diplomat who had refused to join the Nazi Party. He told Kanaan, “I cannot say with certainty what lay in store for the Jews living in the Land of Israel, but I do know that their entire existence would have been at stake had Rommel succeeded in conquering the Middle East.”

Kanaan’s full-length study was published in Haaretz on March 2, 1970. Kanaan wrote a book about the El Alamein campaign called 200 days of fear – the Land of Israel against Rommel’s Army, in which he describes how the Jews in Palestine prepared for a possible Nazi attack from Egypt.

To collect information about the mufti’s plans, Kanaan traveled to Germany where he met with officials who were knowledgeable about them. In fact, after the defeat in the summer of 1942 at El Alamein as well as on other fronts, the mufti realized that the Third Reich’s days were numbered, and so he prepared another plan: conquest of the Middle East by the Nazi army, whose first order of business would be the annihilation of the 250,000 Jews in Tel Aviv. The mufti believed that the extermination of the Jews would stimulate the Arabs in Palestine and Egypt to revolt against the British and carry out a jihad (holy war).

These holy warriors would release the Arabs from tyranny of British and French colonialism.

Kanaan uncovered proof that the Germans invested heavily in this program and even established spy networks throughout the Arab world. Kanaan describes how senior German officials such as Heinrich Himmler and Hermann Goering took part in these discussions, although Hitler himself was never involved. The fact that most Arab countries were pro-British made it quite difficult to implement this program, and then the Third Reich began to collapse on all fronts, making it practically impossible.

It’s no coincidence that just a few months after Nazi Germany surrendered, on November 2, 1945, the anniversary of the Balfour Declaration, many synagogues were burned down in Egypt and dozens of Jews were killed on the streets of Cairo.

And it was also no coincidence that on that same day, hundreds of Jews in Libya were killed, nine synagogues were desecrated, and hundreds of Jewish homes and shops were looted and burned down. There is no doubt that these attacks on Egyptian and Libyan Jews, which took place exactly on the anniversary of the Balfour Declaration, were the result of the mufti’s machinations and his influence on leaders of the Arab world. These events were the direct consequence of propaganda the mufti had been circulating for years. Generations of Muslims, including the Salameh family, were being raised on such beliefs. The mufti’s actions had prepared the ground for attacks on Jews in Egypt, Iraq, Syria and Lebanon.

A plan to compensate Jews who escaped from Arab countries due to harassment and persecution is currently being discussed in the Knesset and in coordination with the US government. It’s important that Israeli politicians not only understand the historical background that led up to the displacement of Jews from Arab counties, but also the direct connection between their fate and what the Palestinians call the Nakba.


India, the UN vote, the Temple Mount and Ayodhya No Justice in the Netherlands

One thought on “The Grand Mufti’s Nazi connection”