No Justice in the Netherlands 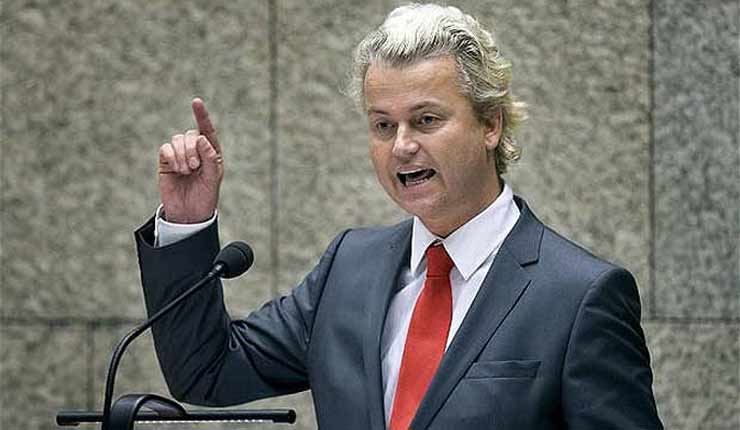 A court in The Hague decided on October 14 that the charges of hate speech against Dutch politician Geert Wilders, for statements he made in March 2014 at a political rally, are admissible in a court of law. It thereby rejected the Wilders’ appeal to throw out the charges as inadmissible in a court of law on the grounds that these are political issues and that a trial would in fact amount to a political process. The criminal trial against Wilders will begin on Monday, October 31.

Wilders’ defense attorney, Geert Jan Knoops, has argued that the trial amounts to a political trial against Wilders and his party, the PVV: “Sensitive issues must be judged by public opinion or through the ballot box,”, Knoops said “The Prosecutor is indirectly asking for a ruling over the functioning of the PVV and its political program. The court must not interfere with this.”Because of the “fewer Moroccans” statements, repeated again in an interview a few days later, Wilders will be prosecuted on two counts: First for “deliberately insulting a group of people because of their race.” Second, for “inciting hatred or discrimination against these people.”

As a politician, Wilders can say more than an ordinary citizen, Knoops said, arguing that Wilders used his statements to point out shortcomings in the Dutch state. “It is his duty to name shortcomings. He takes that responsibility and proposes solutions.” Knoops argued that the prosecutor is limiting Wilders’ freedom of speech by prosecuting him for his statements.

The court’s response was that although politicians are entitled to freedom of expression, they should “avoid public statements that feed intolerance” and that the trial would determine where the border lies between politicians’ freedom of expression and their obligation, as the court sees it, to avoid public statements that feed intolerance.

Other politicians, notably all from the Labour Party, have uttered the following about Moroccans without being prosecuted:

The court discarded Wilders’ defense attorney’s argument that the failure to prosecute any of these politicians renders the trial against Wilders discriminatory. The court said that because of the different time, place and context of the statements of other politicians, they cannot be equated with the statements of Mr. Wilders and for that reason, the court considers that there has been no infringement of the principle of equality.

The statements of those other politicians, however, were, objectively speaking, far worse in their use of language (“sh*t Moroccans”) and what could be considered direct incitement (“We must humiliate Moroccans”). What other time, place and context could possibly make the above statements more acceptable than asking whether voters would like more or fewer Moroccans? And what circumstances render it legitimate to call someone “sh*t” because of their ethnic origin?

It is deeply troubling that the court already in its preliminary ruling, and before the criminal trial itself has even begun, so obviously compromises its own impartiality and objectivity. To the outside world, this court no longer appears impartial. Are other European courts also quietly submitting to jihadist values of curtailing free speech and “inconvenient” political views?

1. Everyone has the right to freedom of expression. This right shall include freedom to hold opinions and to receive and impart information and ideas without interference by public authority and regardless of frontiers…

2. The exercise of these freedoms, since it carries with it duties and responsibilities, may be subject to such formalities, conditions, restrictions or penalties as are prescribed by law and are necessary in a democratic society, in the interests of national security, territorial integrity or public safety, for the prevention of disorder or crime, for the protection of health or morals, for the protection of the reputation or rights of others, for preventing the disclosure of information received in confidence, or for maintaining the authority and impartiality of the judiciary.

In its case law, the European Court of Human Rights has stated[1] that Article 10

“…protects not only the information or ideas that are regarded as inoffensive but also those that offend, shock or disturb; such are the demands of that pluralism, tolerance and broad-mindedness without which there is no democratic society. Opinions expressed in strong or exaggerated language are also protected”.

Even more important in the context of the trial against Wilders is the fact that according to the European Court of Human Rights’ case law,

“…the extent of protection depends on the context and the aim of the criticism. In matters of public controversy or public interest, during political debate, in electoral campaigns… strong words and harsh criticism may be expected and will be tolerated to a greater degree by the Court”. [emphasis added]

Let us review what Wilders said and the context in which he said it: “Do you want more or fewer Moroccans?” After the crowd responded “fewer” Wilders said, “We’re going to organize that.” He repeated that statement in a subsequent interview, where he said, “The fewer Moroccans, the better.”

The context in which he said it was an election campaign in March 2014 against the backdrop of considerable problems with Moroccans in the Netherlands. According to Dutch journalist Timon Dias:

Wilders emphasizes the inordinate costs associated with the disproportionately high number of Dutch Moroccans registered as social welfare beneficiaries and who are implicated in welfare fraud.

Now, if you are a politician and concerned about the future welfare of your country, you should, logically, be able to discuss the pertinent issues of the day, including existing problems with immigrants and other population groups. This discussion will only make sense in a democratic society if it takes place in public, and certainly with voters at a political rally during an election campaign. Asking whether voters want fewer Moroccans in their city or country may seem crude to some and offensive to others. However, in the light of the case law of the European Human Rights Court, which specifically protects political speech with a very wide margin, especially that of political actors and political campaigns, it is very difficult to see, if not impossible, how the question Wilders posed could legitimately be covered by article 10 (2).

According to article 10 (2), freedom of speech can be limited when

“necessary in a democratic society, in the interests of national security, territorial integrity or public safety, for the prevention of disorder or crime, for the protection of health or morals, for the protection of the reputation or rights of others, for preventing the disclosure of information received in confidence, or for maintaining the authority and impartiality of the judiciary.”

Wilders did not incite to violence or prosecution (or humiliation), nor did he jeopardize national security or public safety or any of the other concerns noted above.

It is more difficult to see how the statement, “We must humiliate Moroccans” by Labour politician Hans Spekman, who was not prosecuted, could be legitimized, as it constitutes direct incitement to some form of humiliating action towards Moroccans. Then again, Hans Spekman is not Geert Wilders.

Clearly, in the Netherlands, justice is no longer blind and the courts no are longer independent and impartial state institutions. This should deeply concern all Dutch citizens.

Judith Bergman is a writer, columnist, lawyer and political analyst.