Jews and Christians Rejoicing Over the Sukkot Holiday Drowned Out the Foolish, Futile UNESCO Resolution 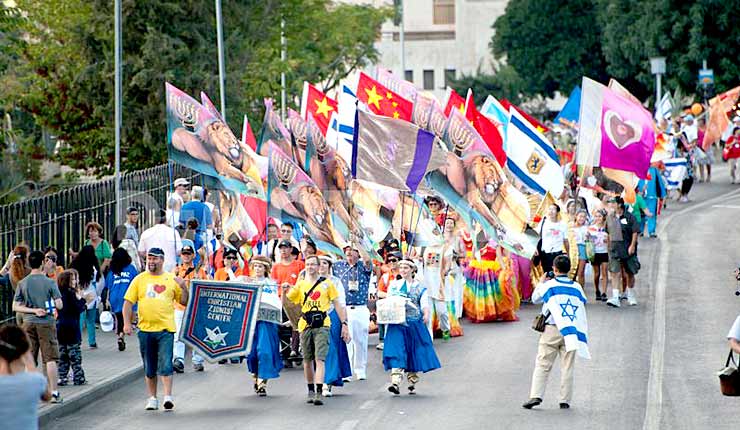 UNESCO chose a rather odd time to ratify its resolution against Israel’s “occupation of Al-Aqsa Mosque/Al-Haram Al-Sharif” and Jerusalem’s Old City.

The declaration, which was initially submitted by Algeria, Egypt, Lebanon, Morocco, Oman, Qatar and Sudan, officially claims those sites as part of the “Cultural Heritage of Palestine.” In doing so, it disavows Jerusalem’s historical and religious connection with both Judaism and Christianity.

The Resolution was passed on Tuesday, October 18 during the week of Sukkot, one of three great Jewish Feasts that have for at least 3,000 years beckoned pilgrims to Jerusalem.

And in recent years, Sukkot – the Feast of Tabernacles – has also drawn thousands of Christians to the Holy City.

And so it was that this year, while the Israeli media bemoaned the UNESCO resolution, Jerusalem’s streets throbbed with singing, laughter and rejoicing.

The irony was unavoidable. Joyful festivities, celebrated in real time, loudly and cheerfully drowned out the abstract words of the resolution.

During the feast, family gardens, terraces, verandas as well as plazas and eateries are, for the week, enclosed in fabric walls and roofed with palm branches and other greenery. These “booths” remind the Jewish people of their desert trek from Egypt to the Promised Land. Such fragile, temporary shelters are meant to recall the need for dependency on God, and his deliverance from evil powers.

As a Christian sojourner, I’ve lived in Jerusalem for 10 years. And I’ve become increasingly aware of how deeply the roots of my own Christian faith are anchored in the ancient soil of Judaism.

Like many Christians, from time to time I visit what is sometimes called the “Wailing Wall,” where Jews wept for centuries over the loss of their land. Today, believers of myriad traditions fold scribbled prayers into the cracks and crannies of the wall’s surface, sensing that somehow that God seems a little closer, a little more attuned.

One can only wonder how an organization like UNESCO – recognized as a global guardian of the world’s most precious heritage sites – is able look upon the massive, archeologically acclaimed Herodian stones of the Jewish Temple’s Western Wall, blatantly deny their history, and solemnly declare it a solely Muslim site.

Groups of Israelis and foreign Jewish visitors also make their way to the Temple Mount (despite stringently enforced and brief hours of admittance). They are forbidden to carry Bibles or prayer books, sing or even move their lips in prayer. They find this appalling.

And they aren’t the only ones.

Christian tourists also visit the Temple Mount, equally scrutinized lest they demonstrate the least indication of obvious worship. One of my friends’ Bible was confiscated from her backpack by guards at the security checkpoint. It was never returned to her.

Of course, Christian tourists also visit the Western Wall by the tens of thousands to sing, pray and marvel at the sight of a Bible story come to life before their eyes. They’ve toured Bethlehem and Nazareth and the Sea of Galilee. And now they stand praying in the shadow of what was once the Temple of God.

UNESCO’s resolution is infuriating to Israelis, not only because of its historical, archeological and political deceit, but also because it attempts to seize Judaism’s holiest geography.

Less has been said about our Christian heritage and its scandalous denial, but it is equally undisputable. For starters, there is ample archeological evidence of a pre-Islamic Christian basilica buried beneath the Al-Aqsa’ Mosque’s present structure. Mosaic tiles continue to be unearthed.

But even more compelling are the biblical accounts of Jesus, recording his own visits to the Jewish Temple.

He was carried there as an infant to be consecrated to God. At 12, he was “found… in the Temple courts, sitting among the teachers and asking them questions.” Other notable visits involved his expulsion of money-changers, and his grim predictions of the Temple’s destruction.

And this year, there is even greater irony. Because it was during Sukkot – the Feast of Tabernacles – when Jesus went “up to the temple courts and began to teach” (John 7). He declared – probably during a traditional Sukkot water ritual – “If anyone is thirsty, let him come to me and drink…” The temple guards took note of him saying, “No one ever spoke the way this man does.”

Attempts to de-Judaize – and thus de-Christianize – Jerusalem and the rest of Israel seem to have begun in earnest in 2000 at Camp David, when PLO chief Yasser Arafat famously informed US President Bill Clinton that there was never a Jewish Temple on the Temple Mount.  This latest UNESCO resolution is simply a continuation of that mythology.

Meanwhile, as Jews and Christians complete the celebration of Sukkot, the ongoing strategy to remove their history, faith and heritage remains rather absurd. And, judging by the sounds of singing, laughter and rejoicing, its foolishness is only exceeded by it futility.


Not Shocking: George Soros Funds Progressive War on Israel In Response to Brandeis Report on Campus Antisemitism, Major Groups Say Students More Willing, Prepared Than Ever to Fight Back

One thought on “Jews and Christians Rejoicing Over the Sukkot Holiday Drowned Out the Foolish, Futile UNESCO Resolution”