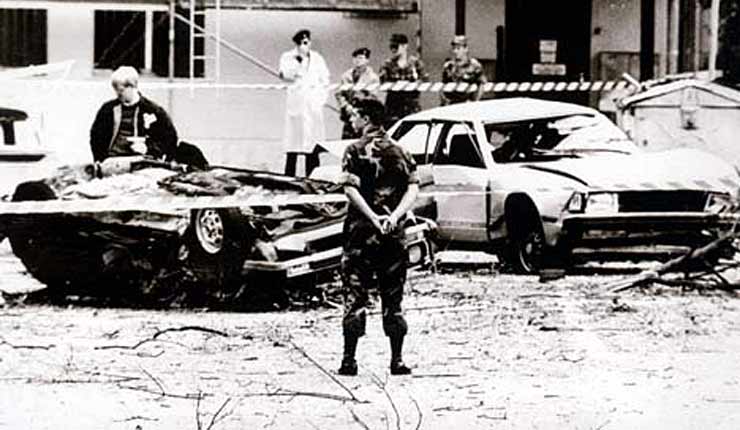 Communists in the east and leftists in the west were active enemies of the Jewish state.

The historian Jeffrey Herf’s profound new book shows that German-animated left-wing terrorism targeting Israel was not a tactic but rather part of a long-war strategy to destroy the Jewish state. Academic study and journalism on the now-defunct East German Communist state and radical West German groups hitherto failed to delve into their ongoing war against Israel (and against the United States, one could argue).

Undeclared Wars with Israel: East Germany and the West German Far Left 1967-1989 is the title of Herf’s monumental study. To understand the German Democratic Republic, one must understand its opposition to the founding philosophy of the Jewish state, namely, Zionism. “The East German dictatorship was a different kind of dictatorship from its Nazi predecessor, but, albeit for different reasons, it became the second dictatorship to regard Zionism as an enemy,” writes Herf.

Herf repeatedly dissects the great irony in the empty anti-fascist rhetoric of the GDR and radical West Germans. The regime’s leaders, many of whom fought the Hitler movement, internalized the lethal anti-Semitism of the Nazis, which led inexorably to their desire to dismantle Israel. The GDR brings to mind the playwright Bertolt Brecht’s famous line—”The womb he crawled from is still going strong.”

Herf supplies exhaustive evidence of the GDR’s secret military deliveries to Israel’s enemies in the Middle East—including the bellicose Hafez al-Assad regime in Syria, which was a strategic partner for East Germany.

Take the example of the period 1970-1974, in which “East Germany delivered approximately 580,000 Kalashnikov assault weapons and machine guns to the armed forces of Egypt, and Syria, repaired and serviced about 125 of their MiG fighter jets and delivered millions of bullets, many thousands of rocket-propelled anti-tank grenades and land mines, and millions of cartridges.”

Herf burrowed deep into German archives to obtain information about the GDR’s state-sponsored terrorism. His treatment of East Germany’s powerful defense minister General Heinz Hoffmann neatly captures the alliance of GDR-style Stalinism with the Middle East dictators in the early 1970s. Hoffmann spoke to his Iraqi interlocutors of “The commonalities of our struggle against imperialism and Zionism.”

One of Herf’s many novel contributions to fathoming the GDR’s state-sponsored terrorism is his framework: He terms it “East Germany’s Eurocentric definition of counterterrorism.” One element in this definition was a quid pro quo policy with regard to Palestinian terrorist organizations. The GDR supplied weapons and sophisticated training to the Palestinians in exchange for them refraining from carrying out terrorist attacks in Western Europe. In other words, the GDR largely subcontracted its war against the Jews to the Arabs in the Middle East.

Nevertheless, the East Germans, wittingly or unwittingly, allowed the Libyans to bomb La Belle, a West Berlin discotheque, in 1986, killing three people, including two U.S. soldiers, and injuring 229 others, including 79 U.S. service personnel. A concrete link between the Palestinian Black September group and the murder of 11 Israeli sportsmen and a German police office at the Munich Olympics in 1972 cannot be established based on the archival material. However, Stasi officials and other GDR personnel destroyed great volumes of documents when the Berlin Wall collapsed in 1989.

The West German far-leftist Ulrike Meinhof—perhaps the most famous German terrorist at the time—of the Baader Meinhof terrorist group—was euphoric about the massacre of Israelis. Herf described her essay celebrating the murders of Israeli athletes as “one of the most important documents in the history of anti-Semitism in Europe after the Holocaust.” Meinhof termed the Black September attack “anti-imperialist, anti-fascist and internationalist.” The Munich attack was on “Israel’s Nazi fascism.” Meinhof and Andreas Baader still carry a kind of Bonnie and Clyde celebrity among many sections of today’s German Left.

While the GDR weapons deliveries to Palestinian terrorists and Arab states highlight the existential threat to Israel, Herf does not let the West German government off the hook. A scarcely covered topic in modern German history is Chancellor Willy Brandt’s abandonment of Israel during the 1973 Yom Kippur War. After a surprise attack by multiple Arab armies, Israel was on the ropes, desperate for arms and ammunition. To the frustration of President Richard Nixon and Secretary of State Henry Kissinger, Brandt stuck to an ironclad “neutral position toward the conflict in the Middle East.” The Nixon administration sought to use the port of Bremerhaven to deliver weapons to the Israelis. Nixon said at the time: “The Israelis must not be allowed to lose.”

Herf acutely shows the glaring rift between West German rhetoric and action, writing: “West Germany’s neutrality stance … amounted to a one-sided position in favor of the Arab states even though it was the Arabs who bore responsibility for the war.”

Brandt in his hypocrisy was summed up by Herf as “the Chancellor who famously kneeled in an act of atonement at the memorial to the Jews killed in the Warsaw Ghetto declared his country to be neutral in the most dire days in Israel’s history since 1948.”

The peculiar obsession among large swaths of German elites to mourn the mass murder of Jews during the Shoah while ignoring or playing down Iran’s genocidal threats to wipe out Israel is a continuation of Brandt’s policy. For example, the current Social Democratic foreign minister Frank-Walter Steinmeier, a zealous supporter of last year’s Iran nuclear deal, termed Israeli prime minister Benjamin Netanyahu’s criticism of the agreement as “very coarse.”

While the extreme left in West Germany was not part of the GDR state, it benefited from East Germany’s sponsorship of Palestinian terrorists. This year marked the fortieth anniversary of the hijacking of an Air France plane by a team of German and Palestinian terrorists. Israelis commandoes successfully liberated nearly all of the more than 100 hostages at Entebbe airport in 1976. The Popular Front for the Liberation of Palestine (PFLP) and the West German Revolutionary Cells members Wilfried Böse and Brigitte Kuhlmann carried out the hijacking.

Herf writes that the separation of non-Jewish passengers from Jewish passengers was the first selection process by Germans since the Holocaust. Moreover, “it was the first and only time after 1945 that Germans, East or West, pointed machine guns at unarmed Jews and threatened to kill them.” Israeli eliminated the German terrorists at Entebbe during the rescue. The book meticulously documents the left-wing violence targeting Israel and Jewish institutions in West Germany and abroad.

The origins of the Boycott, Divestment, Sanctions movement (BDS) targeting Israel that began in 2005, can be traced back roughly to 1967. The ad nauseam attacks by the GDR, the Soviet Union and West German Leftists claiming that Israel is a new manifestation of the Hitler movement begin in this period.

The book is chock full of fresh insights into the lethal anti-Semitic foreign policy of the GDR and the deadly social-psychology of West German radicals. Sadly, the lessons of Herf’s book have not penetrated the German Left. The Left Party, the successor to the GDR’s ruling Socialist Unity Party, is today the largest opposition party in the Bundestag. The Left Party continues the tradition of assaulting Israel.

Chancellor Angela Merkel’s coalition partner the Social Democratic Party has formed a “strategic partnership” with the Palestinian Fatah organization that embraces the murder of Israelis.

This groundbreaking book demands to be read, for its advances a deeper understanding of the Cold War period and the Leftist war on Israel. If Germany is serious about grappling with its past, a German publisher will swiftly translate Herf’s comprehensive study.

Benjamin Weinthal is a Berlin-based fellow at the Foundation for Defense of Democracies.


The Jew Flu: The Strange Illness of Jewish anti-Semitism Palestinians: Fatah Prepares for War with Israel