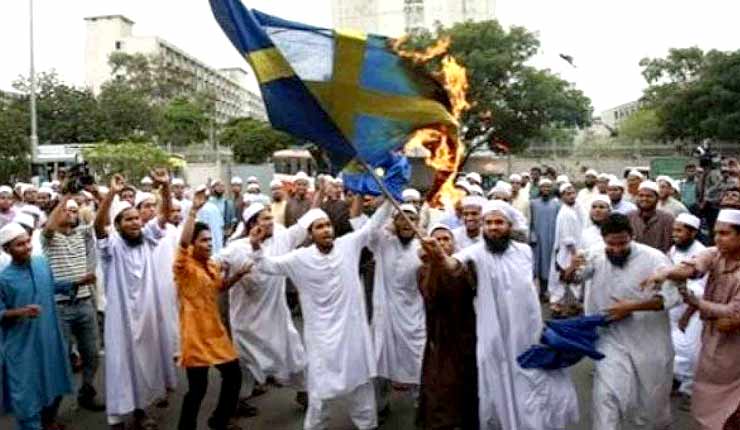 RADICAL Muslims have called for the Islamification of westerners in a demonstration outside of the Swedish Parliament.

In a shocking clip, filmed by politician Hanif Bali outside his workplace, a huge crowd can be seen chanting and praising Imam Khomeini, who enforced Sharia Law in Iran.

Posting the footage on Facebook, Bali wrote: “Today there was quite a lot of noise outside parliament – prayers were proclaimed and people chanted.

“When I first looked outside, I thought I was seeing scenes from streets of Tehran.”

The demonstration, which took place on Wednesday, was instigated by Imam Ali Islamic Center, a Shia Muslim Mosque which has had known ties to hate preachers calling for the murder of homosexuals.

After seeing the demonstration outside the Parliament building, Bali went outside and within moments he said he heard people hailing Imam Khomeini.
Khomeini was a key figure in the Islamic revolution, which was the country transform from a fairly secular Muslim state to a strict implementor of Sharia Law.The Swedish politician also claimed many of those gathered in the square between the Royal Palace and the Parliament House were unaccompanied refugees from Afghanistan.Bali said one of them called for the Islamification of westerners.The minor reported chanted: “May Allah increase our numbers. We must do the Muslims of them all!”Bali added: “What is tragic is that there was not a single journalist in place to report on the immense power demonstration of the loyal Islamic fifth columnist outside the Swedish parliament.”


CAIR's Zahra Billoo: Fallen U.S. Soldiers Should NOT Be Honored on Memorial Day The Iranian Regime Is Not a Natural Partner of the United States