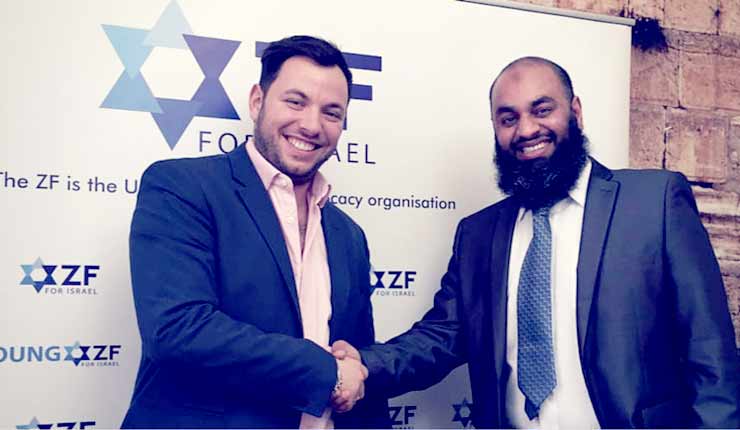 It  is mandatory upon all Muslims to support Israel and her right to exist in the holy land because the holy book of Islam, the Quran supports Israel. There are many verses in the Quran which support the divine right of Jews on the land of Israel but I want to quote only three to justify the right of the existence of Israel. The first verse of the Holy Quran stipulates:

“And We said thereafter to the Children of Israel, ‘Dwell securely in the Promised Land” (Quran: 17:104)

and the second orders the people of Bane-Israel to enter the Holy-Land:

in the third verse, Allah Almighty order the children of Israel to scatter and says:

“And we said to the Children of Israel afterwards, ‘scatter and live all over the world… and when the end of the world is near we will gather you again into the Promised Land” (Quran:17:104)

The above-cited Quranic verses are a solid proof that this land was divinely given to the people of Israel and Muslims have no religious or historical claim to possess this land. There are many religious Islamic scholars and secular Muslim modernists who not only showed their full support to Israel but proved through writing that Israelis have a historical and divine right to exist in the Promised Land. The land was promised to the Bane-Israel in the holy Torah and in the holy Quran respectively. There is little agreement among past or contemporary Islamic scholars and Muslim academics about the exact location of the “beautiful dwelling place” that Allah gave to the Jews. According to Muslim modernist writer Tarek Fatah:

While al-Tabari’s medieval commentary on this verse mentions Palestine and Jerusalem as the land of God assigned to the Jews, it also lists other possibilities, such as Mount Sinai “and that which is around it”, Syria, Jericho, Damascus and Jorden.

The land of Israel, which is mentioned as a Canaan in the Holy Quran referred to the Jews, the people of Israel and the descendants of Prophet Isaac (PBUH). However, the Arab land was given to the descendants of Prophet Ismail (PBUH), it’s a bright truth which every Muslim should accept and support it. According to Prof. Sheikh Abdul Hadi Palazzi a lecturer in the Department of the History of Religion at the University of Velletri:

“God wanted to give Avraham a double blessing, through Ishmael and through Isaac, and ordered that Ishmael’s descendants should live in the desert of Arabia and Isaac’s in Canaan. The Quran recognizes the Land of Israel as the heritage of the Jews and it explains that, before the Last Judgment, Jews will return to dwell there. This prophecy has already been fulfilled.”

There is an argument which still remains unanswered that which land, Allah promised to the people of Israel, a land which was the Kingdom of Israel (Eretz Yisrael) in back days or the land (State of Israel) which has new current borders? Sheikh Muhammad al-Husseini, a British imam who teaches a course on the Quran at the Leo Baeck College in London says:

“They are pointing to the same area; it is not Egypt, Saudi or Iraq”. According to al-Husseini “The traditional commentators from the rights and the ninth century onwards have uniformly interpreted the Quran to say explicitly that Eretz Yisrael has been given by God to the Jewish people as a perpetual covenant. There is no Islamic counterclaim to the Land anywhere in the traditional corpus of commentary.”

I personally do not argue on the ancient borders of the kingdom of Israel but I must argue that every Muslim must accept the current borders of the state of Israel according to the teachings of Islam. The Quranic verse again and again reminds Muslims about the rightful owners.  It says;

“O’ My people. Enter the Holy Land, which Allah has destined for you,and do not turn your back or you will turn about losers.” (Quran: 5:21)

One of the earliest commentaries on the Quran was made by the 18thcentury scholar Muqatil ibn Sulayman. Sulayman said:

Allah instructs Moses to order the Jews: “Do not retreat from that land, or you will be losers. This is because God said to Abraham, when he was in the Holy land, “Verily, this land is which you now stand will be an inheritance for your son after you.

According to Khaleel Mohammad, Professor of Religion at San Diego State University:

“When I tell people that the medieval Muslims – based on the Quran – were happy to look forward to the resettlement of Israel by Jews, and that the Caliph Omar called the land a Waqf (trust) because he knew it was not territory to be conquered, but saw it as a land to be held in trust for its rightful owners, they look at me as if I am from outer space.”

I have always mentioned in my previous articles published in various newspapers that the Palestine and Israel conflict were actually political, but it was dragged in the religious way, because the Muslims rulers and leaders knew, they cannot beat the state of Israel on the grounds of nationalism so they decided to bring so called religious Jihad against the state of Israel.

They were successfully achieved a political goal through waging so called holy Jihad to create a chaos and fear within the Israeli community through Political Islamic Extremist movements such as Hamas, Hezbollah and many others. Professor Khaleel Mohammad further says on this conflict:

After the Arabs lost the Six-Day War, Islamic scholars convened in Cairo and tried to make Palestine into a Muslim cause, realising that Arab nationalism was not enough to forge a strong alliance. Among the resolutions of the conference was to basically create a state of jihad.

Extreme religious clerics teach Muslims that Islam forbids friendships with Yahud (Jews) and Nasarah (Christians), which I believe is a pure political Islamic rhetoric nothing else. Most of the Islamic countries have strong relations and most of the Muslims in the world have good friendships with Christians. They have a religious and political cohesion among each other and they do not even bather the warning given by the Extremist clerics that Islam forbids friendships with Christians, but whenever these relations turn into the direction of Israel and to the people of Israel, all Muslims recall what Allah ordered them not to make friendships with yahud (Jews). This is a pure political and religious hypocrisy in the Muslim world. The reality is far different. The Quran says:

. . . Likewise, you are permitted to marry chaste believing women [Muslims] or chaste women among the people who were given the Scripture [Jews and Christians] . . .. (Quran: 05:05)

This is how contradictory concepts of some scholars create misunderstanding between the Jews and Muslims by issuing statements that Allah forbids friendships with Jews. On one hand Allah says Muslims can marry with the Jewish women and on other hand Allah says we cannot make friendship with Jews. How contradictory is that! The fact of the matter is that Allah never said this. There is no contradiction between both verses but we have lack of knowledge to understand the real face of Islam and the true teaching of the Quran. In reality, the Quran never ordered that we cannot make friendship with Jews. Let’s read what the real position of Islam on this issue is: Extremist clerics mention the verse of the holy Quran:

“O’ YOU who have obtained faith! Do not take the Jews and the Christians for your allies: they are but allies of one another and whoever of you allies himself with them becomes verily one of them; behold, God does not guide people who are unjust.” (Quran: 5:51)

This verse is often quoted to show that Islam is intolerant.

A complete understanding can only be achieved by understanding the whole issue as presented over all the verses and chapters and not by looking at only part of the Quran. God specifically warns us against doing just that, upholding part of the Quran while disregarding the rest. During the time of the Prophet Muhammad (PBUH) when the Jews and Christians were in open conflict with the Muslims, there were some Muslims who were more concerned about maintaining their alliances with the Jews and Christians at the expense of the Muslim community.

The above verse is referring to such situations where Muslims with doubts in their hearts will ally themselves with the enemy. Let us look at some other verse about this issue. The following verse regulates relations with any people, regardless of faith: As for such [of the unbelievers] as do not fight against you on account of [your] faith and neither drive you forth from your homelands, God does not forbid you to show them kindness and to behave towards them with full equity: for verily, God loves those who act equitably. (Quran: 60:8)

From the above verse, we learn that we are only discouraged from befriending those who fight Muslims because of their religion. So, according to the above verses from the Quran, you can be kind to Jews, you can have Jewish friends and you can have a good relationship with Jews except those who fight with you. Muslims have many similarities with the Jewish religion and we are not forbidden to make friendship or marry with the Jewish people.

Allah has made our relations strong by instructing to marry with the Jewish women. We are very closest allies religiously and politically in the world, especially in the Europe. We should not fight but to unite each other through religious and political gatherings.

According to Imam Abdullah Antepli, the architect of the programme Muslim Leadership Initiative:

Jewish and Muslim communities in Europe and North America are the closest natural allies to each other. They have so many common challenges and so many common opportunities to thrive together. So far, both communities seem to ignore each other or fight – figuratively speaking – the proxy war of the Israel-Palestine conflict.

Moreover – and those who try to use Islam as a weapon against Israel always conveniently ignore this point – the Holy Qur’an explicitly refers to the return of the Jews to the Land of Israel before the Last Judgment – where it says: “And thereafter We [Allah] said to the Children of Israel: ‘Dwell securely in the Promised Land. And when the last warning will come to pass, we will gather you together in a mingled crowd.’” [Qur’an 17:104]. Therefore, from an Islamic point of view, there is NO fundamental reason which prohibits Muslims from recognizing Israel as a friendly State. In the end, I want to quote another verse from the Holy Quran, which clearly says:

“O Children of Israel, remember My favour that I have bestowed upon you and that I preferred you over the worlds” (Quran: 2:47)


Eric Zemmour: Islam Declared War on us, Because We Haven’t Submitted Completely to Islam The Soviet-Palestinian Lie