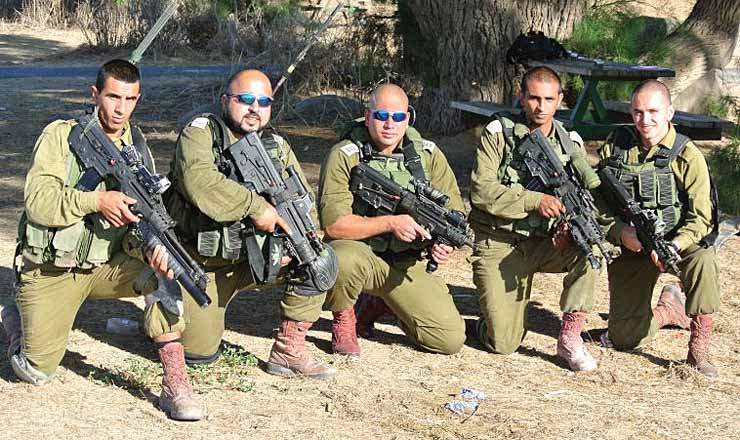 Unit 585’s men take pride in ‘Israel in miniature,’ which includes other minorities and even Jews.

The jeep stops on a chalk-like dusty road, at an embankment that overlooks a dry riverbed. In front of us, to the northwest and spanning the gully, are two rows of metal fences. To their left, on a small hillock, is a concrete watchtower, a “pillbox,” as it’s called, harking back to World War II British Army nomenclature. A U-shaped concrete wall protects its base so that men entering and leaving are not exposed to gunfire.

The commander doesn’t want to stay long. He points to the houses a few kilometers away. “That’s Gaza.”
We’re right on the border. The IDF officer and his medic hand me a camouflaged flak jacket for safety.

The commander gestures in the other direction to show off Israeli fields. The agriculture belongs to border communities that unit 585, the Desert Reconnaissance Battalion, guards. Then Maj. Nader Eyada orders his men back into the vehicles to continue driving along the border with Gaza.

It’s 27 Celsius at 6 on a Monday morning. The soft colors of the rising sun give the landscape a fresh, calm feel. Israel’s desert patrol, made up mostly of Beduin officers and men, has a long day ahead.

Founded almost 30 years ago, the battalion is unique in that it is a mostly volunteer unit of Beduin soldiers. For much of its existence it has been based along the border with Gaza, playing a key role in preventing terrorists from infiltrating Israel.

One of the unit’s bases is at Kissufim, next to the kibbutz and the Gaza border crossing. During the 2005 disengagement from Gaza, Israelis left the Strip through this crossing. Over the years many mortar shells have hit here. Throughout the day and night, desert recon patrols leave from here.

The unit uses MDT David jeeps, Humvees and lumbering “Ze’ev” trucks, a traveling medevac, during its patrols. There are also specially trained Beduin trackers who accompany its operations along the border fence.

“The mission is to protect communities and Israel,” says Maj.

Eyada, a 10-year veteran of the unit.

“The enemy is always changing, like any threat. They are always learning.”

As we drive out, navigating fields and dirt roads going in all directions, Eyada and his soldiers take pride in seeing the agriculture in bloom. “We are here to protect the communities and let the farmers work their fields in peace,” says Eyada, who comes from the Beduin town of Beit Zarzir, on the outskirts of the Jezreel Valley. A rising star in the army, he has a bachelor’s degree from the University of Haifa and has served since the disengagement.

“We have a very strong unit from various communities,” Eyada says.

“It comes from the fact that it’s a volunteer service. I never met such people. We have Beduin, Christians, Muslims, Druse and Circassians.”

Some of the volunteers come to the army with very low levels of reading comprehension and Hebrew. Because they come from Arabic-speaking, mostly Beduin, communities that tend to be poorer, they receive a worse education than many native Hebrew-speaking recruits.

“The IDF works within the unit to take soldiers from level zero so they can do it all and are now commanders,” Eyada notes. Because of the high level of motivation and the skills the army has imparted, many choose to stay on after volunteering for their initial three years.

The IDF is seeking to expand the opportunities for the battalion members. Recently they completed three months of service in Samaria, holding an area near Jenin. The idea is to employ what they learned from decades around Gaza to other areas that require similar expertise in patrolling and tracking infiltrators.

Driving near the border, the major pulls the jeep up to a pretty field festooned with rows of green plants. There are two tall trees providing shade for a bench. It’s time for some Beduin coffee.

One of the soldiers, short and round-faced with gleaming sunglasses, smiles. He points out at the rows of crops growing. “Bananas.”

The saplings have a while to mature. Muhammad Shibli, the banana expert, has been in the IDF for seven years. He’s the main medic in the unit and commands other medics.

“I was born in Shibli [a Beduin village in the Galilee whose name he bears]. I wanted to protect Israel from terrorism and threats, wherever they come from. We live with Jews, there is no such thing as difference, we are one nation living together and we want to live in peace.”

He notes that rockets fired from Lebanon, Syria or Gaza don’t distinguish among people and communities.

All are threatened equally, so all should defend against threats.

Shibli is an example of one of many who benefited from the ability to combine military service with the opportunities it provides professionally as well. He received a matriculation certificate and a bachelor’s degree during his years on patrol. “When I came I didn’t know what I wanted to do, but I chose to stay.”

Many men in the unit join at age 18, but others opt to volunteer up to age 26. Some men, and the battalion is all men, have started families. The major mentions one man who has a wife and four children back home. Those with home life often commute back to the North, where most of the recruits are drawn from, every two weeks.

Hussein Fawaze, a big, jovial man who looks a bit like a cross between Vin Diesel and The Rock, has served with these men for 12 years. His friends call him “Boaz.” He was born in Ailaboun in the Galilee, a pastoral farming community that used to be mostly Catholic Arabs, but which is almost half Muslim Beduin today.

“I wanted to go to the army. I think we need to contribute to the IDF,” he says. It’s an historical bond for Fawaze, dating back to the 1948 war when some Beduin tribes allied themselves with Israel during the War of Independence. Fawaze joined during the second intifada, but he says it didn’t take away from his decision.

“I came from a family that contributes to the country… I felt a part of Israel and we have responsibility. We must be part of it just like my [army] friends from Tel Aviv. After 12 years I don’t regret one second that I came to this unit.”

The army is a key to Israeli society, he asserts. “This is like holding a card that says we’re part of this country. When I tell someone I did three years in the army, the whole story changes, if I didn’t go to the army it would be different. I think it’s the responsibility of every Beduin.”

The men say they don’t have trouble getting recruits. The IDF does not release exact numbers for the unit or for the overall number of Beduin and other Muslim and Christian volunteers in the army.

Circassians and Druse men, as well as Jewish Israelis, must have compulsory military service.

There are also confusing numbers relating to the number of Beduin in Israel. When Beduin are discussed, it is usually in relation to the 200,000 Beduin residing in the Negev. However, most of the Beduin in the desert recon unit are from the North, from communities like Shibli, that have been living in villages often indistinguishable from Jewish and Arab ones since the 1950s.

Dr. Yosef Ben-David of the Jerusalem Institute of Israel Studies wrote in 1999 that there were around 50,000 Beduin in the Galilee. Since 1948, more than 110 Beduin have died defending Israel.

Because of disputes with the state over land, recruitment among Beduin in the South appears to be low.

More than 50,000 Beduin in the Negev live in unrecognized communities.

The men in the unit said they heard about groups that encourage southern Beduin not to serve. “There are extremist groups that come into the Beduin communities and say don’t go,” says Fawaze.

A Facebook page of the IDF in May 2014 claimed that “about 450 Beduin volunteer to serve in the IDF each year.” According to Fawaze, the number of volunteers fluctuates.

“It’s not dramatic [change], we always have people who want to go.” He wonders why more don’t volunteer. “If I am a citizen why wouldn’t I go? If I want electricity or a paved street, if I go to the army, it’s my right to demand that, so people know if they go they also receive.”

In the last decades there has also been an increase in the number of Christian and Muslim volunteers from non-Beduin communities.

The army provides extra financial support during the last six months of the three-year service they sign up for. Most combat soldiers receive only NIS 1,600 a month, which is difficult for men who want to support families or who might otherwise need to learn a skill or trade.

With the army cutting back on the number of men staying on as professional soldiers, the men in the battalion say that the experience still provides security in post-army life. Some join the police or the Prisons Service or other security services afterward. “We have many who went on to other units in the army; to officers courses. Beduin have a tradition of military service,” says Fawaze.

The men feel that there are many slanders in the foreign media about Israel and the army. “It’s lies you hear abroad. We are defending against threats, no other country can defend as well as we do and no other country in the world does what we do,” says Shibli.

“I helped Sudanese [refugees], and what people say is lies. We don’t hurt innocent people. “Muslims should be proud to be part of this army.” They also think there is a false perception about rising levels of racism in Israel. “In every place there is racism, but we don’t feel it here. It’s not something that personally bothers me,” according to Fawaze.

There’s a family-like atmosphere here, sipping coffee under the quiet blue sky. Roee Hezi, an American who was drafted in 2015 after making aliya, seems to be one of the few Jews in the unit. “My parents are Israeli. When I came the army said they needed more combat medics and eventually I came here. What’s unique here is that everyone volunteers to go, so there is high motivation.”

I wondered if his lack of Arabic was a problem when the men go back to barracks. Hezi says it isn’t an issue.

Shibli, who constantly wants to remind me that I should come back during another season when we will see bananas, avocado and melons growing, says the real special thing for the men is that they feel like they have an “Israel in miniature” in the unit. “You won’t find anywhere in the world like this,” adds Fawaze. “Moshe defends Hussein who defends Yusuf who defends Roee. We defend the communities and it’s a miracle and all of us from diverse communities serve together with no difference.”