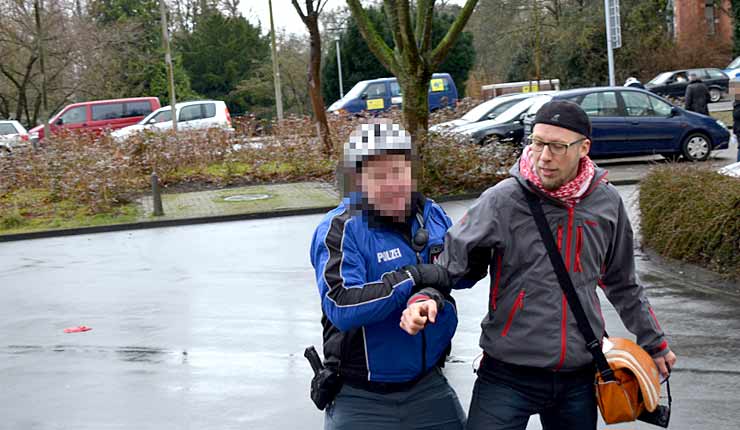 The fact that the teacher Christoph Glanz “posed as a Jew shows he is fanatically dedicated to promoting his anti-Semitic agenda,” says Simon Wiesenthal Center’s chief Nazi-hunter.

A teacher in the German state of Lower Saxony who advocates a complete boycott of Israel posed as a Jew in order to sign a petition calling for all Palestinian refugees to be returned to the Jewish state.

The petition, titled “Jews for Palestinian Right of Return,” was located online by The Jerusalem Post on Saturday night. The 2013 anti-Israel document also said that “the Zionist regime officially denies the Nakba, the ethical equivalent of Holocaust denial.”

Speaking from Jerusalem, Efraim Zuroff, the Simon Wiesenthal Center’s chief Nazi-hunter, told the Post on Monday that the fact that the teacher, Christoph Glanz, posed as a Jew “shows he is fanatically dedicated to promoting his antisemitic agenda.”

Zuroff continued by saying “it is absolutely insidious” that Glanz falsified his identity to advance “hatred of Israel.”The teacher is currently under investigation by Lower Saxony school authorities for alleged antisemitism and violations of the civil service requirement of political neutrality.

Multiple Post press queries to Glanz at the school, IGS Flötenteich in the northern city of Oldenburg, as well as to his email addresses, were not returned.

Palestinian officials and anti-Israel activists claim that the Palestinian refugee population exceeds seven million. Israel says the return of millions of Palestinians and their descendants is an existential security issue and would obliterate the Jewish state.

Glanz concocted a second false identity to promote the Boycott, Divestment, Sanctions movement targeting Israel. He uses the fabricated name Christopher Ben Kushka to deliver boycott talks across Germany and on social media. In November 2015, he delivered a pro-boycott talk in a municipal-funded cultural center in Munich under the alias Christopher Ben Kushka.

According to the Jewish community in Oldenburg, Glanz uses the Jewish-sounding name Ben Kushka as a way to insulate himself from accusations of antisemitism.

A September article posted on a US-based anti-Zionist website where Glanz published a BDS article said he “adopted the pen name Christopher Ben Kushka so as to preserve his ability to visit Palestine.”

The Hebrew-language daily Israel Hayom published an interview over the weekend with Michaela Engelmeier, a prominent Social Democrat in the Bundestag, Germany’s parliament, who previously told the Post that Glanz is a “racist and antisemite.”

Israel Hayom also reported on Glanz’s commentary in favor of dismantling Israel and relocating the Jewish state to the southwestern German state of Baden-Württemberg.

Englemaier, who is currently in Israel, told Israel Hayom: “They don’t know who they’re dealing with. No antisemite or Nazi will silence me. The attacks against me only encourage me, and prove to me how important my mission is.”

Glanz told a pro-Palestinian website that the allegation of antisemitism leveled against him was “absurd.”

The Post first reported in September on Glanz’s apparent endorsement of the eradication of Israel and the resettlement of Jews in Germany.

Bianca Schöneich, a spokeswoman for state school authorities, told the Post that the investigation regarding Glanz was ongoing.

The phenomenon of anti-Israel Germans who have posed as Jews to bash Israel has precedents. In 2010, Edith Lutz, a non-Jewish German who tried to break Israel’s naval blockade of Gaza aboard the catamaran Irene, said she converted to Judaism. German media reports revealed she did not convert to Judaism, but the Irene was dubbed the “Jewish boat” and garnered widespread media attention because of the presence of a small number of Jews onboard.

In 2012, a non-Jewish German poet and anti-Israel activist acknowledged that she fabricated her supposed service in the IDF during the First Lebanon War.

“I said I was in the IDF,” but “it was a lie,” Irena Wachendorff, 51, told the Post. She has called strong pro-Israel activists “the neo-Nazi troop among the Jews,” and expressed support for Hamas in the Gaza Strip.


Meet the IDF’s ‘Beduin battalion’ French PM: There WILL Be Another Terror Attack, 15,000 On Watchlist