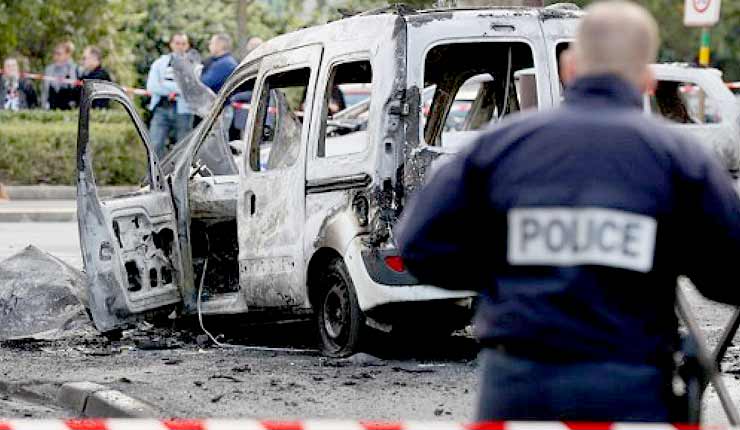 What happens the day immigrant gangs get tired of burning cars and throwing rocks at the police? French suburbs are still leading the way, so Malmö police should pay particular attention, as it will soon follow there.

On Saturday afternoon it was not enough for the mob in one of Paris’ suburbs to burn cars in the neighborhood. They instead simply attacked the police with Molotov cocktails – while the police officers were inside the cars.

In broad daylight a dozen masked men attacked the police. Two of the police officers were so severely burned that they were sent straight to intensive care, while two others had to have hospital treatment for burn injuries.

The horrifying attack took place on the Grande Borne, a “sensitive” area or no-go zone if you will, in the southern Paris suburb of Viry-Chatillon.

The cars were parked up on the estate as a part of a surveillance patrol monitoring a surveillance camera near a set of traffic lights’ said a police source, who said the violence started just before 3pm.

When reinforcements arrived to the scene they were also attacked with Molotov cocktails. “You’d think it was planned and organized,” said chief of the national police, Jean-Marc Falcone.

Both President Hollande and Prime Minister Valls commented on the case. Both knew in advance what they were going to say. That “everything will be done to find the perpetrators of this attack and bring them to justice so they receive a sentence in-keeping with the severity of their crime,” and that it is terrible that they attack police who have to work to protect the population. Also that it was a “cowardly” attack, of course. But again, no solution to the problem. Once more simply an isolated event.

Le Figaro, however, describes how for one year the city has tried to reclaim the territory. The newspaper is now openly talking about territories lost in France.

“At this point, no arrest has been made, according to police sources. The violence occurred in the city of La Grande Borne, a area that has long been the scene of violent fights. For over a year, the municipality has been trying to regain the territory from the aggressors at the crossroads called “the Bakehouse,” named after the nearby bakery, and for this purpose had installed a CCTV camera. The policemen that were attacked were there to check the camera. This camera is brand new: the previous one was indeed destroyed two weeks ago with a stolen van used as a ram, which was then burned with Molotov cocktails. The scene took place at lunch time, in front of many passersby.”


Anti-rape, anti-honour killing bills are a Jewish conspiracy: Jamshaid Dasti German MP: No anti-Semite or Nazi will silence me