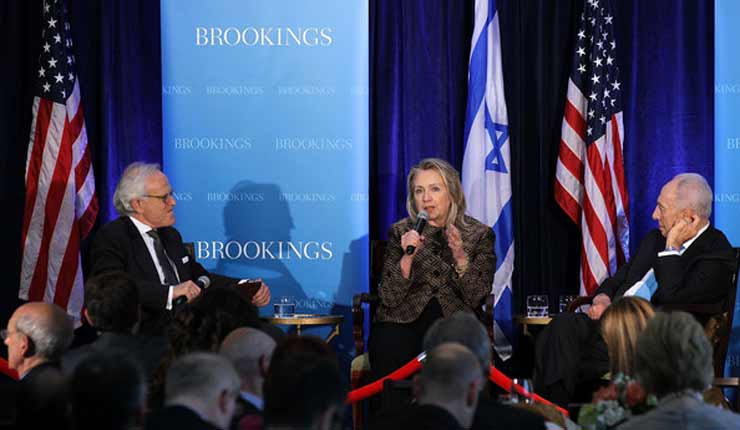 November will see one of the consequential elections of our lifetime. With Israel and the world enduring another cycle of terrorism, and the Jewish State’s very existence threatened by the catastrophic Iran deal, the American election has a direct bearing on Israel’s future.

I’ve written in the past about the State Department’s email dump of Hillary Clinton’s communications from her private server. The former secretary of state received a veritable trove of advice and information about Israel from her closest advisers. Curiously, it was mostly negative and hostile to Israel. It behooves Hillary to explain the emails and why they are mostly of a negative nature.

Here are some examples.

Martin Indyk was advising Clinton during her time as Secretary of State. In 2007, Indyk’s Brookings Institution, a purportedly objective non-partisan government think tank, opened up a branch in Qatar, a country that is virulently anti-Israel and which currently serves as Hamas’ main financial backer. Seven years later it was revealed that Indyk’s relationship with Qatar had progressed to the point that Qatar had given $14.8 million dollars to Indyk’s institute. This phenomenon of foreign governments purchasing political influence via think tanks in Washington has been well attested to in the past.

Keep in mind that in the background of this concealed, blatant conflict of interest, Indyk was one of the top diplomats assigned to formulating policy and negotiating a two-state solution in Israel. The bombshell revelations of the Qatari donations compromised Indyk immensely and Netanyahu’s government responded by saying that Indyk could not be trusted. Nonetheless, during Clinton’s time as Secretary of State, Indyk had her ear when it came to Israeli-Palestinian negotiations. Indyk’s emails to Clinton show a Qatari-inspired anti-Israel bias. He talks about the need to look, not at Netanyahu’s politics, but his “psychology.” He writes to Clinton’s advisors of Netanyahu: “[A]t heart, he seems to lack a generosity of spirit.”

Indyk attacks Netanyahu over and over as having “inflated demands” and lacking the willingness to risk Israel’s security with a West Bank that would likely become yet another Hamastan. He writes nothing of Palestinian Authority President Mahmoud Abbas’s continual incitement and his calls for the murder of Israelis or the need to outlaw terrorist groups.

Indyk also describes how world opinion can be used against Netanyahu, writing, “If Israel doesn’t make a serious move, it will further delegitimize its standing internationally.” He also describes how the US can use the fear of a potential nuclear Iran to force Israel to sign a deal with the Palestinians, because “Bibi needs President Obama in his corner to deal with the threat from Iran.”

Then there is Jake Sullivan, who currently serves as a top foreign policy advisor for Hillary’s campaign and who was Clinton’s deputy chief of staff while she was Secretary of State. Sullivan has also been revealed to harbor anti-Israel views. In one heavily redacted email to Clinton regarding talks with Netanyahu, Sullivan’s subject line reads “dealing with Netanyahu.” There is often a cavalier attitude in how many of Hillary’s subordinates refer to the Prime Minister of Israel. His name rarely comes with any titles reflecting his status as an elected leader. Rather, he’s usually just “Netanyahu.”

Then there is, of course, Sidney Blumenthal, of whom I have written much in the past, especially about his anti-Semitic son Max, who recently celebrated the death of, and defamed, Elie Wiesel, prompting Hillary Clinton to disavow him, something for which she deserves great credit.

Sidney Blumenthal sent Hillary an anti-Semitic article entitled, “The preemptive strike on Jodi Rudoren” that claims the Jewish lobby “sought to influence media coverage in a variety of sometimes heavy-handed ways” and says “the pressure from these groups is relentless.” This column was retweeted by Max Blumenthal. And Hillary found the article important enough to forward it to Sullivan and her deputy assistant Secretary of State Phillipe Reines. She writes to them, “Had you seen this?” Sullivan responds to the anti-Semitic article, “I hadn’t. Interesting.” Reines, on the other hand, seems to have been so disgusted by this intolerant article that he surprisingly shoots back to Hillary, “My people control the banks too.” It appears Reines was letting Hillary know that this article was deeply biased and on a par with other well known libels against the Jewish people.

Jake Sullivan has also shown himself to be a fan of Peter Beinart, whom I have debated several times and someone who justified terrorist attacks against Israelis and demanded that America punish Israel for electing Netanyahu. Beinart, in one of our debates, compared the world’s foremost Jewish philanthropist and the principal sponsor of Birthright, Sheldon Adelson, to the terrorist leaders of Iran.

Beinart’s writings are blatantly anti-Israel and he has become infamous in the Jewish community for his calls for a complete boycott of Judea and Samaria in the hopes of forcing Israel to withdraw and allow terrorist Hamas to fill the vacuum. The fact that Hamas or Islamic State would inevitably overthrow Abbas’s weak government, as happened in Gaza, does not weigh in Beinart’s demands that Israel be punished if it does not accede to his demands.

Unfortunately, it isn’t just Sullivan. It seems that Hillary Clinton herself is a fan of Peter Beinart.

After Sid Blumenthal sent Hillary an anti-Israel column by Beinart, Hillary forwarded it to Sullivan, writing, “Pls read so we can discuss.” In response, Sullivan writes “Fascinating.”

When Blumenthal sent Hillary an article by his son Max filled with his usual anti-Israel drivel, Clinton forwarded the article to Sullivan with the message, “Interesting reading.”

Sullivan responds, “This is really fascinating. Does Beinart get into all of this?” Hillary responds, “Yes.”

Sullivan’s response to another Israel-hating Max Blumenthal article is to call it “fascinating” and try and compare the ideas it contains with the writings of Israel critic Peter Beinart. Of course, it was Bill Clinton himself who wrote a wild endorsement of Beinart’s book The Crisis of Zionism, in which Beinart charges Israel with everything from racism to apartheid-like conditions.

I have every desire to treat Hillary Clinton fairly when it comes to Israel and, as I wrote above, she deserves credit for finally disavowing the demented anti-Semitism of Max Blumenthal, even though he is the son of her foremost advisor.

But it’s important to note that when former senior adviser to President Barack Obama Dennis Ross wrote his tell-all book Doomed to Succeed: The U.S.-Israel Relationship from Truman to Obama, he described a faction within the White House that saw Israel as “more of a problem” than a partner. Since Hillary describes herself as someone who was a great friend to Israel in the Obama administration, it is imperative that she publicly clarify her position on Israel vis-a-vis some of her advisors whose opinions on Israel are deeply hostile.

“America’s Rabbi,” Shmuley Boteach, whom The Washington Post calls “the most famous rabbi in America,” is Executive Director of The World Values Network, which promotes universal values in politics and culture, and is the international best-selling author of 30 books, including his forthcoming, “The Israel Warriors Handbook.” Follow him on Twitter @RabbiShmuley.


German MP: No anti-Semite or Nazi will silence me The Unbearable Misunderstanding of Goldberg