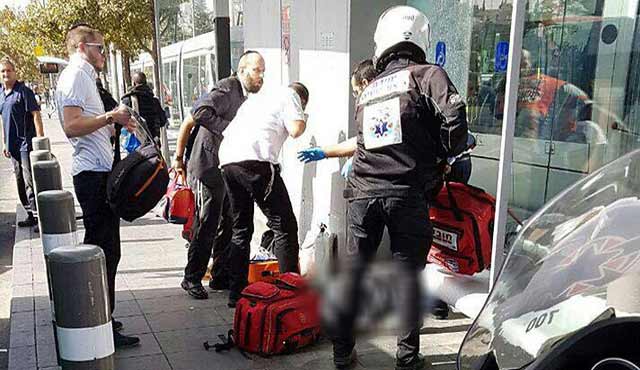 Two Israelis who were gravely injured in a Jerusalem shooting attack on Sunday morning have died of their wounds, a hospital spokesperson said.

The fatalities in the terror attack at Ammunition Hill were a female bystander in her 60s and a police officer, approximately 30 years old, who was involved in the shootout with the terrorist.

Their identities were not released as the case is under a court-issued gag order.

The two were taken to Hadassah Hospital Mount Scopus, where doctors attempted to revive them, a hospital spokesperson said. They were later pronounced dead.

At least five other people were injured in the attack on Sunday morning, police and emergency medical officials said. Three of the injured were shot and two others hurt after the terrorist plowed his car into theirs.

Three of the victims, including a 68-year-old man, were moderately wounded, while another two were lightly injured in the attack, according to the Magen David Adom emergency medical service.

The attacker was shot and killed. He was identified as Mesbah Abu Sabih, a 39-year-old resident of Silwan in East Jerusalem, police said.

According to reports, he was to report to prison on Sunday to serve a sentence for incitement.

“There were no prior warnings ahead of a focused attack like this,” Erdan said.

The attack began as the assailant drove by police headquarters on Haim Bar-Lev Street, a main artery also served by the city’s light rail, and opened fire at a group of people, hitting one woman, police said.

He sped off toward Charles Simon Clermont-Ganneau Street and shot a woman who was in her car, critically wounding her.

He continued toward the Arab neighborhood of Sheikh Jarrah. Police officers on motorcycles from the city’s Special Patrol Unit saw the shooting and gave chase, police said.

The assailant then opened fire at the officers, who shot and “neutralized him,” police said.

During the shootout, one officer was fatally injured and another lightly to moderately injured, police said.

A video that was released on social media (below) appeared to show the shootout between police officers and the terrorist.

Three people were also treated at the scene after they suffered anxiety attacks, MDA said.

Jerusalem Mayor Nir Barkat, who had been on a tour of the West Bank at the time of the shooting, rushed back to the capital to visit the scene of the attack, as did Erdan and Israel Police Chief Roni Alsheich.

The Hamas terrorist organization praised the shooting, calling it “heroic,” “brave” and a “natural response to the occupation,” Army Radio reported.

At the start of the weekly cabinet meeting, Prime Minister Benjamin Netanyahu sent well-wishes to the Israelis injured in the shooting attack.

The prime minister praised the security forces involved, who he said acted “very quickly and with determination” and “hunted down the terrorist and killed him.”

After the attack, police asked for and received a gag order on the details of the investigation of the shooting, a spokesperson said.

Hadassah Hospital opened a dedicated hotline for information about the victims. People in Israel can dial 1255121.

The attack broke a spell of calm in the capital that followed a months-long wave of violence last autumn and winter that included several attacks near Ammunition Hill.

Officials had feared a return to stabbing, shooting and car-ramming attacks with the onset of the fall holiday season, when religious tensions often spike.

October 2015 marked the start of several months of near-daily attacks during which at least 34 Israelis and over 200 Palestinians were killed in a spate of attacks. Most of the Palestinians killed were attackers or involved in clashes with troops.