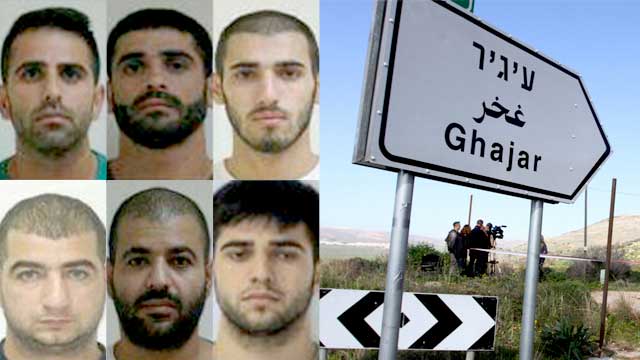 6 residents of the village of Ghajar, among them three brothers and their cousin, are suspected of smuggling explosives from Lebanon to be used in attacks in northern Israel; plot discovered after Israeli farmer found the bombs hidden in a grove.

Six residents of the village of Ghajar in the Golan Heights were charged on Thursday with receiving explosives from Hezbollah to carry out terror attacks in Haifa.

The plot was foiled after the main defendant, Diab Kahamuz, had forgotten where he had hidden the explosives, which were later discovered by an Israeli farmer.

Diab Kahamuz, 31, is the son of Saeb Kahamuz, a drug dealer and Hezbollah member who escaped to Lebanon during the 2006 Second Lebanon War. Saeb allegedly contacted his son using encrypted emails, suggesting that Diab used his drug smuggling infrastructure to smuggle explosives from Lebanon into Israel. The senior Kahamuz also told his son how to directly contact Hezbollah operatives.

Among Diab’s accomplices are his two brothers—Jamil Kahamuz, 29, and Yussef Kahamuz, 34, their cousin Mohssan Kahamuz, 21, and two other residents of Ghajar—Adal Ayunat, 29, and Ibrahim Mamdouh, 21. Ghajar is an Alawite-Arab village on the Hasbani River on the border between Lebanon and the Israeli Golan Heights.

His brothers were charged with aiding in these offenses, while their cousin was charged with giving information to the enemy among other offenses.

On July 30, a farmer from the northern city of Metula found a bag containing two explosive devices in a grove near Highway 90. Explosives experts who examined the two bombs, which had delay fuses and were found to be very powerful, determined they were made by Hezbollah.

The indictment goes on to describe how Diab and his brother Yussef drove along the route between the Golani Interchange and the Tur’an Junction, taking photos and filming videos of the road and the bus stop. Diab’s other brother, Jamil, aided by sending the photos to their Hezbollah handlers.

Later, Diab went to retrieve the explosives from their hiding place but was unable to locate them.

On September 4, Diab and the other suspects were arrested and taken for interrogation. Investigators seized computers and cellphones belonging to the suspects, where they found photos that were sent to Hezbollah of possible targets for attack—including military bases and sensitive locations in the village of Ghajar itself.

“Hezbollah and other terror organizations are making great efforts to carry out attacks inside the State of Israel, while working to recruit collaborators from among the citizens of the state. A quick and thorough investigation into several lines of inquiry has led to the arrest of all of the members of the terror cell and prevented a mass-casualty terror bombing,” the police said in a statement.