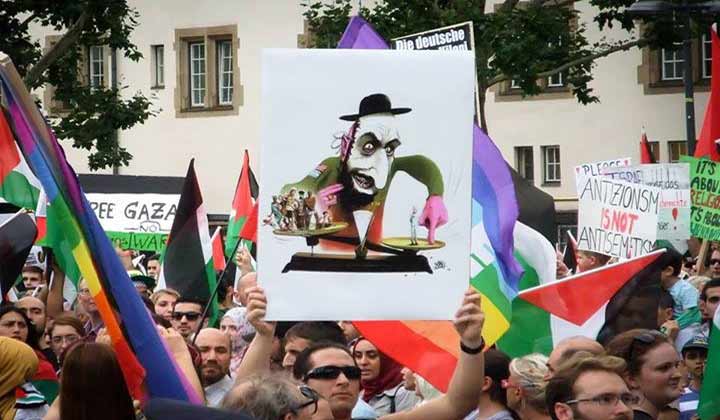 If you thought you noticed increasing Jew-hatred online and in mainstream European media, you were right — and Professor Monika Schwarz-Friesel can quantify that scientifically

J ERUSALEM — One of Europe’s most distinguished anti-Semitism researchers, Monika Schwarz-Friesel, has an alarming message: Scientific measures indicate a massive upsurge of Jew-hatred on the internet, as anti-Semitism reestablishes itself as an increasingly visible element in European mainstream discourse.

A psychologist, linguist and professor of cognitive science at the Technical University of Berlin, Schwarz-Friesel is one of the most quoted experts on anti-Semitism in both international academic literature and the German media.

In her numerous publications she analyzes and exposes new manifestations of old anti-Semitic sentiments — disguised though they might be — employing much of the same Jew-hatred that has been shaping European discourse throughout the years, even when officially outlawed.

These analyses are evidence that recent anti-Israeli tropes demonizing the Jewish state are actually work-arounds of old anti-Semitic sentiments that have been with us for two millennia.

As the go-to scholar on anti-Semitism in Europe, in March 2016, Schwarz-Friesel delivered a keynote speech at the Berlin Conference on Combating Anti-Semitism in the Bundestag (the German federal parliament) which was attended by 100 lawmakers from 40 countries. In 2015 she wrote a much noted expertise that was part of the testimony against German journalist Jürgen Elsässer in a court case, in which the latter sued the publicist and former politician Jutta Ditfurth for calling him a “glowing anti-Semite.”

And now, to further amplify her research outside of Europe, an English translation of her much celebrated study titled “Inside the anti-Semitic Mind” (co-authored with former Brandeis University president, Jehuda Reinharz), will be available this upcoming November.

Currently, Schwarz-Friesel, is spending the last part of her sabbatical in Jerusalem, where she met with The Times of Israel on Hebrew University’s Mount Scopus Campus to share some insight into the truly disturbing results of her research.

Your book “Inside the anti-Semitic Mind” reviews over 15,000 letters, emails and other correspondence that have been addressed to Israeli embassies and Jewish institutions all over Europe. What do these correspondences reveal?

Many of these letters employ classical anti-Semitic stereotypes in order to abuse their addressees, while demonizing the state of Israel and Jews. Jews in general are blamed for alleged crimes by the State of Israel that is slurred as “a hypocritical terror regime, living of the blood of Palestinians,” or a nation of “child-eaters.” Zionism is being equated with racism and Israel is being called an “apartheid regime,” posing the greatest danger to world peace. Such ideas have nothing to do with the reality on the ground. Instead they reflect classic anti-Semitic stereotypes that have been with us for 2,000 years and that brand Jews as murderers and an omnipresent evil force in the world.

It is hard to believe that such views are prevalent in contemporary European mainstream discourse. Aren’t they just characteristic of uneducated, radical subgroups?

Unfortunately, no. The authors of the anti-Semitic letters that we reviewed included students, lawyers, journalists, doctors, priests, self-employed entrepreneurs, politicians and even university professors.

But still, people who address letters to Jewish institutions in order to condemn the State of Israel are not necessarily a representative sample of society.

True. However, other inquiries reveal the same anti-Semitic patterns as well in other domains, such as the social media and even in the quality press. In the framework of a new research project on anti-Semitism in the world wide web, supported by the German Research Foundation, I am currently reviewing Facebook posts and reader comments on articles in the quality media. What I am finding so far is a replication of the same anti-Semitic stereotypes. Israel and Jews are being portrayed as overly powerful and vengeful child murderers. Indeed, speaking for Germany, throughout the past 10 years, anti-Semitic content in comments on the internet and in letters to editors has almost tripled.

Is this upsurge of anti-Semitism on the internet paralleled by a similar development in the quality media?

There are ongoing investigations, the intermediate findings of which raise the suspicion that this could be the case indeed, though it’s too early yet to draw such conclusions with certainty. However, we don’t even have to wait for the definite results of these studies in order to establish that anti-Semitism has resurfaced as an evident element in mainstream European discourse. Just think about the utterances of writer Günter Grass or of the journalist Jakob Augstein that portray Israel in terms of classic anti-Semitic clichés, according to which Jews are a menace to mankind and control world politics.

In addition, there is less and less resistance to anti-Semitic utterances. A case in point is the lack of objection upon the conclusion of the speech by Palestinian Authority president Mahmoud Abbas to the European Parliament last June, which raised the false accusation that rabbis asked the Israeli government to poison the water of Palestinians. Abbas even received standing ovations after this speech, which promoted the classic anti-Semitic slur that Jews are well-poisoners.

There is a global Israelization of anti-Semitic discourse. The articulation of traditional anti-Semitic stereotypes by projecting them onto Israel is by now the most dominant manifestation of modern Jew hatred.

But isn’t it difficult to distinguish such Israel-focused anti-Semitism without being liable to declaring all criticism of Israel per se to be anti-Semitic?

Yes. And remarkably, in the material that we reviewed, this concern is expressed exclusively by authors of letters that are actually anti-Semitic. None of the authors of the letters that criticized Israel without being anti-Semitic voiced any concerns that they could falsely be accused of Jew-hatred. It is the anti-Semites who actually commit the kind of false accusation which they claim to be a victim of, in order to deny their hatred of Jews. This implies a victim-perpetrator-inversion, which is a historically deep-rooted pattern in the standard repertoire of anti-Semitic constructions. Already in the 19th century anti-Semites accused Jews to use their alleged control over the media to censor and delegitimize anti-Jewish criticism.

Let’s discuss another concrete example of Israel-focused anti-Semitism. A German author called Christian Ebener recently published a travelogue of a road trip through the Middle East that also brought him to Israel about which he writes:

“Our short stopover in this […] state and the three days on the boat [from Haifa to Lavrio, Greece, which involved an encounter with a Palestinian passenger] have revolutionized our idea of the Jews. I used to think that this religious community is one of the most persecuted and suffering groups of mankind, which was abused over and over again throughout history up to point of annihilation. But today, I have to recognize that this is only one side of the coin. The other side is that Jews, in spite of their bitter experience are no better, as they persecute and kill people of different nationality and faith with the same kind of brutality.”

Slurring Jews collectively as a people of culprits, this statement is clearly anti-Semitic. Equating Jews with Nazis, it also invokes the victim-perpetrator-inversion. A baseless vilification of Israel, which, without giving any evidence, except for the narrative of a random Palestinian on a boat, is slandered as a regime that conducts Nazi-like persecution and killings of national and religious minorities, is taken as a justification to condemn all Jews, be they Israeli or not. In addition to the quotation that you just mentioned, there is another paragraph in the same book, where Ebener questions the legitimacy of Israel’s very existence. This is another typical trope of contemporary anti-Semitism.

It would be absurd to suggest that such slander cannot be separated from founded criticism of particular Israeli policies.

Many people are concerned that anti-Semitism in Europe could further be aggravated by the massive influx of refugees from the Middle East.

Many of the refugees that have been pouring into Europe recently come from societies that are deeply anti-Semitic. It would be foolish to assume that their anti-Semitism can be educated away in a few years and that it won’t leave its mark on European societies.


Islamic communities contain 'tsunamis of atheism' that are being suppressed, says leading ex-Muslim Why ‘Brexit’ Will Strengthen NATO and the West