A Look Inside the Latest Gaza Women’s Flotilla 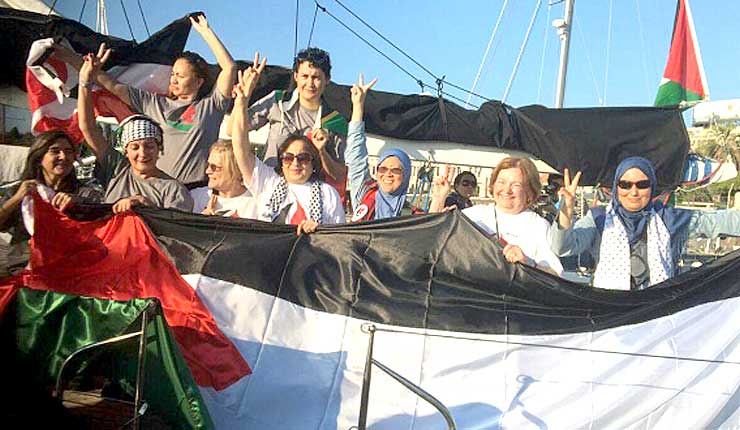 Last week, many world leaders flocked to Israel to pay their last respects to the late Shimon Peres. This week brings a very different breed of visitor: about two dozen women activists, headed to Gaza aboard two boats, hoping to break through Israel’s naval blockade and reach the Hamas-governed territory later in the week.

Who’s on board these love boats? As you can imagine, those whose moral compasses guide them straight into the arms of murderers who execute gays, oppress women, and spend every penny they get on planning and executing terrorist attacks. Like Ola Abed: she’s one of the people behind Gaza Man, a video game that encourages kids to shoot as many Israelis as they can, with extra points given for headshots. Too callous for your taste? Head over to Abed’s Facebook page and enjoy her frequent expressions of support for murderous attacks on Israeli civilians, or sample herTwitter feed for a taste of more uplifting calls for peace and love, like the hashtag #GiveUsWeapons.

The boats are sailing to Gaza from Barcelona, and these long nights at sea can get lonely, so Abed is lucky to have folks like Norsham Abu Bakr to keep her company. Abu Bakr, a Muslim Brotherhood supporter, has palled around with Hamas leader Ismail Haniyeh and has waxed poetic on her Facebook page, sharing posts that accuse the Mossad of orchestrating the recent terrorist attacks in Munich and Nice. It’s a sentiment Wendy Goldsmith probably shares—the London, Ontario social worker, another of the boat’s passengers, was a chatty guest on Kevin Barrett’s Truth Jihad, a radio show dedicated in large part to promoting the idea that the Zionist entity is behind every major bloody attack in recent memory, starting with 9/11.

Don’t find any of this troubling? Unmoved by discrimination directed exclusively at Jews? No worries: the bigotry of the women on board contains multitudes. Just ask passenger Fauzia Hasan, a Malaysian doctor who has openly advocated banning Sisters in Islam, a Muslim women’s movement working for gender equality within the religion.

And so, if you seriously support a resolution to the conflict between Israelis and Palestinians, pray that the Israeli navy swiftly takes over these boats before they reach Gaza’s terror-troubled shores, bringing this hateful journey to a peaceful end.