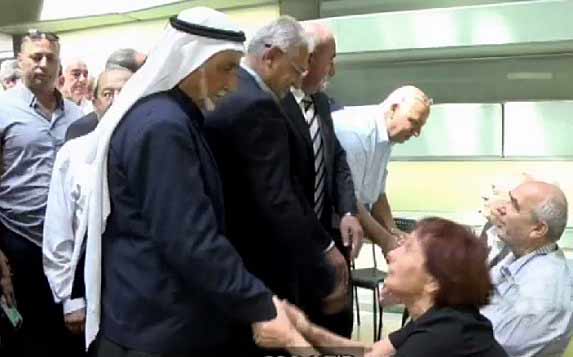 A group of some 150 Arab Israelis paid a condolence call on Tuesday to the family of the late former President Shimon Peres, just days after Arab Knesset members boycotted the elder stateman’s funeral, the Hebrew news site Wallareported.

According to the report, Hisham Zoabi — deputy chief of the Gilboa Regional Council in northern Israel — was among those who traveled to the Peres Center for Peace in Jaffa, where the family was sitting shiva, the traditional seven-day mourning period in Judaism.

“He did a lot for his people, his country and all the country’s citizens,” Zoabi was quoted by Walla as saying. “He viewed all people as human beings. He was a role model for leadership in Israel and the Middle East. I wish there were more such leaders both here and in the region as a whole.”

Zoabi also criticized Joint Arab List MKs for not attending Peres’ funeral, saying, “That is not our path. Coexistence is the only way to live in this country.”

On Sunday, a delegation of more than a dozen Arab mayors also visited the mourning Peres family.

Last week, as The Algemeiner reported, MK Ayman Odeh, chairman of the Joint Arab List, explained his decision to boycott Peres’ funeral by saying, “The memory of Peres in the [Israeli] Arab public is different from that of the narrative that has been recounted over the past few days, and I understand that such complex messages are hard to hear after someone’s death.”

Odeh went on to state that while credit should be given to Peres for his peace-seeking efforts and support for the Arab public during the 1990s, the same populace opposed “the hawk of the occupation and settlement construction, who nuclearized the Middle East, and unfortunately, also chose to support [Israeli Prime Minister Benjamin] Netanyahu and his policies.”

In 1994, Peres, who was foreign minister at the time, won the Nobel Peace Prize — along with then-Prime Minister Yitzhak Rabin and Palestine Liberation Organization Chairman Yasser Arafat — for the role he played in the signing of the Oslo Accords the year before.

His funeral on Mount Herzl in Jerusalem last Friday was attended by dignitaries from 70 countries worldwide — including US President Barack Obama and former President Bill Clinton.