Geert Wilders For Breitbart: Let’s Lock The Door To Islam 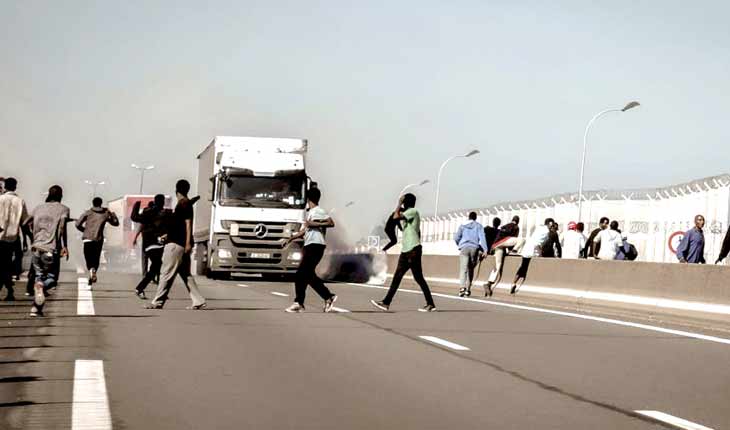 Yesterday, I visited Maassluis. It is a town near Rotterdam, where the indigenous Dutch inhabitants have become the victims of immigrant youths of Moroccan descent.

Cars have been demolished, houses vandalized, people threatened. The Dutch no longer feel free and safe in their own city. When the local radio station interviewed some of the victims and referred to the perpetrators as Moroccans, it received an anonymous letter: “You are racists! Your time will come! I won’t take care of it because I am too old. But our boys are the new soldiers.”

Maassluis. It is just one of the many Dutch towns and neighborhoods terrorized by Moroccan or Turkish youth gangs. Others are Schilderswijk, Oosterwei, Kanaleneiland, Zaandam, Helmond,… Not surprisingly, a poll shows that 43% of the Dutch people want fewer Moroccan immigrants in our country. These people are not racists; they are decent people, patriots who love their country and do not want to lose it.

The great Ronald Reagan once said that “Freedom is never more than one generation away from extinction.” These wise words are more true today than ever before. We are the free men and women of the West.
Freedom is our birthright. But if we fail to defend it, we are bound to lose it. And, sadly, that is exactly what is happening today.

2016’s Black Summer of Jihad, with terror attacks all over the free world, teaches us that the enemies of freedom are already among us. The ruling elites all over the Western world have accepted millions of people into our countries without demanding that they assimilate.

Many of these immigrants acquired our nationality. But some do not care for our country at all. They do not love it. They do not respect it. Nor do they respect us and our values.

They carry our passports, but they do not belong to us. They spit on our identity and behave like conquerors.
This is particularly true of many immigrants with an Islamic background. That is not surprising. Islam is a totalitarian ideology aimed at establishing tyrannical power over non-Muslims.

Islam commands its followers to make all nations submit to Islamic Sharia law, if necessary through the use of violence and terror.

Last week, we had an important debate in the Dutch Parliament. We discussed the future of our country. I pointed out that we will have no future if we do not de-islamize the Netherlands. Our time is a time for action.

Islam is an existential threat to our survival as a free nation. It violates all the basic principles and freedoms of our Constitution. It discriminates non-Muslims, who have no rights under Islamic Sharia law.
It discriminates women, who according to the Koran are worth only half a man. There is no freedom of religion under Islam. Apostates deserve the death penalty, the Koran tells Muslims that Jews are pigs and monkeys, and Christians have to submit or die.

Some seem to think that by allowing freedom to the enemies of freedom we prove that we stand for freedom. The opposite is true. By refusing to draw boundaries to our tolerance, we are handing away our freedom. If we continue being naive we will lose everything.

By depriving Islam of the means to destroy freedom, we are not violating freedom; we are preserving it. We should not turn freedom into a snake eating its own tail. Freedom requires a democracy willing to defend itself.
We need a political freedom agenda. It looks like this.

We must end all immigration from Islamic countries. There is more than enough Islam in our countries already. Eurostat, the European Union’s statistical office, expects 77 million immigrants to enter Europe in the next half century. Most of them are Islamic.

If we do not stop them, we will be facing a catastrophe. We will be colonized and Islamized. We will cease to exist. We can already see how disruptive relatively small groups are. Research by the University of Amsterdam showed that 11% of the Muslims in the Netherlands are prepared to use violence for the sake of Islam. This is more than 100,000 people.

The more Islam we get, the more dangerous and less free our society becomes. Let us keep our countries safe. And lock the door to Islam.

We must also stimulate voluntary remigration of those who are already here. And those who stay must adopt our values; they must assimilate and integrate.

It is not extremist to demand that Muslims, who want to live in our midst, renounce the hateful doctrine and texts of Islam and abide by our laws. If they commit crimes, act against our laws, impose Sharia law, or wage jihad, we must expel them. My party wants to strip all criminals with dual nationalities of their Dutch nationality and expel them to the country of their other nationality.

These measures are part of our de-islamization plans and have been on our party platform for over ten years.
And, finally, in order to remain free, we must honor our freedoms by using them. That is why I will never give up my freedom of speech. Not in parliament nor anywhere else.

I have been dragged to court for asking party members at a meeting whether they want more or fewer Moroccans in the Netherlands. 65% of Dutch Moroccan youths have been suspected of criminal activities. They are six times as often suspects of violent crime as indigenous Dutch, and 22 times as often of hold-ups and street robberies.

They also constitute almost 80% of the Dutch jihadis traveling fighting in Syria for IS. Just last week, a Dutch Moroccan was arrested in Rotterdam for supplying French jihadis with Kalashnikovs and explosives. Nevertheless, according to the public prosecutor, asking Dutch voters whether they want more or less Moroccans in the Netherlands is a criminal offense.

But no matter the outcome of the trial, I will keep speaking. No judge will ever be able to silence me. And no jihadist will succeed either. For twelve years already, I have been on the death list of several Islamic terror organizations, from al-Qaeda to IS and the Taliban. I am under 24/7 protection by the police. I live in a safe house, am driven around in armored cars, have to wear bullet proof vests in public, and have to stand trial in converted bunkers. But I will never shut up.

The more they try to do so, the louder I will speak.

It is time to raise our voices. Let them sound like thunder: Freedom has a price. The price is to always defend it, no matter the consequences. To be brave and let no-one bully us into submission. So, let us do our duty and ensure that Reagan’s warning never becomes a reality: Extinction is not an option! Freedom or Islam. You cannot have it both ways. There is no middle way.