Double Standards for Aleppo and Gaza 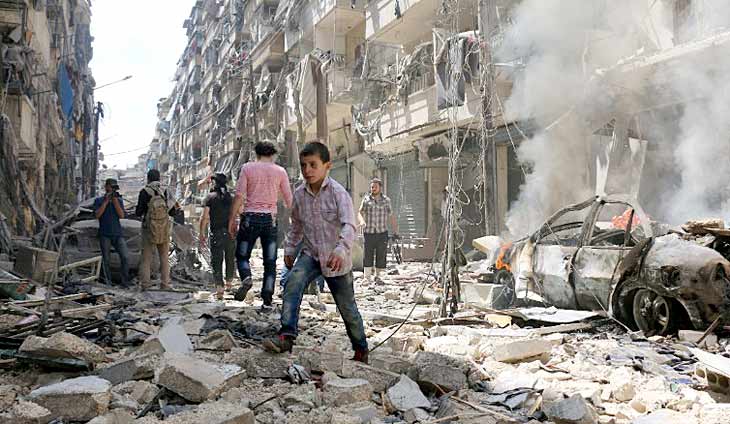 Make no mistake, the carnage taking place in Aleppo right now is a disgrace to the international community.

The Syrian government and Russian-backed forces are reportedly using chemical weapons, barrel bombs and increasingly powerful explosives to target innocent men, women and children. While rebel fighters have undoubtedly embedded themselves in the city in fortified positions, it appears that the civilian population is bearing the brunt of the conflict.

While there has been some condemnation from the UN, where are the protests on the streets of European capitals and where is the media frenzy about this disgrace?

Had Israel been involved, or had the IDF aimed one solitary munition at Aleppo, I think the response would be much different.

The international community’s condemnation of the Assad regime and Putin’s Russia is nothing compared to the vitriol leveled against Israel for its far more restrained (and completely justified) 2014 operation against Hamas in Gaza.

Unfortunately for the 250,000 residents of Aleppo, the city is not being attacked by the IDF. There are no leaflets being dropped warning civilians to evacuate areas in the line of fire. There is no “roof knocking” — where non-explosive devices are dropped on the roofs of targeted buildings to give civilians time to flee. And judging by the number of civilian casualties and the extent of the destruction in Syria, there is very little to no concern for the well-being of innocent civilians.

Aleppo is a testament to the double standards at play when it comes to the treatment of Israel’s military operations. There is, however, a caveat. The IDF should be held to higher standards than the militaries of both Syria and Russia.

And that is why The Sunday Times of London caught my eye recently. One story was headlined “Putin’s gigantic firebombs torch Aleppo.” Next to it was an article entitled, “RAF drone crew divert missile to save ‘civilian’ seconds from death.”

The dissonance between the two stories is striking. On one side, we have the alleged deployment by Russia of a weapon “capable of blasting a massive ball of flame across wide areas of Aleppo.” On the other, the release of a video by Britain’s Royal Air Force showing a drone missile aimed at ISIS terrorists being diverted at the last minute to avoid killing a civilian.

One side was indiscriminately firebombing, while the other was deliberately acting to prevent civilian casualties.

The RAF evidently felt that its tale was a positive story, which showed that its drone squadrons act both ethically and in accordance with international law. Why is this news? Israel released many videos from incidents where missiles targeting Hamas terrorists were diverted due to the presence of Palestinian civilians. So why then were Israel’s identical efforts not deemed newsworthy?

Granted, the Sunday Times is a British newspaper covering the British military, but the UK press has never been shy about devoting many column inches to Israel and the Palestinians.

Israeli efforts to minimize civilian casualties go unreported or even ignored by the press, and Israel instead finds itself regularly judged in the court of public opinion, which is led by a lazy or hostile media.

If and when the Syrian conflict comes to an end, will anyone be held to account for what certainly appear, at face value, to be genuine war crimes? Will there be a UN investigation and a Goldstone-style report? Will the International Criminal Court issue indictments? Given Russian involvement and the lack of American global power projection, it is unlikely that anyone will be held to account.

The next time open conflict between Israel and Hamas breaks out, will the parameters of judgment have changed as a result of the carnage in Aleppo and other parts of Syria? Or will Israel continue to be held to a standard of behavior unlike any other military in the world?

The likelihood is that nothing will have changed when it comes to how Israel is treated, and we will be left to conclude that, ultimately, the world will be outraged by Israel defending itself and its citizens irrespective of how ethically it behaves.


Bahraini Writer: I Was Shocked To Discover How Many Young Arabs Idolize Adolf Hitler Copenhagen IN FLAMES: Denmark hit by arson attacks as rampaging thugs remain on the lose